Fifth Floor is a female Country – Rock Duo from Sweden. Moa and Matilda met at a University in London and bonded over their shared love for the band McFly – it is always lovely when music brings people together, even if it isn’t Country ha! 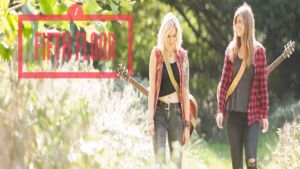 Once they became friends, Matilda encouraged Moa to watch ABC’s Nashville series and she was then converted to Country Music. Together, their influences are Miranda Lambert and Little Big Town, to name a couple.

Since forming in 2014, the duo have built a strong set list that landed them an invite to perform outside the BBC Building in London for BBC Music Day 2015, and at the Yamaha Music Store for their 2016 Soho Hoedown.

I have spent the last few days listening to their EP and share my thoughts below:

Never having heard of them before being sent the EP, I was unsure what to expect. Going straight into the first track You’re Not In The Picture Anymore, I instantly liked what I heard. With a summer-sounding, upbeat intro, which reminded me of Sweet Home Alabama, I found myself tapping my foot and humming along until I knew the words. Moa and Matilda have very sweet voices and sing very clearly with well blended harmonies and a rocky edge to both their vocals.

You’re Not In The Picture Anymore is, in my opinion, a cross of Country, Pop-Punk and Pop- Rock. I don’t often hear artists like Fifth Floor anymore which is a shame because back in the late 90’s/ early 00’s, they were exactly the type of artist I constantly listened to. Bands like Letters To Cleo and Pretty Girls Make Graves spring to mind and mix that with a bit of Country – you have Fifth Floor. This song has a very catchy chorus and I really like it. I would say this is my favourite track off the EP.

Drink It Away – their current single – is another nice catchy song. A fun-lovin’ feel good track, I would say motivational too but, because the lyrics are about drinking away your troubles, I don’t want to be personally responsible for encouraging that – ha! But in all seriousness, the overall message is great – to leave troubles behind and not let things weigh you down. It is an upbeat track, with a good melody and a memorable chorus.

Where The Credits Roll – is a ballad and a very sweet song – a bit of a heartbreaking song, which has a really lovely melody. The chorus is very powerful and has a nice bridge too. I would love to hear this live. It’s one of those songs where you can picture a music video in the rain or in a house looking out of the window.

Ghost Town – the rockiest track on the EP, especially with the guitar solo. The song has a marching type beat to it with a chanting chorus. I like the lyrics to this song, it’s an interesting story but I won’t give the lyrics away as you will have to listen to it yourselves of course.

These songs very much remind me of the demo days of Taylor Swift’s unreleased songs. I say unreleased but every single one of those songs was album-worthy so it is definitely a compliment.

Overall, a more than great effort for a first EP and I look forward to any future music they bring out. I can see Fifth Floor only getting better and better as their music career progresses.

Fifth Floor EP is released June 6th and can be  ordered here:

Don Gallardo at the Hut