Don Gallardo at the Hut, Corby 19th May 2016.
Support from Buffalo Canyon.

Ok, anyone that read my last review of The Hut might be forgiven for thinking that a sticky, student rock venue cannot be transformed into an atmospheric, Bluebird Café type room space. Well, Grievous Angel Promotions took on board the suggestions from the last gig and miracles really do happen. Upon entering the Corby venue, twinkling candles on tables scattered on the bottom floor of the building transformed it immediately into a warmer, more inviting place that my friends & I were more than happy to spend a few hours in, listening to fabulous music. It gave the venue the credibility that was required for the calibre of artist that was headlining that night. The only downside of the night is that ticket sales were still poor for the quality of the artists performing – where are all the Americana/Country fans in Northamptonshire? Don Gallardo told me that this gig had the lowest amount of gig goers on their UK tour. Local music lovers should be tripping over themselves to get to a Grievous Angel gig as they will not be disappointed.

So to set the scene, a Gram Parsons framed picture and t-shirt are propped up against the wall, providing a backdrop of sorts. Local band, Buffalo Canyon, open the night with a solid support slot. They usually perform as a 5 piece alt country, indie Americana sound band but tonight the band are stripped back with just lead singer and guitarist, Colin McGreevy & Gary Grant on lead guitar. Their song ‘Cocaine Dreams’ has a Pink Floyd sound (which is particularly appealing as I am a huge Pink Floyd fan) and this moves smoothly into a Felice Brothers cover ‘Forever Green’. They have changed arrangements on their songs as they are more guitar based for this gig, although I have nothing to compare with having not heard the full band yet – an experience I’m really looking forward to on the strength of this performance. They perform a superb cover of the Water Liars song ‘Swannanoa’ and Colin’s vocals are powerful and emotive. He lets the audience know that they are giving away free CDs and quips that they are selling t-shirts at the back of the room for ten bucks and thanks the promoter, Paul, for putting on these nights in Corby. Yes, I agree – thanks Paul! ‘Superman’ is subtle and understated and moves into ‘This is the Hurt that Drinks You’ (? I hope this is the title of the song, either that or I can’t read my own handwriting!). The pace picks up for this song and again, Colin delivers some powerful vocals. ‘Get Your Best Dress On’ gave us a glimpse of his vocal range and Gary the chance to play some superb lead guitar and whether they hear it or not, a very definite nod to Dave Gilmour’s sound with Pink Floyd with a very competent guitar solo. I loved this song and Buffalo Canyon actually made me feel a little guilty that I only had my jeans on!

Buffalo Canyon are playing Foxton Locks Festival, near Market Harborough on the 18th June this year and I thoroughly recommend you go and check them out. 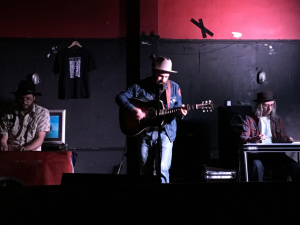 Don Gallardo takes to the stage minus his bassist Travis, who has had to fly back to the USA, with Clubhouse Records house musicians and The Dreaming Spires, Thomas Collison on keys and Allan J Kelly from the The Rosellys on pedal steel. He takes great delight in telling us the home towns of both – Hastings & Watford respectively, much to the audience’s delight! Don’s music has featured on both ABC’s Nashville & The Vampire Diaries and he hails from California but has lived in Nashville for about the last decade. Don is both relaxed and at ease with the audience, rocking double denim and a fedora.

You can feel the room warm to him immediately and his opener ‘Down in the Valley’ from his 4th studio album ‘Hickory’ is a nod to the laid back Californian style that Don grew up around. He tells the eager crowd that he’ll consider requests as long as nobody asks for ‘Wagon Wheel’ (I hear a couple of groans in the crowd!) and then slips into ‘Diamonds & Gold’. His effortless vocal is complemented by fantastic accompaniment and backing vocals from his two Clubhouse Records colleagues. Like Paul McClure (another Clubhouse Records artist who I had the pleasure of reviewing recently) Don also tells entertaining stories behind his songs. I absolutely love hearing these as they give the music and lyrics another dimension and make the songs so relatable on a personal level. ‘Hey Julia’ from The Art of Troublesome Times was written by Danny West, Don’s friend from North California. He was a colourful character who rode a 10 speed bike, wearing a full suit and a wide smile. Don tweaked chords and bam – ‘Hey Julia’ comes to life – a wonderful song that makes you tap your feet and we are even treated to a bit of ‘Don dancing’, a sight that makes you want to jump up and dance with him. His songs are passionate and honest, with lyrics such as “I get blown away when I get turned away” when describing the fickle music industry’s highs and lows and the “sometimes swirling inbetween”.

His first song recorded in Nashville is next, ‘Before the Devil Knows He’s Dead’ and is another storming, toe tapper of a song. ‘Midnight Sounds’ follows as smoothly as his vocals and draws you in deeper, along with the story of how he wrote this after living in a 1 bedroom apartment in LA where his bed was next to the wall of the lobby and his experiences of listening to 2½ years of drunken shenanigans. Next is the song ‘Broken’, which featured on the soundtrack to the film ‘Bad Grandpa’ and ‘The Way That It Is’, which never made the cut onto the new album as it wasn’t to their liking. It has a big chorus and maybe is a touch more commercial than the other songs which made the album. I actually really liked it and hope it makes the next one! ‘Bluebird’ is next, a beautiful song which was featured on Nashville when Brad Paisley and Juliet are chatting backstage at the Ryman and another wonderful story about an old buddy who worked on an organic farm in North California who lost his mind, found it again, lost it again and now teaches children in school in LA. He’s doing OK though, so don’t worry…”

The Hut’s light system at this point seemed to develop a mind of its own and Don and the boys were bathed in an ethereal sequence of red, green, yellow, blue and white light. A little off putting if you were watching but it didn’t phase them at all and it seemed to fit the angsty love song ‘Banks of the Mississippi’. This song had a rocky edge mixed with great pedal steel and fantastic vocals. ‘The Homeplace’ followed which is beautiful and very relevant, ‘Ophelia We Cry’ – heartfelt, old time country (an ode to Levon Helm) and sound of a ragtime piano which was a perfect accompaniment with a beautiful finish. Don switched his guitar to a mandolin for ‘Home’ and The Hut was reverberating to the wonderful pedal steel once more. ‘When the World Wakes Up’ brought us back to a more modern sound and ‘North Dakota Blues’ (one of my personal favourites) shook The Hut, to the delight of everybody in it, with its tales comparative of bad guys in old western movies. Any song that can rhyme risky with whiskey is a sure-fire winner in my book. We are treated to one more song after cries of ‘more’ echo around the room. Nobody wants this night to end but ‘Burgundy Wine’ draws the evening to a close.

Don Gallardo’s effortless ability to draw you into his little piece of the world is truly refreshing. His music seems to transcend any particular label you could try to put on it. His vocals are at times both subtle and incredibly powerful and you can guarantee that you are going to be thoroughly entertained and educated at the same time. I was surprised to find out that this is Don’s 7th UK tour and I have only just discovered him. You can guarantee that I will be at the 8th. 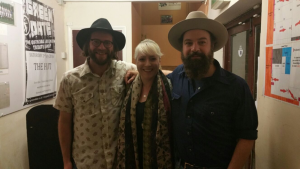