Erin Rae And The Meanwhiles 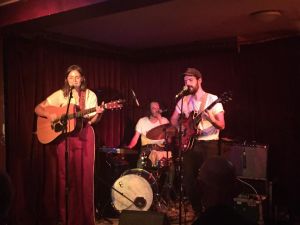 Introduced to the music of Erin Rae via Cale Tyson when she supported him on tour here in the UK last year, I was immediately drawn to her hypnotically smooth vocals and quickly became a fan of her thought provoking song writing too.

A blend of trad country/folk/Americana ( if I had to describe her style ) her debut album ” Soon Enough” contains tracks dealing with hard hitting subjects and situations very personal to this Nashville raised artist, in fact so personal that all bar one ( an Andrew Combs co write) were solo writes. And if the two singles released recently ahead her forthcoming sophomore album “ Putting on Airs” are anything to go there is more of the same to look forwards to. Well known in music city as a backing vocalist for numerous artists including Margo Price and Anderson East she is thankfully now making a name for herself as a songwriter/recording artist in her own right, and I headed to London’s intimate Green Note on a baking hot evening excited to see Erin on her first UK headline tour on which she is joined this time by her own musicians, hoping to hear more of her new material as well as already familiar numbers from her first album.

And that is exactly what was delivered in her hour long set, which started with a run of songs from that current album and her EP “Playing Old Games” ( a UK only release!) before she showcased new material, telling us the next album was recorded in February in an old monastery in Wisconsin, snow on the ground….what a wonderful image that conjures up!

I bumped into the lady herself at the bar shortly after I arrived, amazingly she immediately remembered me (hopefully for good reasons! ) and said she was so happy with the way the tour was going and how much fun it was being on the road with her band members. Apparently the new album is actually completed but may not be released til early 2018 and this time every single track is a solo write. 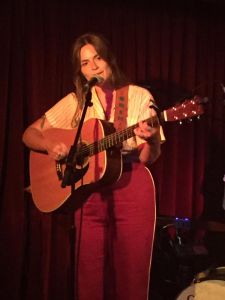 Like Erin’s music, they had a sound reminiscent of that emanating from 70’s Greenwich Village, and amusingly when they tried to play what they called something ” a bit more pop!” a guitar string broke not once but twice! Karma??

Anyway they were well received by the attentive audience ( always an appreciative and polite crowd at this venue, and as usual the sound throughout the evening was fantastic) and I will definitely keep an eye on their tour schedule.
Erin and her two musicians ( Dom Billett on drums/bass/many other things! and Jerry Bernhardt on lead guitar/harmonica) took to the stage after a short break, and her set got underway with the opening track from her first album, ” Light” . Immediately the pure and dreamlike voice that had attracted me last year impressed me once more, supported by some wonderful backing vocals throughout from her band members. Often a picture of intense concentration with eyes closed, Erin would suddenly beam at the audience with a radiant smile when performing, leaving no one in doubt of her love for her craft. Songs often had a succinct introduction such as “ Minolta’ (“ like the old film camera” ) and “ Old Games” ( “about doing things over and over again”) . I was pleased one of my favourites, “ Pretty Things” made the set list ( which she joked she had written in pencil and could hardly see!), she told how it was inspired by her obsession with the dust bowl and the great depression when she was a child (“ what does that say about me? she asked wryly!) before summing it up as being about ” perseverance through hard times” . The short guitar solo end of this one gave us a taste of Jerry’s great playing. Erin trademark tempo throughout nearly all her writing is pretty slow which is perfect for her voice and for conveying the deep lyrical content, so she gave us prior warning before playing “ Futile Attempts”, written for her Dad a few years back, that we should watch out as it’s “ kinda groovy!” and said afterwards “ that was kind of fun! “!.

There were four of her new compositions showcased, starting with “ Can’t Cut Loose “ ( “ about letting go of things that aren’t good for you any more” ) “ Putting on Airs” ( about realising you’re full of shit!” ) and the afore mentioned two singles which have been released in quick succession. “ Like The First Time” is simply a stunning song full of regret and sorrow about not being able to make your partner feel the way about you that they did at the start of the relationship, but my favourite has to be the newer release, “ Wild Blue Wind” which Erin described as being about “ crazy people” but is much more than that of course! Drawing on her experiences of working with patients with mental health issues she describes someone’s descent into a dark, drug fuelled existence…. “ Aint no telling where he goes, out through a hole in his mind I suppose”…. as she watches powerless to help but reassures him that things willget better but “ I don’t know when” ( I love how a lot of her writing is ultimately optimistic).

Returning to more familiar ( to a lot of the audience!) songs with “ Clean Slate”

‘ Monticello” ( “ about realising your not a kid anymore”), thanks were rightfully given to Oscar the sound engineer and the venue in general before the wonderful evening ended with “ Rose Color” and I wandered out to face reality after being all too briefly transported many miles away from the hustle and bustle NW London .

As I write there are a few more dates of this tour ( including a set at the Maverick Festival ) and I’m sure I’m not the only one who has caught her on this visit that really hopes she returns to promote her new album, which I just can’t wait to get my ears round!