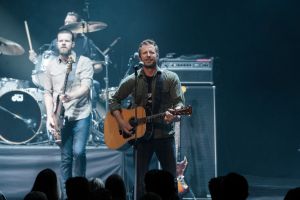 Firstly, can I say I’m hugely grateful to Hannah Compton for writing a fabulous review which has enabled me to skip citing his set list, analysing and celebrating each song and means I can just concentrate on the main highlights of the night for me. Having already seen Platinum selling artist Dierks at the O2 for C2C2014, I had extremely high expectations which were by no means thwarted by the end of the night – just the opposite.  He had me at ‘Wish You Were Here’ one of my all-time favourite Pink Floyd songs back then in London and I knew this would be the start of a beautiful relationship.

The night started early in the afternoon with the electric atmosphere in the queue outside the Apollo.  You’ll never meet a friendlier crowd of people than a ‘country music loving’ crowd of people!  The realisation that A) It’s Friday and B) you’re about to see Dierks Bentley was already creating a huge wave of anticipation. Cue the cracking sound of a can of JD & Coke being opened to ward off the chill as the rain started to fall on the queue, but hey, we are hard-core Country fans so rain, do your worst!  What would Dierks do?  These country boys are outdoor, mud loving, weathered by the elements types, so I’m not letting the side down by sloping off to drink in the pub, I’m rearing to go in pole position. 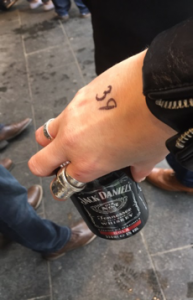 Hands are numbered so nobody loses their place when the barriers go up in another hour, reminiscent of when I used to be in the Bon Jovi Fan Club, staking your pitch early so you could get closer to God!  I thought I’d grown out of that adolescent behaviour but country music has awakened the beast and now I’m soaking wet and sitting in the third row from the front, I did momentarily wish I’d maybe had a few in the pub to warm me up but that’s what Dierks had reduced me to.  All sense had flown out of that Apollo door as the clock hit 7pm and grown women (and men) ran to secure their seats. Even when the girl behind me, stood up to let a person past and somehow managed to empty her entire glass of Pepsi all over me, we still exchanged Facebook names and bought each other a beer such was the feeling of love and goodwill in the room.

Tucker Beathard supported on this tour and made a real impression with the crowd.  He showed what can be done with an acoustic guitar, a good voice, rebellious attitude and great songs.  His set really warmed the crowd up and the anticipation which built up can be attributed to Tucker for achieving this.  He particularly enamoured me with his new single Rock On and I am looking forward to hearing a lot more of this new artist. 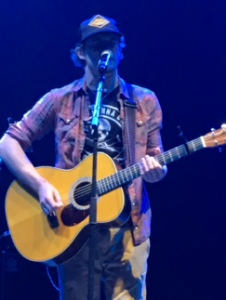 The Bluegrass opening bars of ‘Up on The Ridge’ with banjo, fiddle & guitars caused an explosion of cheering and the Dierks party had started.  He jokingly stumbled around the stage, guitar in hand, emulating someone who’d had a few drinks and was taken aback at the reaction and roar of the crowd.  His ability to interact with and work the crowd makes him, I personally think, one of the best in his field.  His voice is like melted chocolate with a good handful of grits thrown in.

His style laid back and understated and his range of material showcases his happy go lucky, jokey song writing skills on tracks such as ‘Am I the Only One’, ‘Somewhere On a Beach’ and ‘Drunk On a Plane’ but then hits you right in the chest with masterpieces like ‘I Hold On’, ‘Riser’, and ‘I’ll Be The Moon’. 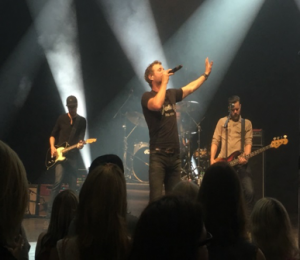 The evening went in a blur of singing, dancing, laughing and crying. I sang my heart out – Dierks even made eye contact and crooned a couple of lines of ‘I Hold On’ to my friend who had changed into her new ‘I Hold On’ tour t-shirt in the toilets beforehand.  Good work Mary!  I danced – particularly crazily to 5150, which to this day is the code to my IPhone and IPad. There, my secret is out!  I laughed out loud quite frequently, notably more so when my friend, Paul, got hauled up onto the stage with Dierks to down a shot of Petron out of a red solo cup! That shot has kept him flying all week and I’m sure that story will be told to the children and the grandchildren for years to come. Then I cried…first with a genuine tear during his tribute to Merle Haggard covering ‘The Running Kind’ and secondly with laughter at Dierks’ attempt at a mini stage dive during ‘Somewhere On a Beach’, which was quickly averted from becoming a disaster by a rather burly security guard who found it highly amusing as he lunged to rescue him! 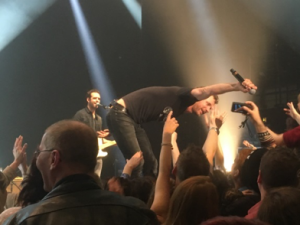 The end of the night will stick in my mind for a very long time, with the strains and chorus of ‘Drunk On a Plane’ being belted out by thousands of Dierks Bentley fans having the time of their life.  He has cemented his ‘Legend of Modern Country Music’ status in my house at least and I have a sneaking feeling that there will be other houses across the UK, reverberating to the sound of his music this week and in the months, hopefully years to come…

What Country means To Me