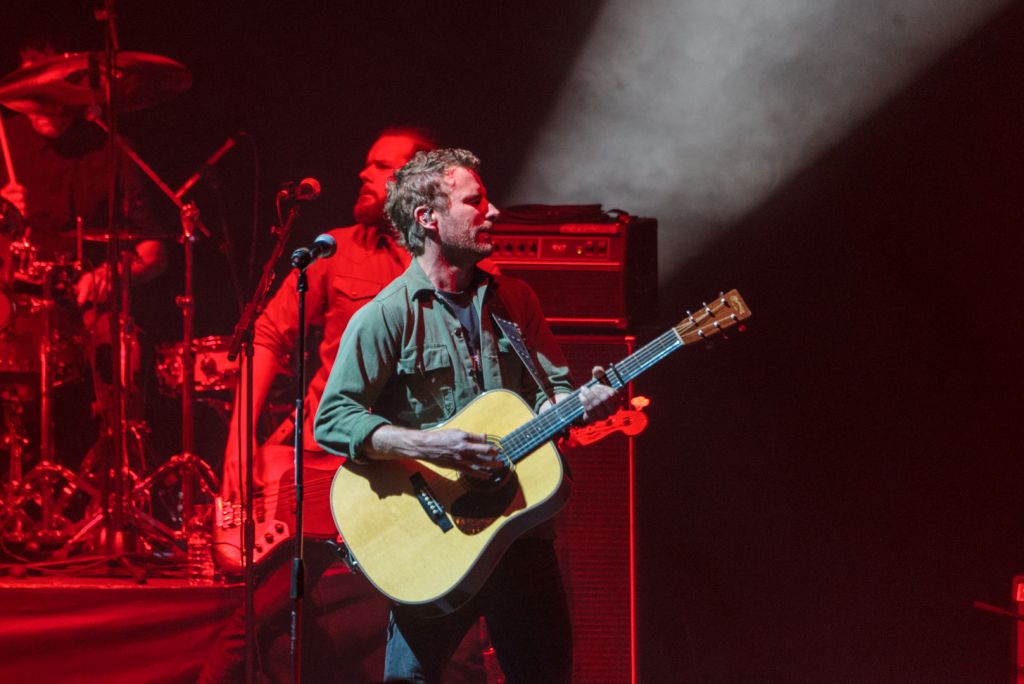 Friday April 22nd saw the return of Country superstar Dierks Bentley at London’s Hammersmith Apollo.  Dierks was last over for the C2C Festival back in 2014. Being a massive hit during the festival, his return was eagerly anticipated although the ticket pricing seemed to put a few people off, especially considering Kip Moore was touring the same week for half the price. This might have been part of the reason why Dierks’ tour did not sell out and why he had to cancel his Manchester show, which is a shame as he is truly one of the best artists in Country Music today.

A few weeks before the show, it was announced that the standing area at Hammersmith Apollo was now unreserved seating, which I was happy with, but again showed that London had not sold as well as expected – if it had been left as a standing area, the venue might have looked half empty.

Arriving in the pouring rain at about 5pm, the queues were already starting to get rather busy. Listening to music loudly from someone’s iPod, the whole queue started singing “I’m getting drunk in a queue” – a play on words to Dierks’ hit “Drunk On A Plane”. It was then apparent we had all forgotten about the rain and were raring to go.

As soon as the doors opened at 7pm, there was a mad rush to the front for the unreserved seating. Luckily, our group secured our front row seats.

The support act was a new artist and on Taste of Country’s ‘Artist to watch’ list – Tucker Beathard, who I personally had never heard of. A 21 year old singer/songwriter, also known as being the inspiration behind Eric Church’s song Homeboy, Tucker wowed the audience from the start with his stage presence, wit and, of course, good music. He immediately reminded me of a young Dierks, not that Dierks is old, but you get my meaning. His songs were played acoustically – it was just him and his guitar. I would love to see him with a full band one day.

Stand-out performances were the single Rock On, which he performed last, and Momma And Jesus. There was not a bad song on his set list and although it was the first time I had heard any of them, I actually remembered them all when searching for them after the show.

The atmosphere for Tucker was energetic and he seemed very overwhelmed. He definitely made a good impression amongst the UK fans and will certainly be welcomed back. As he is so young, I can only see a bright future for him, with just as much a successful career as Dierks. After all, once, Dierks too was just ‘that guy and his guitar’ standing on a stage on someone else’s tour.

The whole house stood up just before Dierks’ entrance. His band came on first and got the vibe going with the intro to the popular single Up On The Ridge, from his 2010 album with the same title.  The audience sang along to every word and were dancing along. By the second song, Free And Easy (Down The Road I Go), a massive surge of people – or should I say women – stormed to the front of the stage. With the stage itself being so low, I was slightly concerned for his safety. Free And Easy is by far one of Dierks’ more fun tracks which features on his 2006 album Long Trip Alone. With the title being repeated throughout the song, it’s one of those songs everyone can sing along to. 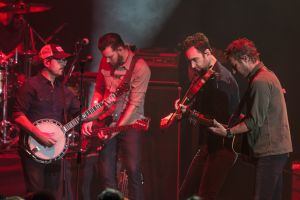 The next song he performed was the single Tip It On Back, from the album Home. Slightly more of a chilled song, but it didn’t dampen the audience as it’s one of those must-see songs live. At this point I had almost forgotten just how many great songs Dierks actually has and that he is already on his eighth studio album.

The ‘mad’ crowd were soon back in full force straight after, when he sang Am I The Only One? This is one of those sing-a-long moments that you wait for at a gig. It’s a definite crowd pleaser with great music accompaniment from the band, which was phenomenal throughout the evening, interacting with the crowd, ensuring every corner of the audience was given attention. I enjoy watching the band of a solo artist give their all and gain the audience’s respect and love.

Dierks is definitely a showman. Running around, taking advantage of the entire stage space, he made everyone in the room feel important, especially women in the front row. He grabbed the hands of a few ladies and spun them round, making their evening.

The energising 5150 kept everyone jumping up and singing and people with handmade T-shirts with the song’s lyrics did not go unnoticed by Dierks. Seeing this, he sat on the stage to sing with a woman in said T-shirt, proving he is not afraid of a little crowd interaction – in fact so much so that later, a slightly failed attempt at a crowd surf showed he was fearless. I can’t imagine anything more scary than throwing yourself amongst a crowd of women. He survived it though…just, with a little help from his one security man. It was like being in an episode of The Walking Dead – with all the people grabbing him, I was half expecting to be knocked out by a flying limb or two.  I even felt like checking him for bite marks – actually, it would not surprise me if he did in fact have some – ha! If you thought Ladies night was bad, well you haven’t seen anything yet! Still..he didn’t seem to mind!

Sadly not doing too many tracks from the album Riser, I was delighted when he sang Say You Do. Again a downbeat song, but still a favourite amongst fans. It sounded beautiful with everyone singing it back to him.

After performing Every Mile A Memory, which isn’t a favourite of mine but still good, he sang I Hold On from his seventh studio album Riser.  This was a must-have on the set list for me, as it was the song that made me pay even closer attention to Dierks rather than the odd song here and there. I love witnessing the live version of I Hold On, a song close to his heart – you can really see the emotion in his face and hear it in his voice. I love the fact he still plays the very same guitar he sings about in the second verse and how it’s better than brand new and that it’s had his back in a million bars. The band played the intro to the song spot on, doing it even more justice than the studio version.

Now, I am aware that the UK fans tend to listen to more of an artist’s album tracks –  well every song – and know every word to every song. However,  I never really gave much thought as to the Impact it has on an artist – even to the extent that they will cut a single off the set list, if had unsuccessful charting in the US.  So when Dierks announced the next song on the set list as Riser, we were thrilled.  Hand written on the set list as a last minute addition, Dierks apologised for not playing it on previous nights and explained that, as much as he loved the song and, as Important as it was to him, the single did not do well in the US, so he doesn’t play it. It was only when everyone on social media and in the ‘meet and greets’ begged for the song, that he realised just how much we, the UK fans, embrace Riser. It is one of the best tracks on the album – it’s beautiful both musically and lyrically with such an inspirational message. Perhaps it’s because it’s not uptempo and catchy that it did not do so well in the US? Overwhelmed by the response, Dierks thanked the crowd for their reaction to the song and for singing along. 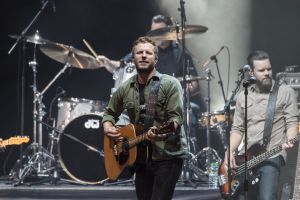 Then another new song, Freedom, from the upcoming album Black – again a fair few in the audience knowing the words was a nice thing to witness. I personally did not know it and not being released yet, I cannot remember it – but look forward to hearing it again when the album is released.

Dierks then spoke of requests he had for a tribute to recently deceased Prince. A musical god, Dierks felt he could not do any of his songs justice and at best he could possibly do a not so great version of Purple Rain. Instead, he chose to do a rather more crowd-fitting tribute to the also late great Country Legend Merle Haggard with a cover of The Running Kind.

Next, A Lot Of Leavin’ Left To Do – a much more country twanging track than a lot of songs so far. I found myself feeling like I was in Downtown Nashville – I absolutely loved it live.

The title track off his new album Black followed and, shortly after that, the  currently successful single Somewhere On A Beach, also from the new album. With the solo guitar riff at the beginning from his band, which provided a stunning echo, this song is so much better live.

The crowd became very rowdy during What Was I Thinkin’, so much so, I have no memory of this song being performed – haha! I think I was in too much shock – people seemed to appear from nowhere. A girl even jumped on stage but was soon taken away by security.

Supposedly finishing with a very country sounding Sideways, Dierks returned to the stage with I’ll Be The Moon, which features Maren Morris on the studio version but she did not join him on stage. That didn’t take anything away from the song as it was just as good with Dierks singing it alone. With it being more of a ballad, we knew he would do at least one more song before the night was over.

So, of course, the night could not end without Drunk On A Plane, the song most people had been waiting for, especially as it’s his most successful song recently. It’s also most catchy and memorable –  that doesn’t mean it’s not a great song because it really is. With added choruses for crowd purposes, the atmosphere was wild.

Dierks had appeared very emotional and overwhelmed with the crowd reaction throughout the night. At one point during the night he even said he was concerned, once he heard it would be all seating, that no one would get up but was pleased that we were standing up enjoying ourselves from the start.

I had such a wonderful night, it was amazing, electrifying, energetic and mad all at once. I would urge anyone to go see Dierks live. I hope he doesn’t leave it too long again until he returns.

Dierks new album Black will be released May 27th.