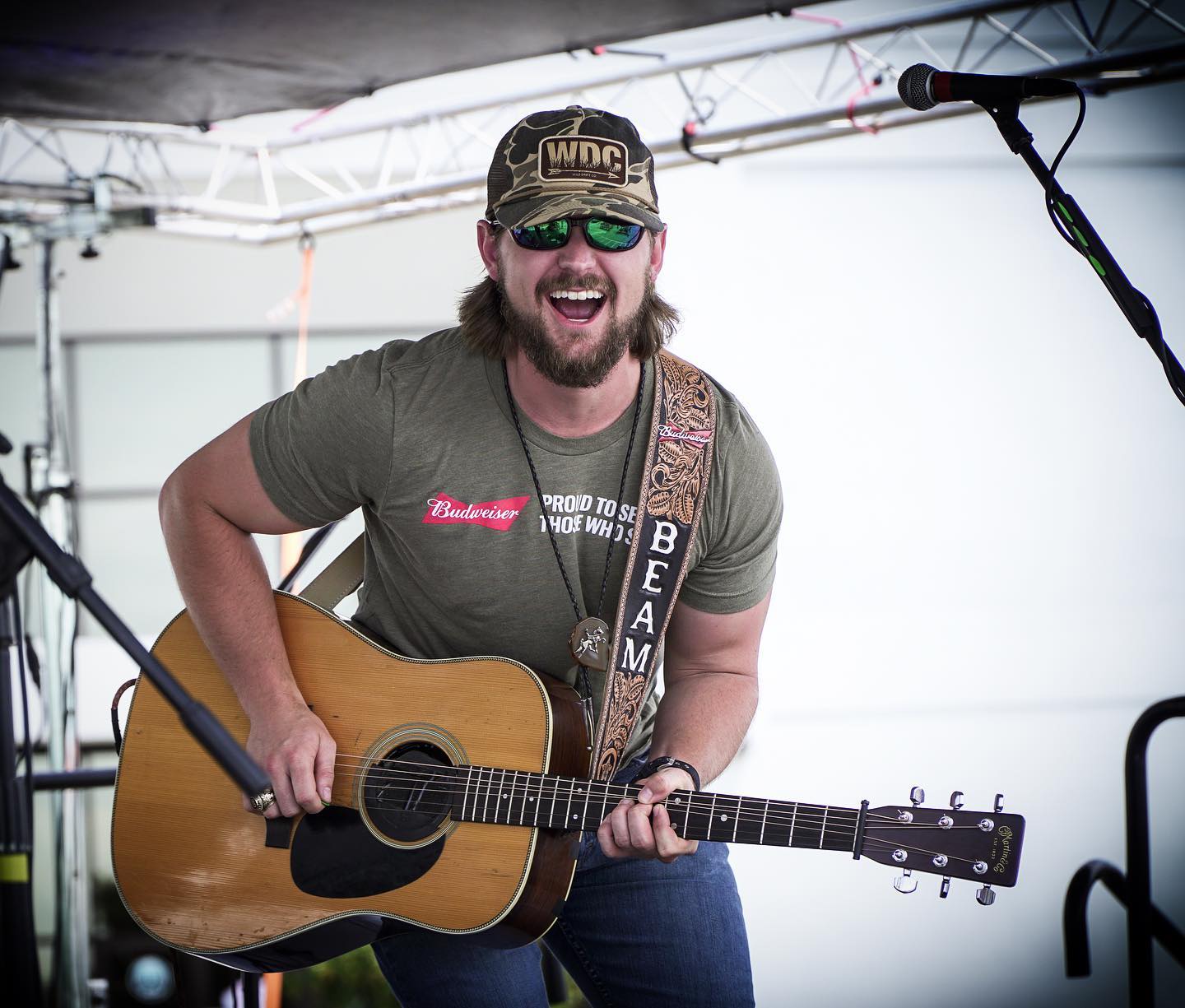 It was our first time talking with South Carolina artist Andrew Beam.  We learned a good deal in a short amount of time, as you’ll see right here in our CRS 2021 interview.

Patti McClintic:  Hi Andrew, I’m Patti from Think Country.  It’s good to meet you, even though it’s over a screen.  That’s the way we do things these days, I guess.  You’re from North Carolina, correct?

Andrew Beam:   Originally, I’m from North Carolina, and long story short, I went to Clemson University and got hired on by the state of South Carolina as a game warden.  They sent me to Charleston, South Carolina, on the coast, and that’s where I’m based out of now.

Patti McClintic:  So, your doing music and you’re not even in Nashville.

Andrew Beam:  Full-time music.  I left my full-time job back in May of 2018 and never looked back.

Patti McClintic:  No, it’s not dead.  Anyone who says it is, I’ll just throw them over to you.  I read in your bio that your dad was a preacher and a bluegrass musician.  That’s interesting.

Andrew Beam:  Yes, I was playing guitar when I was 11 and my dad taught me how to play basic chords.  He’s still a big bluegrass guy.  It didn’t take me long as an 11 or 12-year old to know I didn’t want to play bluegrass.  So, I started going into classic rock and a bunch of different influences, and obviously my accent holds its place in country music.  I listened to a little bit of everything, but I started songwriting toward the end of high school and then started playing live in college at clubs, and kind of realized country is obviously my niche, but never thought I’d be doing it full time.  I went into law enforcement, with the intention of making that a career, and all of a sudden everybody that saw my shows were like, “Man, you gotta do this for a living.”  Eventually, I heard enough people say that and here we are.  I’m just trying to bring real country back.

Patti McClintic:  Yeah, it’s starting to be a little bit of a trend, I think.  There are a few of you that are trickling in a little bit, whether or not you can break down the radio barrier, that’s a different story, but there have been some interesting changes going on, so you just never know.

Andrew Beam:  I think the pendulum is always swinging and there’s nothing new that’s going on that has not happened in the past.  Kudos to Luke Combs, he caught it right when it stopped, and everybody jumped on all his music.  It’s great music, but there are a lot of guys that have been around for ten years or more that people are now just starting to discover.  I’m not concerned with radio play, as long as I’m getting music to our fans.  I’m ready for things to open back up, and for things to rock and roll, but we have a ton of stuff going on off the stage.  We just dropped a first single and we have another single coming out in March.  Then the album is coming out in April.

Patti McClintic:   I listened to “You Should See the Other Guy,” is that the most recent single?

Patti McClintic:  That’s a cool song.  What’s coming up next?

Andrew Beam:  What’s coming up next is actually the title track of the album, and it’s called, “Selma By Sundown,” and that’s Selma, North Carolina.  My producer, Joe Taylor wrote that song.  We’ve been working together since the fall of 2017.  Once he heard my voice, he said, “I’ve got a song I want you to hear.”  As soon as I heard it, I said, “I want to cut it, no questions asked.”  It’s honestly solid country gold and I can’t wait for y’all to hear it.

Patti McClintic:  Okay, and that’s comes out in March?

Andrew Beam:  Yes, that’ll be out in March.

Patti McClintic:   Alright, great.   Have you been doing any live streams?  Anything just to keep your face out there?  Or have you got such a loyal following that it doesn’t matter?

Andrew Beam:  That’s kind of what’s kept us afloat.  I did a few livestreams back when things first hit, and to me, about halfway through the first song, I was just over it.

Andrew Beam:   I learned real quick that was not how I wanted to get my music out there, and we’re very fortunate down here in the low country, that private shows have really kept us going through this whole thing.  I never thought it would be going on a year since the day the music died.  I reckon that was March 16th, I remember my phone blew up that day.  That’s really what we’ve been doing, we’ve been in the studio and showin’ up in backyards, and there’s still a couple shows happening, outdoor venues.  We actually have a big show on April 16th at the Windjammer for the album drop, and that’s in Charleston.

Patti McClintic:   Alright.  Well, that’s exciting.  At least you have stuff going on and hopefully by fall things will really be rolling again.  So, when you’re not doing music, what’s your thing?  What do you like to do?

Andrew Beam:   Pretty much outdoors.  Either I’m hunting or fishing.  Deer season is wrapped up, so is duck season.  The weather has been awful all the way across the country right now, so typically I’d be in a boat fishing right now, but turkey season is just around the corner.  So, if I’m not writing a song, in the studio or on the stage, I’m outdoors.

Patti McClintic:   That sounds like a common thread from a bunch of people that I’ve talked to in the last couple days.  Everybody’s an outdoorsman, except for some girls who were into makeup and things.  You’re not into that are you?

Andrew Beam:   I had a full beard a couple days ago.  I decided to shave the mustache.  You know, you gotta keep things lighthearted and fun during this time. 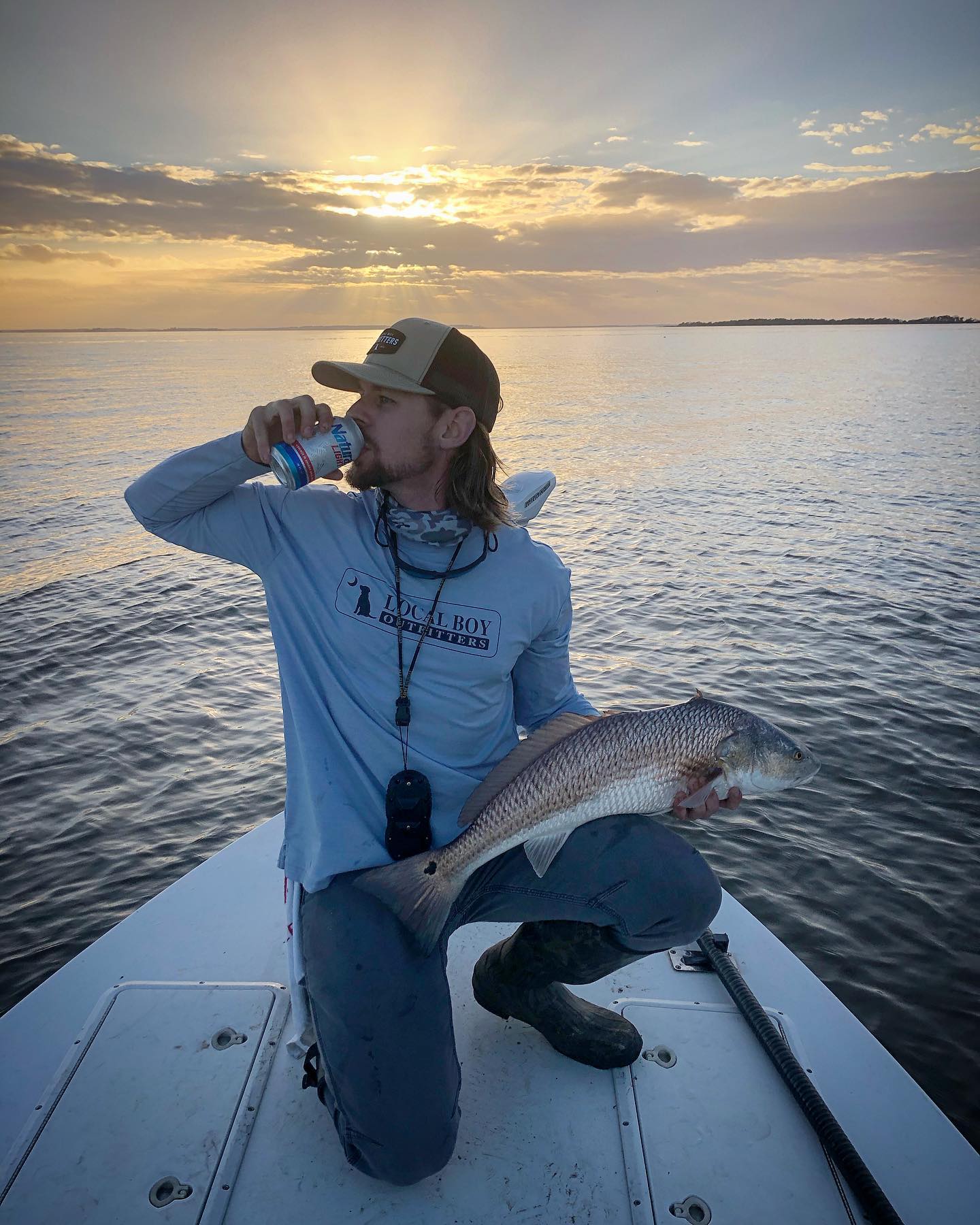 Patti McClintic:   You totally do.  So, if you could write with anybody, who would you like to write with?  Who’s someone that’s sort of a goal of a co-write for you?

Andrew Beam:  I’d like to write with Ray Fulcher to be honest with you.

Patti McClintic:  He just got signed.

Andrew Beam:    Did you see that?  That’s really cool!

Andrew Beam:   In the grand scheme of things, we really haven’t been around a very long time, so when COVID hit, I’d been doing music full-time a year and 10 months.  Prior to getting hired on by the state, I actually was a park ranger on Clarks Hill Lake in Georgia.  Ray Fulcher’s from Georgia originally.

Andrew Beam:   I remember when I came to town there in Georgia, we went to the same gym, and a couple people knew I played guitar, but it wasn’t anything serious back then. So that guy moved to Nashville, and I was like, “Really, what’s his name?” Obviously, that was Ray Fulcher, and that would probably have been 2014, 2015.  Then obviously, his career went up like that, which is awesome.  With Luke Combs and Ray Fulcher, that’s a whole, tight-knit group of successful individuals.  So, when I moved to Charleston and started playing music, Ray’s sister lives in Charleston, so it was kind of one of those, “I know the person that knows the person.”  I think it would be a goal to write with Ray.  We didn’t know each other, but we kind of come from the same background, if that makes sense? 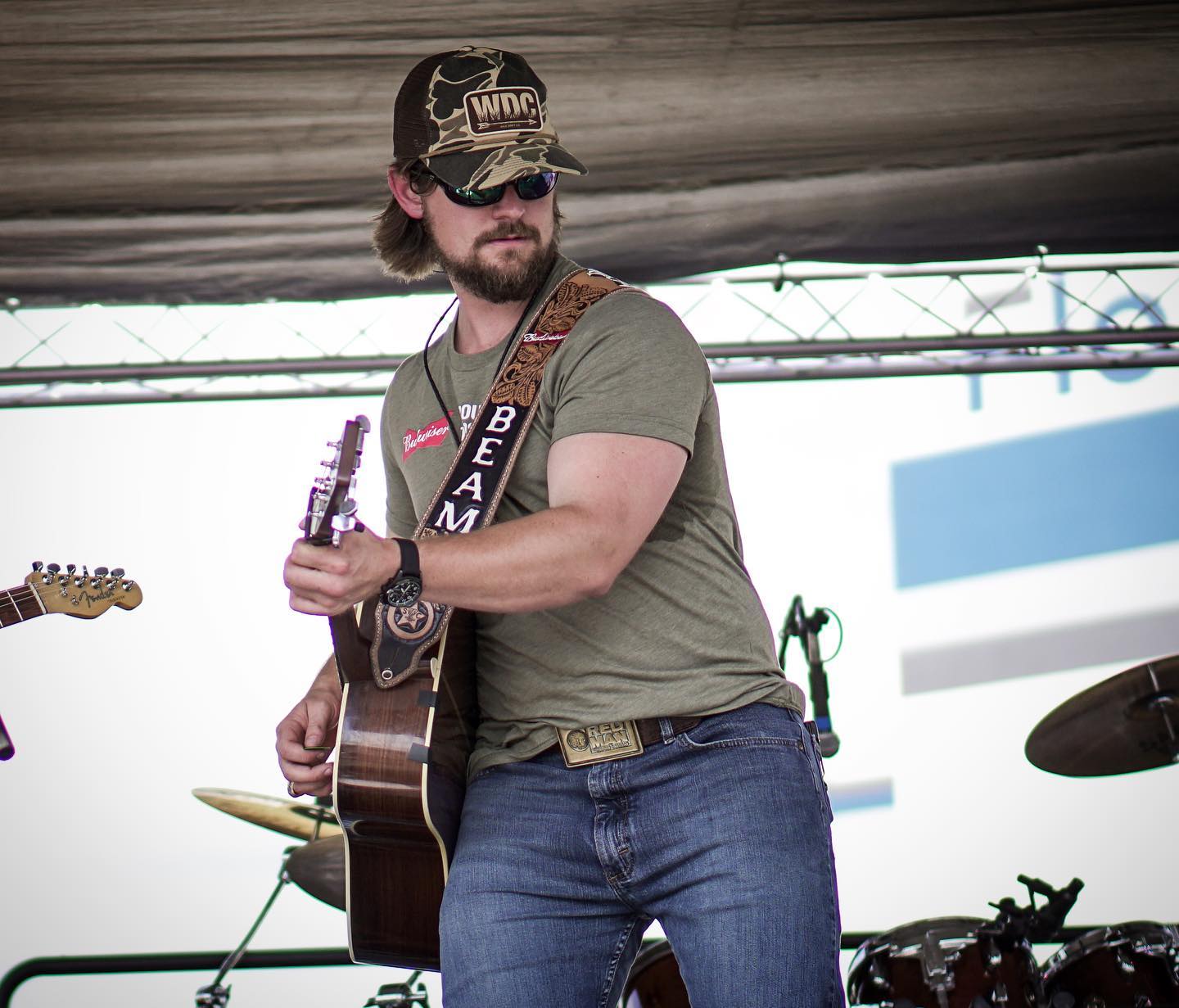 Patti McClintic:   Yep, it does make sense.  So, I’ve got this little box called a Chat Pack, and it has random questions in it.  I’m going to pull one of these cards out and ask you one.

(We were having some technical issues with our Zoom call freezing)

Andrew Beam:   I think the storms are affecting stuff.

(We were experiencing very unseasonable winter weather in Nashville)

Patti McClintic:   So, we’re almost done. I have this random question I pulled out of this box and it says, “Everyone hears discussions they consider boring.  Which topic can you put you to sleep more than any other?”

Andrew Beam:   Ha!  Right now, anything about COVID, I’m sure.

Patti McClintic:  You and me both.  I am so done and over COVID.

Andrew Beam:   I was over it March 17th, the day after everything happened.

Patti McClintic: Yeah, me too.  I was over it before it started.

Patti McClintic:   I was over it and I am over it.  I’ve had five COVID tests because I had to keep getting them to go visit my mom.  My mom is in New York.  New York has a COVID test requirement if you travel there.  As soon as you get off the plane, the National Guard greets you with a clipboard that you have to fill out.  There’s a part about the required COVID test.  So, I keep getting these tests and they keep coming back negative, so, yes, I’m really over it too.

Andrew Beam:  Our bass player lives in New York City and he was locked down for a long time.  He was really wanting to get things back trucking again, but ready for the “pause” button to get hit again.

Patti McClintic:   I hear you Andrew.  Well, thank you for spending time with us today at Think Country, and hopefully, we’ll see you someplace live and in person, not in the next decade, but hopefully in the next several months.

Andrew Beam: Just say the word and I’ll be in Nashville.

Patti McClintic:  Alright, awesome. Thank you so much.  Bye.

Andrew Beam:  Thank you so much.

Again, if you’re into honest-to-goodness country that can’t be described any other way, Andrew Beam is an artist you really need to hear.  I described him to a friend as being as country as the dirt in Johnny Cash’s grave.  He’s that country.  You can find him in all the places listed below.  Make sure you tell him Think Country sent you! 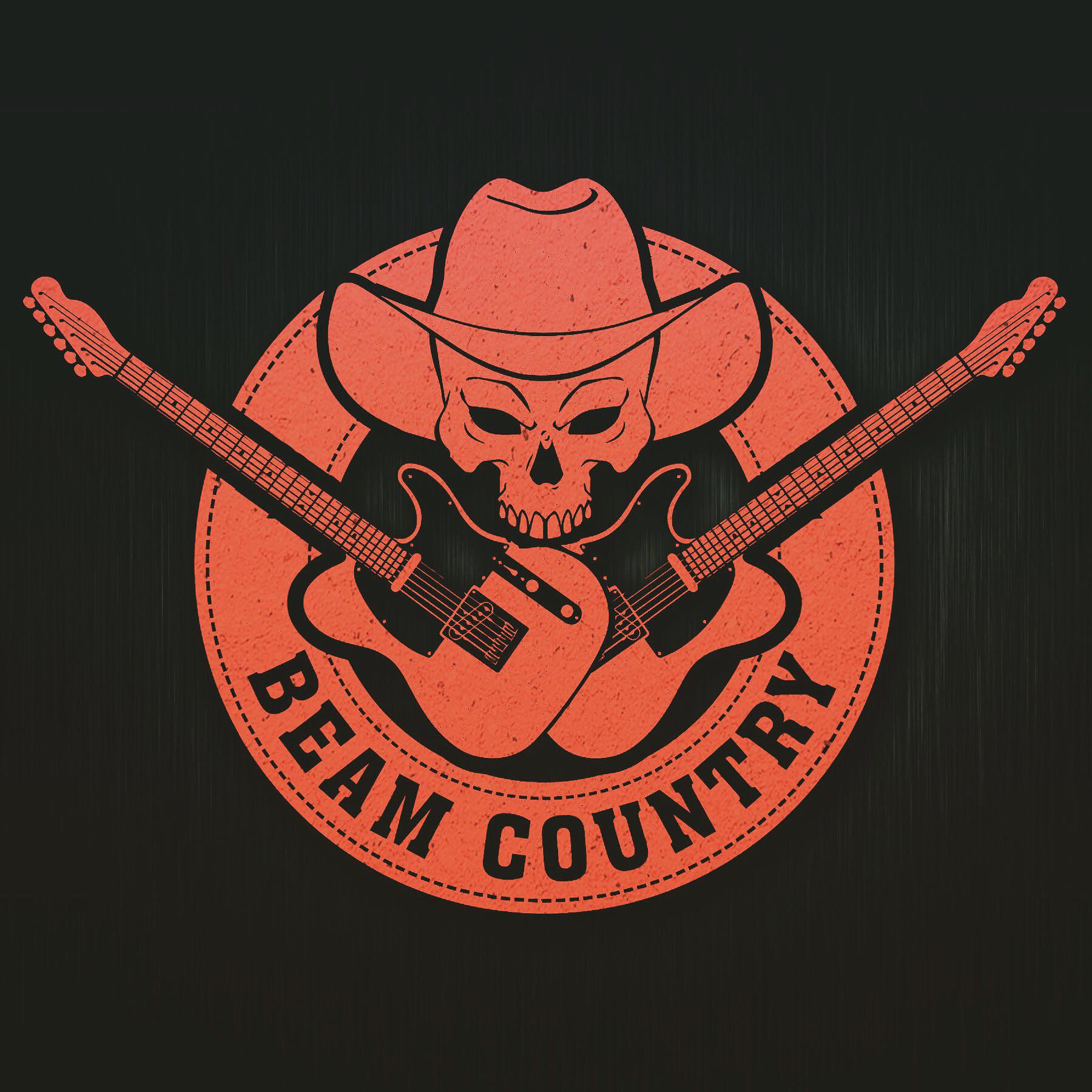 ANDREW BEAM CAN BE FOUND:

Bringing You Up To Date With Bailey James