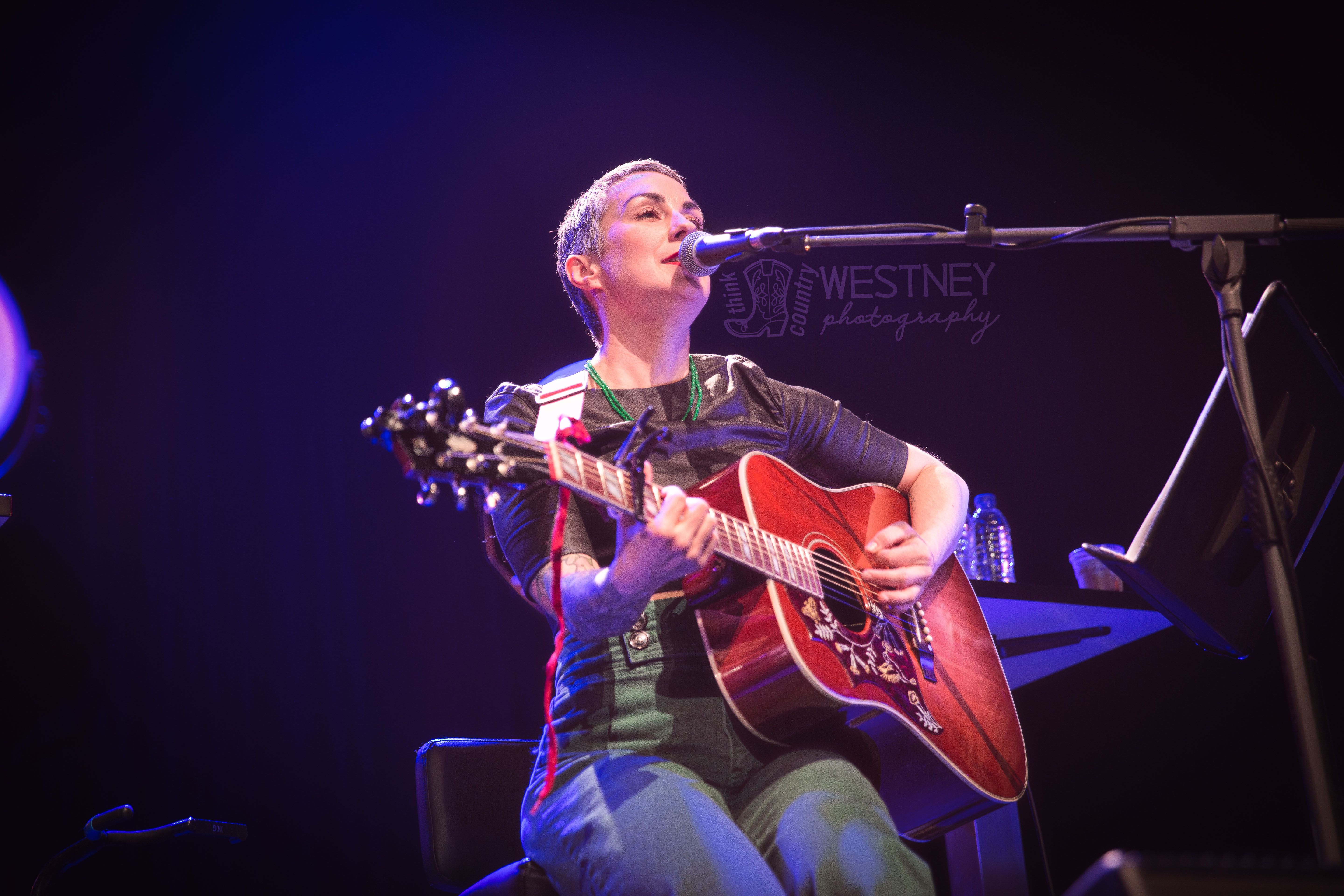 Prior to the CMA Songwriters Series show on Thursday March 7th taking place in the Indigo at the O2, Jamie and Amy were able to spend some time with Laura Veltz on her second trip to London but first ever time performing over here.  For many people that may not immediately recognise her name, in addition to writing Dan & Shay’s massive #1 “Speechless” you are probably a lot more familiar with a lady she is a frequent co-writer with.  As we spoke to Laura on the Thursday night it was very fitting to be the night before the world got to first experience the sophomore album “Girl” by Maren Morris:

She is the best!  I don’t even know how to talk about it, I have 5 songs on this record so I’m out of my mind excited particularly with this batch of songs and I couldn’t be prouder about it.  It’s an honour!  I’m so happy that I connect with her and she connects with me.  It’s one of those luck things as you don’t know who you are going to connect with like that.  We had been writing before either of us had much going on so it’s pretty exciting!

In addition to collaborating with Maren for creating 5 tracks from Girl she also worked with her on Sugar, Rich, Space and Maren’s first number 1 single I Could Use A Love Song from her debut album Hero.  We talked about when you write a song like that whether you have a feeling it is going to be so big like that.

I think it’s a really funny story.  I got pulled over that morning and we were all having a little bad luck so we went looking for a drink at 11am!

For anyone that has been to Nashville before you may have encountered the place you go for a morning drink, so Laura along with Maren and Jimmy Robbins naturally ended up in Losers Bar & Grill!

I don’t think we were planning on writing and Jimmy asked Maren if there was anything missing from the record and she said I Could Use A Love Song and the title just fell out there.  We were all just about tipsy enough to write melodies that are virtually unachievable.  It’s an incredibly rangy song and very difficult to sing but Maren, you know being Maren it was just easy but we were uninhibited because of a little bit of drink!

We talked with Laura about what makes her so special as an artist and someone to work with where she emphasised how Maren is a songwriter and could easily make an entire record by herself but also about what she has done for women in music.

When someone already knows how to explain how they feel, then you can just go in and be so how do you feel about this?  Then you are collaborating but it’s her willingness to express things that just say FUCK YOU and to me I’m like Yay to that!  I like the idea of her, she pushes the envelope and she’s changing the rules.  She is putting women on a level that has kinda never really been done before!  The edgiest thing when I moved to Nashville was like Before He Cheats which is an amazing song, but if you think about the position it puts the woman in, it’s a power position which is awesome.  But also like What the Fuck?  That was like a dimension of what women were and that subject was well covered then thinking about where it’s gone because of Maren and people like Maren talking about being sexy, being sexual and not being afraid to position herself as the power in a relationship!

One other person Laura has enjoyed success writing with is our very own Brit, Jon Green who Laura was writing with the day after we spoke.  Many people will be familiar knowing him as The Bonfires and particularly with his work with Laura’s neighbour and the shining light from the UK in Nashville Lucie Silvas.

I remember the first time I met and wrote with him.  He was singing and it was like butter meting in my ears!  I was talking to him and texting my publisher going get me every possible write with this guy.  I couldn’t believe how good he is, we have had some really cool luck together with cuts that are some of my favourite songs.  Kane Brown cut a song called Live Forever, that’s one of my absolute favourites!

This being a second venture across the pond, with her previous trip as a tourist being a little different.  She did get to fall in love with Topshop before it had arrived in the States and (like most Americans seem to relay to us) eat a lot of Indian food – which she says the hotter the better saying “vindaloo all the way”  but arrived in the middle of a terrorist scare at Heathrow airport but she said “It was definitely like a trauma, I’m so happy to be back so I can delete all of that and those strange moments.”

The reputation we have as an audience in the United Kingdom as something this is incredible to hear artists talk about:

Being in Nashville people value songwriting and they will be quiet and they listen but over here I do feel a mounting level of loving pressure, not ugly but pretty and sweet how we hear everyone is so excited and will be attentive.

It’s funny how similar setting in a gym is similar to songwriting.  If you think about what they have to do, they have to make a route compatible to everyone.  Whether you are tall or short, athletic or not!  They have to write for the people just like commercial songwriting, it’s the same thing!  My husband is the programme director at several gyms and we are always talking about how similar climbing and writing are!

Then on a final note about how much fans are realising and valuing the impact of the songwriter:

People didn’t know that other people wrote the songs at all!  They thought Elvis wrote all of those songs so now there is this increasing appreciation for where the art is coming from and there are craftsmen who make these emotions simple and easy to understand which is crazy to be counted amongst them.  It makes me really proud!

This really was one of the most fascinating interviews we have had to opportunity to do here in London where both me and Amy were totally in awe of the passion this lady has for the craft of songwriting!  Everyone who went to the songwriters show could not stop talking about how well she connected with the crowd then delivered her stories and songs so beautifully.  We really hope that Laura can make the trip back and see the country music fans on this side of the pond again but in the meantime keep up to date with her on Instagram and anyone in Nashville be sure to take any opportunity you can to see this lady play. 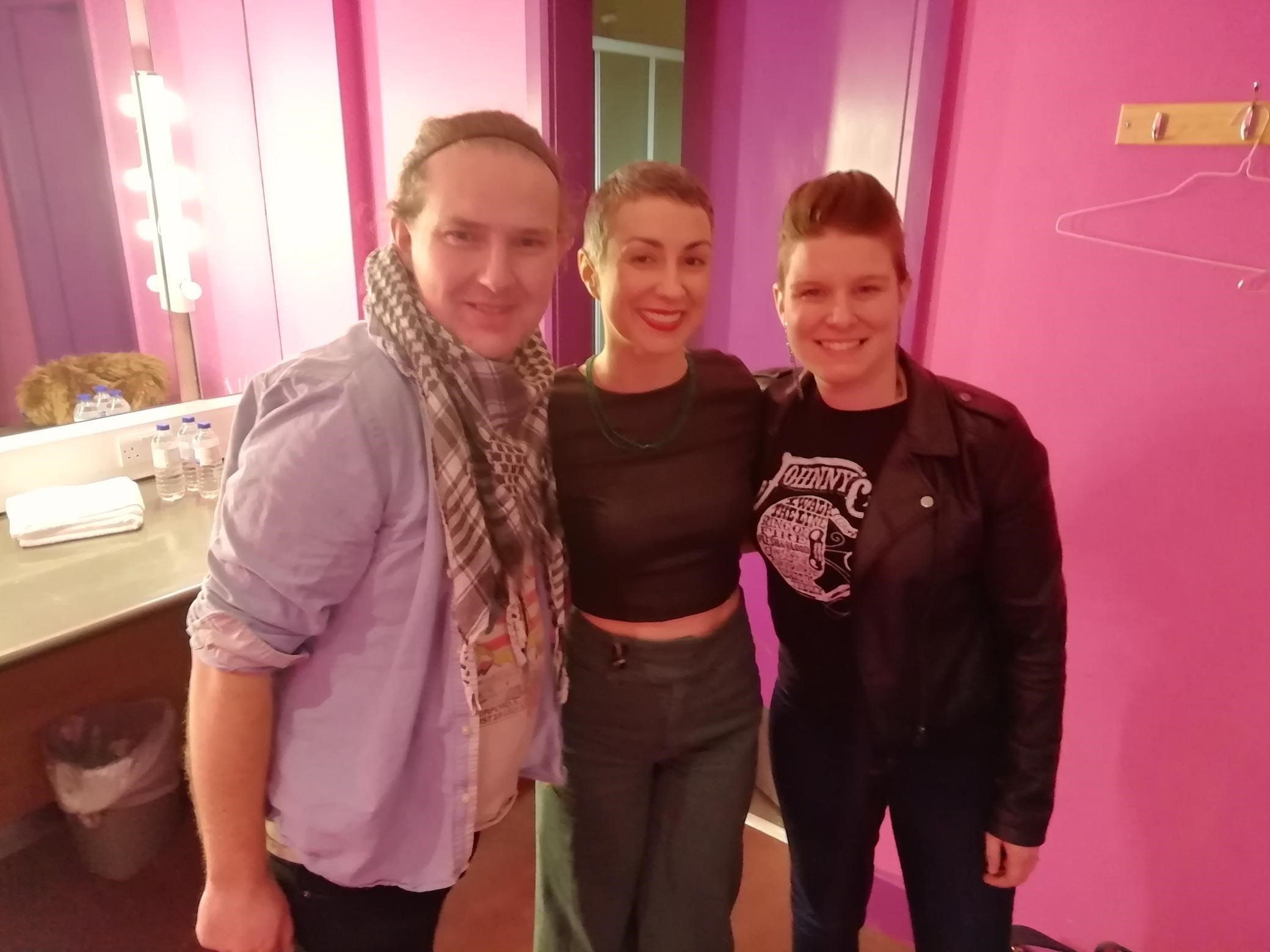 Following a decade of touring and recording with her family band, Cecilia and culminating in a record deal with Atlantic Records, the New York City native zeroed in on her love of commercial songwriting in 2008 when she was encouraged to move to Music City by Nashville Songwriter’s Hall of Fame inductees Kye Fleming and Mark D. Sanders.

Since then, Laura has garnered major hits and cuts by Country music’s hottest superstars, becoming one of today’s most respected tunesmiths. She has earned four No. 1 songs to date, including RIAA PLATINUM-certified “Speechless,” co-written and performed by Dan + Shay, “I Could Use A Love Song” co-written and performed by Maren Morris, “Drunk Last Night” (Eli Young Band) as well as GOLD-certified “Lonely Eyes” (Chris Young).

Laura had four cuts on Morris’ GRAMMY®-nominated debut album HERO, including “Rich,” which she was awarded the 2017 AIMP Publisher’s Pick Award for co-penning in addition to the 2018 NSAI 10 Songs I Wish I’d Written honor for “I Could Use A Love Song.” Morris’ follow-up album GIRL, out March 8, features five cuts co-written with Laura’s including “The Bones.”

A frequent collaborator with Ryan Hurd, Laura co-wrote his new single “To A T,” which recently impacted Country radio as well as his 2018 No. 1 on SiriusXM The Highway, “Diamonds or Twine.”