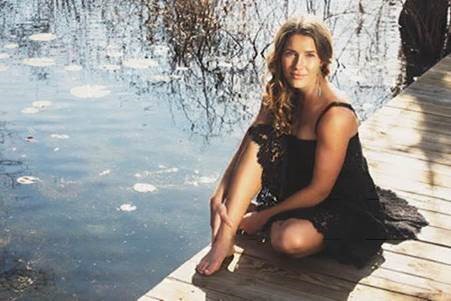 Heading across the pond to play her first shows in Europe as part of Country 2 Country 2019 in Dublin, Glasgow and London is only the start of another really busy year for Caroline Jones as she is set to head out on tour in the United States with Kenny Chesney and Zac Brown Band through 2019.

Caroline had been across to London as a child where she described vividly remembering the beauty of the city and in particular visiting the gardens as “I love nature and I loved the history as it’s really interesting to me.  There is a sense of elegance about here that is really unique and special.”  As a performer she genuinely was really excited about being in Europe playing shows and said it was an honour to be a part of the festival and playing in the UK.

“It has a great reputation in the US for audiences being really appreciative of artists, of the lyrics, storytelling, authenticity and musicianship.”

On the Sunday afternoon of the festival we got to spend some time with Caroline who in the past had spent a long time building up her craft touring schools and universities across the States before some big changes two years ago when she began touring more in the commercial sense.  She began to work with Jimmy Buffett and Zac Brown “they have taken me under their wing and given me their stamp of approval, they have trusted me to go out in front of their fans in big venues!”  This was obviously an incredible opportunity that has also brought about playing shows on the same bill as the Eagles, Vince Gill, Kip Moore then also with Tim McGraw and Faith Hill.  Then 2019 holds more dates with Zac Brown Band and opening for Kenny Chesney which is particularly exciting especially for an independent artist.  She described how the experience and learning from them by playing all these shows “I really wanna build my craft as a live performer and a musician.”

In addition to touring with what may read like the who’s who of artists in the country world I was really excited to talk to her about Ryan Tedder and the shows she had played along with OneRepublic when I realised we were both really big fans of their music particularly “Heaven” off their Oh My My record.

“I actually got to write with him and Zac last fall for Zac’s record and that was really exciting because I had met him on tour but didn’t really get to spend any time together.  Being in a room with him was a big one for me because I really look up to him as a producer, a songwriter and an artist.  It’s so interesting because he is such a pro songwriter, like he can write anything in any genre but then going to the OneRepublic stuff it’s like super well refined and crafted with that blend of roots, gospel, rock and even Brit pop.  It’s very well thought out and I’m a big fan of their band!”

The great thing about hearing this is that Caroline made her independent record where she was writing the songs, playing the instruments, recording the tracks and then co-produced the record Bare Feet alongside Ric Wake where following on from this she brings those songs to life by playing them live which is one of the reasons that Ryan is seen is such an incredibly talented guy that everyone wants to work with as he sets the bar to be complete and excel in each and every craft so it is incredible to hear someone else wanting to be able to complete the whole process them self:

“There is something very complete about it and for me there’s so much opportunity for being creative in all of those different crafts, so that’s what really gets me going and turns me on.  The idea of production, how you layer the instruments, meld them together with a melody and a lyric where there is all these elements that you can bring and put your whole heart and sole into it if you are passionate about it.  What really drives and excites me is the chase of all the different crafts to come together for like the perfect record and the perfect song then when when you perform it live is a full circle moment.  I feel that as an artist who loves all of the crafts and wants to be engaged in them all is a real gift.  I have also been able to find collaborators and people on my team who really add to my vision who know how to implement it which is really fun as well.”

A great example of someone that has been a big part of this is Mac McAnally who she met through Jimmy Buffett’s manager Mike Ramos and talked about making her record with him and how he “took me under his wing and introduced me to the Nashville session world.”  On the subject of making music right now particularly with being independent she made a fantastic point about the industry at present along with the drive for creativity and authenticity with making music that is right for you and being heavily involved in her own business aspect:

“Artist’s have that option to not have somebody in a suit sat above them to tell them yes or no.  The ‘business’ should be just an extension of the music especially with how right now with globalisation and the digital era brings so many ways to connect with fans.”

Her debut record “Bare Feet” was released in March 2018 and the song that particularly stood out for me particularly is her current single “The Difference (Goshdamn)” which just sums up being creative and not being pushed into a specific direction with the intention of just getting a great song.  I love the blend of traditionally different musical worlds whilst still being so authentic in lyrics and melody.  At the base the song is “about real love and real trust with what that means in 2019.  It’s about how you develop that with someone, keeping an open mind and the kind of man that I would want.”  She wrote the song on the banjo and has a lot of mandolin, acoustic guitar, electric guitar and live drums but has a really strong EDM influence which she described as an “interesting and challenging blend of worlds.”  There was a fantastic video released a few weeks ago and has already had well over a million views on YouTube which you could tell she was really really happy with as “it was such a blast to make that video and I can’t stop smiling when I watch it.”

With regard to the EDM and country infusion which I am a really big fan of as like Caroline I am a consumer of all different types of music she said her process was different to how the late Avicii brought the infusion a few years back where there were no live drums and was started from a computerised production base with the instruments being put in on top.  “For me I took a live base and brought the computerised effects on top so it was a real challenge but good fun.”  We talked further about not being refined to being boxed into a set genre

“It’s about trusting your instincts, I am in my twenties and consume all different types of music.  Yeah it’s crazy to wanna fuse all those things.  Why would I want to if wasn’t worth a shot?  It’s a fun place to start creatively and it’s like what if we did this? how would we do that?  Then go down the rabbit hole and come out eventually!”

Firstly as I mentioned earlier she has a really busy year with Zac Brown Band and Kenny Chesney tours in the US (dates listed below) but she was adamant to say “I will be back!  I would love to build a fan base over here!” which is something definitely worth being excited about and looking at those tour dates I notice she is not too busy in early June so fingers crossed she may be in Nashville when we are over for CMA Fest.  In the meantime be sure to check her out on her website Facebook Twitter Instagram YouTube 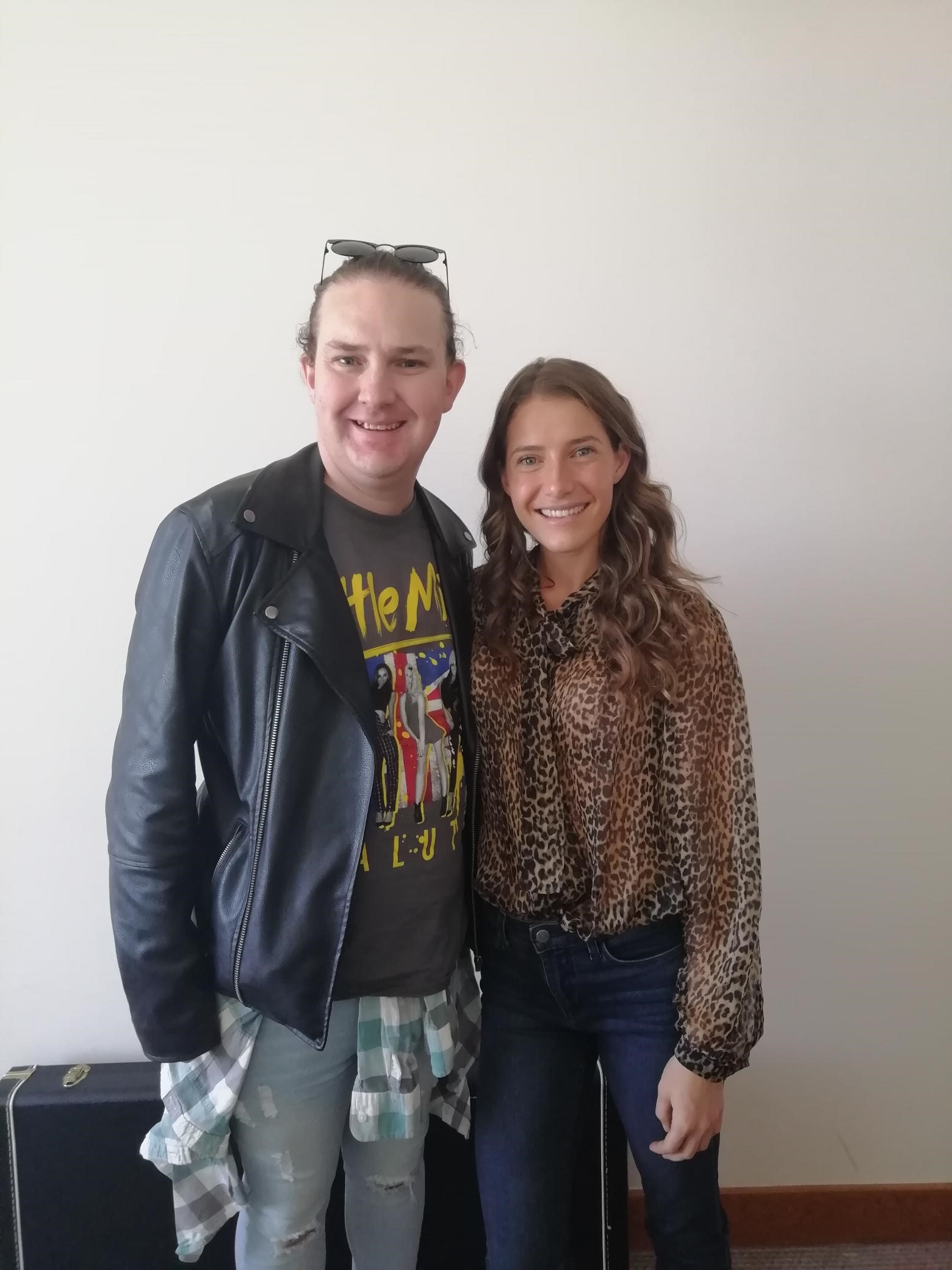 FULL BIO:
Singer-songwriter and multi-instrumentalist Caroline Jones co-produced her album, Bare Feet (March 30/ Mailboat Records), with Grammy and Academy Award-winning producer Ric Wake (Mariah Carey, Celine Dion, Whitney Houston, Trisha Yearwood). Upon release, Bare Feet rose to #23 on the Billboard Country Albums Chart and #12 on iTunes Country Albums Chart. The album features “Tough Guys,” which spent five weeks at #1 on CMT.com’s 12 Pack Countdown. Rolling Stone named her one of the “10 Country Artists You Need to Know” as “an ambitious, entrepreneurial guitar heroine primed to bring back the pop-country glory of the Nineties” and Billboard called her one of the “15 Country Artists to Watch in 2018”. Throughout 2018, Caroline is touring with Jimmy Buffett and the Eagles, Zac Brown Band and OneRepublic, and Tim McGraw & Faith Hill. In 2017, she was on the road with Zac Brown Band and shared the stage with Jimmy Buffett, Kenny Chesney, and Toby Keith at the Trying to Reason hurricane relief benefit concert. A live duet with Buffett led to a charity single release and ultimately, a partnership with his Mailboat Records. Caroline previously toured schools & universities nationwide – including underserved and charter schools with Stedman Graham – on The Heart is Smart School Tour. Caroline is the host of Art & Soul on Sirius XM.