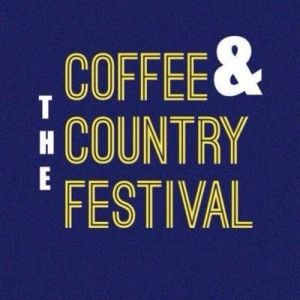 The first Coffee and Country Festival took place on April 28 in Fulham, with both The Lekkerbek and Labi Deli hosting a great line-up of upcoming UK based country artists.

Elliott Joseph was the first artist i got to see. Before he started, he asked everyone in the room to take a step forward towards the stage. The audience had been gathered around the edge of the room before this, but politely obliged. For a small audience, there was a lot of enthusiasm and clapping along and it really set the atmosphere as he started with original songs ‘Nothing Quite Like Home followed by ‘We Got High’. 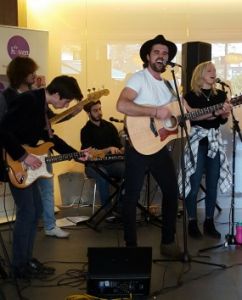 I wasn’t familiar with his music before the set, but was really impressed with his vocals and his more traditional country sound. Third song ‘Arizona’ was my favourite, and i loved the way Elliott’s acoustic guitar blended alongside his band member’s electric guitar. He finished with a slower original song ‘No Moving On’ followed by a cover of Merle Haggard’s ‘Silver Wings’. I never tire of hearing this song, but given his recent passing, there have been lots of covers. This was one of the great ones and a perfect way to finish the set.

Fifth Floor were formed back in 2014 when singer-songwriter’s Moa and Matilda met at university in London, both having relocated from Sweden. They started their set with original songs ‘You’re Not In The Picture Anymore’ followed by ‘Drink It Away’ and ‘Heartbreak Talks’. I love their originality and it’s rare to find 2 strong singers who harmonise so well together without one overshadowing the other. With influences from both country and pop-punk, their songs are both catchy and relatable.

I’ve seen Fifth Floor perform a few times after a chance meeting on the way home from a music video shoot. When they announce mid-set that they are about to do a cover song, i’m usually the only one that knows it. This time they chose Little Big Town’s ‘Quit Breaking Up With Me’, a band i’m not really a fan of (sorry!), and so didn’t know this one. But this was a country audience, and given the collection of impressive nods and tapping feet around the room, i might have to give Little Big Town another listen!

My favourite song of the set was ‘Before The Last Song Plays’, which they wrote after attending C2C Festival and seeing people leaving before the artists had finished. They don’t have any music available at the moment as they have been working really hard over the past few months on their debut EP. It is set to be released next month so keep an eye out for information on their EP launch. In the meantime, there are some great covers on YouTube for you to enjoy!

I loved Southern Junction’s set at C2C Festival so was excited to get to see them perform again. Duo Carlos Heath and Katie Jayne started their set with two covers – Carrie Underwood’s ‘Before He Cheats’ and Lady Antebellum’s ‘Need You Now’. I loved the way they slowed down the opening song in a way that showed their originality but grabbed the audience’s attention at the same time. The latter song was just as powerful as the original, and was the perfect choice for a band citing Lady Antebellum as one of their influences. 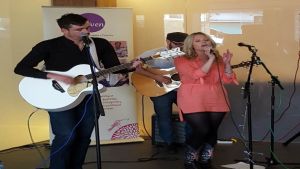 Of course my mind went completely blank when Katie-Jayne asked me about my favourite song ‘Crazy’ as she introduced it. I think i redeemed myself by singing along to every word. ‘Inescapable’ showcases Katie Jayne’s songwriting skills and there were times when Carlos’ voice was so powerful that there was no need for a microphone in the small space of the Lekkerbek.
Southern Junction are set to release their debut EP ‘Running Out Of Time’ soon and played the title track from this before finishing up with their first ever co-write ‘I Want To’ and a fantastic cover of The Shires’ song ‘Statelines’. They are spending this weekend recording and i can’t wait to hear the finished EP.

Southern Companion‘s Darren Hodson closed out the night with a phenomenal set, starting with ‘The Leaving Kind’ from the band’s latest album 1000 Days of Rain. He followed this up with ‘Feels Like Years’, a song about the first date night with his wife after their baby was born. He had joked that he writes a lot of miserable songs – and that was how to distiguish him from Southern Junction when they play on the same bill. But the latter song had an feel-good upbeat vibe.

It’s a big challenge to stand on a stage and do justice to covers of Chris Stapleton’s ‘Whiskey and You’ and Jason Isbell’s ‘Cover Me Up’, but Darren did just that. He had the entire room so enthralled that the audience didn’t make a sound. My favourite song of the set was ‘Wrong Side of The 70’s’, with the introduction of the song setting up the story of being at an awkward age in the music industry where there are so many younger talented singers. It felt very genuine and humbling in the midst of such an incredible set. The bluesy guitar melody complimented his stunning vocals perfectly. I’m not sure why i’ve never managed to catch Darren or the full Southern Companion band before, but I look forward to seeing more live shows.

A fun afternoon of free music, but i would have happily paid to see the amazing talent they had lined up. I hope Coffee and Country Festival bring us more events in the future.