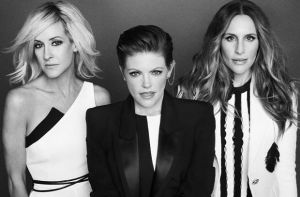 Having been a huge fan of the Dixie Chicks for coming on ten years, I was extremely excited to attend two of the shows on their UK tour, after being extremely impressed with their C2C Festival set in 2014. The first of my two shows was at the Manchester Arena, and although I was going on my own, I couldn’t have been happier just to see the Chicks close up and sing along to their body of hits. I was not disappointed.

In total, the trio played for over two hours, and during that time they performed a bevy of big hits, album tracks, and a smattering of covers that pleased everyone in attendance. Although most of the top level was blocked off, the seats that were open were packed full of fans ready to have a good time, and the Chicks really brought the energy, especially with the first portion of their set. With a total of eight band members on stage, they rocked out to a number of offerings from their fourth album ‘Taking The Long Way’, including the opening number (from which the album takes its name) ‘The Long Way Around’, ‘Silent House’, ‘Easy Silence’, ‘Favorite Year’, ‘Lubbock Or Leave It’ and ‘I Like It’. They were also sure to include a couple from their third album ‘Home’, namely the huge singalong ‘Long Time Gone’, ‘Truth No. 2’, and an awe-inspiring performance of ‘Top of The World’.

It was time for a change, however, and the entire band left the stage while a five-minute video clip entertained the audience. Incorporating some impressive CGI, it showed the Chicks involved in a race against each other, often chucking bottles of water to throw off their competitors. As the rocking soundtrack came to a close (and the crew were done adapting the stage set-up), Emily was seen to win the race and the Chicks returned to the stage, with Natalie quipping, “Just so you know, when we did that race for real, Emily did not win.” They then launched into an acoustic-driven set, starting with ‘Travelin’ Soldier’, and ‘White Trash Wedding’, which both got huge reactions. It was during this portion that they debuted their cover of Beyonce’s ‘Daddy’s Lessons’, which Natalie admitted they had just put together that day. She also revealed that someone would be holding up cards of the lyrics in front of her so that she didn’t forget them, but she cracked up as she then missed her cue when they started the song. After the impressive rendition came to a close she made fun of herself messing up the melody, although I honestly hadn’t noticed, so she clearly recovered it well.

The acoustic portion also allowed another cover, of Patty Griffin’s ‘Don’t Let Me Die In Florida’ from her 2013 album ‘American Kid’. Natalie joked about how Patty didn’t know that she was writing all her songs for the Chicks, but she was. And an incredible version of Prince’s ‘Nothing Compares 2 U’ in tribute to the legend rounded out the covers that night, complete with purple lighting and his famous symbol imprinted onto the video screen behind them. The video screens deserve special mention because they included so much attention to detail, probably more than I have ever seen from any artist. From amazing artistic pieces (‘Silent House’) to lyric videos (‘Easy Silence’), and from cartoonish political references (‘Ready To Run’) to clever usage of classic Hollywood footage (‘Goodbye Earl’), each one was different and interesting. Some of my favourites included references to Chris Brown beating Rihanna and a moustache drawn on Donald Trump in ‘Goodbye Earl’, and poking fun at the 2016 US election in ‘Ready To Run’, before red, white and blue confetti burst out into the crowd.

Following the acoustic portion of the show, the trio moved to the side of the stage to perform a bluegrass medley of this from other artists. With Emily on banjo, Martie on fiddle and Natalie hitting a bass drum, some of the songs they incorporated included The White Stripes’ ‘Seven Nation Army’, Beyonce’s ‘Single Ladies’, and The Weeknd’s ‘Can’t Feel My Face’. During this performance, the crew worked at re-purposing the stage once more, so that the Chicks could get the full band back together for a run through of some of their biggest hits. These included ‘Landslide’, ‘Cowboy Take Me Away’, ‘Wide Open Spaces’, and the main show closer ‘Sin Wagon’, which prompted half the arena to get up and start dancing. After a brief moment off stage during which the crowd roared for their return, the Chicks came back for a two-song encore. This included their huge comeback hit ‘Not Ready To Make Nice’ and a cover of Ben Harper’s ‘Better Way’.

Although I would have loved to hear more of their early material, particularly ‘There’s Your Trouble’, ‘Cold Day In July’ and others, it was hard to fault the Chicks for this tour. It was a huge show with so much going on, and yet they still managed to leave room for the roots and intimacy that made them so loved. They were incredibly slick and polished, yet with the personality that everyone loves, and it was a reminder of why they got to the top in the first place. They hinted at the end of the show that they hoped to be back soon, indicating that this comeback tour may lead to a new album and subsequent supporting tours around the world. Let’s hope so. They were brilliant.

Country In the South