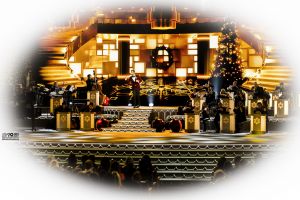 It won’t air until November  27th  In the US and December (not date yet) in the UK but taped this week.  The annual CMA Country Christmas special from the Grand Ole Opry House in Nashville, which will air on ABC at 8:00 PM Eastern Time and again on Christmas Day is going to be spectacular! and on Sky Arts in the UK (date and time to be confirmed) I know, because I was one of the lucky ones who sat through the taping.

As with any television show taping, it wasn’t without a few bumps.  A few retakes here and there, but for the most part, this one went fairly smooth.  The mood was festive and the scenery was simply breathtaking.  Country fans and Christmas fans in general are in for one very special early gift this year.

Storme Warren, Sirius/XM disc jockey on The Highway, played host in between the actual show taping and kept the audience amused with things such as jokes read from Twitter, while country superstar, Reba McEntire, for the first time ever, served as hostess of the show itself.  Coming out first in a stunning green dress, she never took herself too seriously.  She proved herself to be everything the show needed.  Informative, funny, talented, easy on the eyes and instantly recognizable as country. 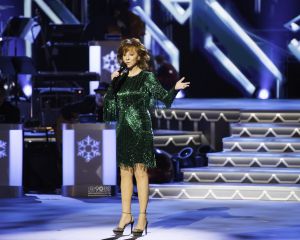 The  backdrops changed with every song and they were beautiful.  They fit the number they were being sung against and rather than being distracting, they enhanced the songs and the fashions.  It was all so well coordinated.  I would describe the sets in detail, but I don’t want to give away the show.  You’ll see what I mean when you watch the show and you’ll love it.

The difference between the TV taping and a normal show at the Opry was the chaos.  There were cameras and media people all over.  There were stops and starts and cues as to when to applaud and when not to applaud.  It will all come off as one seamless event in the final production, but I assure you, that’s where TV magic comes in.  Things will be done in a different order from how we saw them done last night.  It will be fun to watch it pieced all together, but I must admit, it was fun to watch the bloopers, the retakes and the crazy just the same. 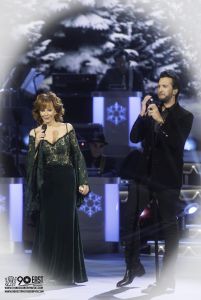 In an effort to not give away too much about the show, I’ve elected, at this point, to simply list the performers and what songs they sang, and whether they needed to do any retakes.  I won’t give my opinion on how they did, because honestly, they were all good.  I will say this much, I watch this show every year and I have to say, I think this year’s offering is going to be the best in recent memory.  I think the song choices were just better.

Dustin Lynch – “Santa Claus Is Coming to Town” (Did one retake)

Brett Eldredge – “It’s Beginning to Look a Lot Like Christmas”

Little Big Town – “What Are You Doing New Year’s Eve?”

Lady Antebellum – “This Christmas” (Did one retake)

Reba McEntire – Medley of “O Come All Ye Faithful”, “O Little Town of Bethlehem” and “I’ll Be Home for Christmas”

CeCe Winans (with choir) – “Joy to the World”

Alan Jackson – “Have Yourself a Merry Little Christmas”

I certainly hope all of our thinkcountrymusic.com family and friends tune in to this amazing production.  If there’s one thing we all need, it’s a little Christmas.  It’s a heartwarming celebration of happiness, music and love.  Nothing wrong with letting some of that inside your soul this holiday season.