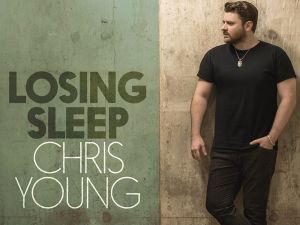 ‘Losing Sleep’ is the first single to drop from Chris Young’s upcoming studio album, co-written with Chris DeStefano & Josh Hoge.  The opening guitar is incredibly familiar and has an essence of both Justin Bieber’s ‘Love Yourself’ and Thomas Rhett’s ‘Die a Happy Man’ in its hook.  It’s a slow and sexy opener, ‘Light a candle, turn all the lights down low, Baby let’s just lose control, lose control, I can handle every single curve you know….’ Chris croons and cue ladies feeling weak at the knees at the sound of those smooth, overtly sexual vocals.  At this point I can close my eyes and lose myself in those dulcet tones; Chris could actually sing the instruction manual for my mum’s old Fiat Punto and it would still sound like the Kama Sutra.

The chorus kicks in with slick production, big percussion and Chris’ effortless vocals. ‘When it comes to us, every single touch, is something special, when we’re wrapped up in those sheets’.  Ok, that’s hitting the mark. The ‘Beiber’esque guitar is back and the verse is stripped back again before hitting the chorus and ultimately culminates in some great guitar solos before abruptly finishing.

So technically, this is a perfect vocal performance from Chris.  Sexy lyrics and a catchy tune result in a great country pop song that will sound at home on country radio.  I’m sure it will prove to be a concert crowd pleaser, the same way as ‘I’m Comin Over’ has.  It just didn’t have the wow factor that I was hoping it would deliver that tracks like Sober Saturday Night, Tomorrow, Getting’ You Home and Neon do.  However, Chris Young has, in my opinion, THE best male voice in modern country music by a country mile.  I just wished that instead of playing it safe and continuing down the ‘country-pop’ route, he’d break from the mould and revisit the more traditional sound of his earlier albums.  I believe if he did, he’d transcend from his current ‘middle of the road’ sound to Superstar status – where he rightfully belongs to be.