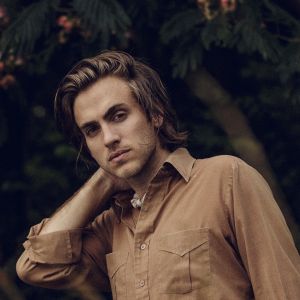 Having seen Andrew Combs play his acoustic set at The Melkweg in Amsterdam, the main stage at C2C and at The Verdict (jazz café) in Brighton I was looking forward to seeing him with his band. Andrew was joined by fellow American Paul Cauthen for his U.K. Dates, this gig being his last date.

Paul, from Austin Texas, signed to Lightning Rod Records. Originally part of Sons of Fathers, a Texas group garnering praise from Rolling Stone and producing two top 10 albums, Cauthen left the band in 2014 to pursue his solo career. Cauthen was introduced to music by his Grandfather, a songwriter  and gospel singer from Lubbock.  He strolled on to the stage in a black fedora with his guitar and sang us songs from his co written debut album My Gospel, recorded in Muscle Shoals, Alabama and some new songs.His voice reminded me both of Elvis and Jonny Cash at times, it was quite loud and probably didn’t need the microphone in this venue. The album reminds us that we are all fragile and to make the most of our lives and that in his own words ‘you don’t have to write about tan lines, flip flops and cold beer everyday.’ He seemed at ease and chatted between songs mentioning his difficulties with understanding our currency and liking the Guinness. I really enjoyed his set and look forward to seeing him headline or play at an Americana festival here. 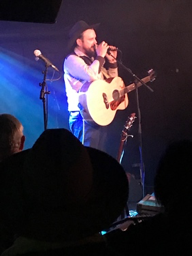 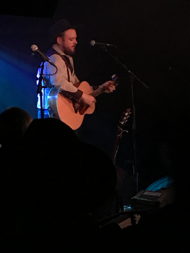 Andrew came on stage with his full band at 9pm dosed up with whiskey and cough mixture (his words). Last time I saw him was at The verdict jazz café in Brighton to a smaller audience a complete contrast to his appearance on the main stage at C2C. Now married and expecting a baby,  he appeared much more confident. His last album All These Dreams was a beautiful, soulful album where his mellifluous voice reminded me of Roy Orbison at times. His latest album released early April is called Canyons of My Mind on Loose Records in the U.K.  is a more lively offering but still with political ‘ Bourgeois King’ (We’ll build a wall to block the enemy/build a wall to keep us free) and environmental  messages, “Dirty Rain’ (What will all our little children say when the only place to play is in the dirty rain).

He started with Rose coloured blues, followed by ‘his tree hugging hippy song about the neglectfulness of our Planet’ Dirty rain. Then launched into the very popular title track of his previous album All these dreams. Better way followed which is about his wife Christin, Andrew  telling us how his very supportive wife stays at home and works to make the money he doesn’t earn.

His guitarist Jerry Bernhardt had a beautiful solo spot during Lauralee. The band then exited the stage and Andrew launched into the seventh song Month of bad habits from All these dreams, followed by his co-write with Brent Cobb; Rainy Day Song, it’s the title track on Brent’s album but called Shine on Rainy Day, the last song without the band was also from All these dreams and a request via twitter from Susan; Strange Bird. He told us that he’d been advised not to sing this song in the U.K. as it had such negative  connotations.  The band then reappeared to play Bloodhunters (‘about losing your goddamn mind’, Foolin’ (about facebook and social media)from All these dreams.

The twelfth song was Emily, not on either album but a crowd pleaser as we were asked to sing along to the chorus (a song he played at C2C).  Someone shouted out at one point and Andrew asked who the jackass was and that he could still remember his first beer as well!

One of my favorites is Swannee River which is about fishing and God. This track really showcases his beautiful melodious voice. The penultimate song was Borgeois King quite a brash song, more of a prog rock style about ‘his shithead president’.

The encore was Hazel Paul Cauthen came on stage and sung backing tracks with the band, the bass player gave us a great whistling solo as the show came to an end.

Both artists came out to the merch table for signing and photographs, this is always appreciated.

It was a great gig and always good to see artists being supported by a full band but I personally prefer the acoustic sound of his earlier album All these dreams. 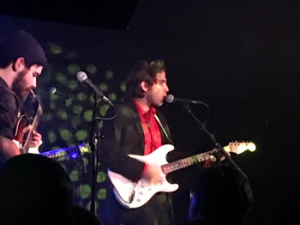 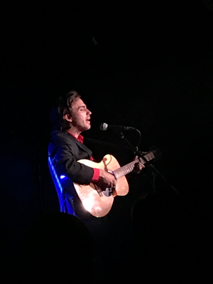 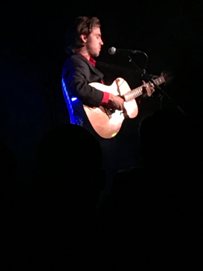 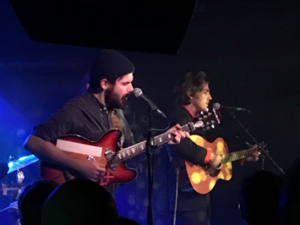 What Country Music Means To Me