Baylen Leonard came onto the Indigo stage to introduce Charlie.  He spoke about Radio 2 and the work that they were putting into this weekend (the Indigo was the Radio 2 stage all weekend).  He said the more we listen the more they would play.  He then pointed out that Country 2 Country is the biggest Country music festival in Europe.  Having been to every C2C since the beginning that made me feel really proud!  Baylen then said that we, the audience, make the stars and this next guy was back due to popular demand & that we were going to make him a star & on came Charlie. 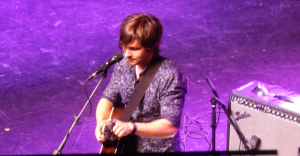 This was my 1st time of seeing Charlie properly, I had seen him at the Songwriters last year & enjoyed what I saw & heard.  I had wanted to see him again, but never got round to it at C2C last year and then the dates he played when he came back later in the year clashed with other gigs so I missed him again.  Charlie also played the Indigo the day before on Friday, but I was fafffing & only caught the end of his set, so I was determined to see him this time, it was worth the wait!

He started with Someone Like Me.  He had a chat with us & said anyone who had seen him before would remember that he had said that if Trump won the election he was going to move over to the UK, he said he had looked into it, but he couldn’t afford it & so was stuck & was staying put!  I think a lot of stars have regretted saying they would emigrate if Trump won the election!  He talked about how last time he was over here, one night he played in a cellar in Shoreditch, the next night he was on the stage of the London Palladium, opening for Kenny Rogers.  Obviously there were members of the audience that had been there as that got quite a large cheer.

He then played a new track from an album that is coming out soon and would be available on Spotify, considering artists get paid very little for having their music on there, it always amazes me when they promote Spotify.  Charlie said when he came over last year his head was all over the place –  he was at a crossroads not really knowing which way to go, but the reception he got all over the weekend at C2C last year gave him his confidence back!  We really are making a difference to these acts!

Cut Your Grove was next.  He said he hasn’t yet had a number 1 in the US, he was still waiting for that, but he had reached the top of the iTunes chart, thanks mainly thanks to us!

After Love Don’t Die Easy, Charlie talked about a song which was a silly song, but went down really well last year – Lawnchair.  He said it went down so well, he had decided to do another fun song – Take Me Drunk I’m Home.  The song was absolutely hilarious!  I certainly cried with laughter, it needs to be released!  It had lines in it like – What’s a drink gotta do to get a guy in this bar, What’s a dance gotta do to get a girl, and Take the car of my keys!  It was a really fast tempo song & impressed the hell outta me, singing lines with the words the wrong way round!

Another new song Call You Up followed, Charlie told us we were making some amazing things happen to him and we should never stop being awesome.  Charlie’s last song was Southern By The Grace of God, during which he did some pretty fancy guitar work!

At this point I should mention that it was just Charlie & his guitar on stage for this performance, he didn’t have a band with him.  Also I was sat up in the balcony, it was packed & from what I could see of the floor, it was really busy down there too.  Considering he had played the day before, this was a pretty good attendance!

As I said, I had waited a long time to see Charlie, he did not disappoint, he was fabulous & came across as a really great, fun loving guy.  An awful lot of acts this weekend spent a lot of time telling us the audience, how brilliant and amazing we are!  Odd really as shouldn’t we be saying that to them?  I guess just by being there & supporting them we are showing them that is how we feel too!