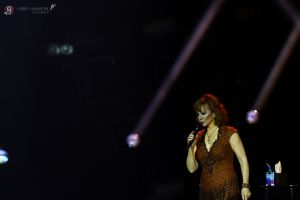 The last time UK fans of Country superstar Reba McEntire got to see her live was at the International Festival of Country Music that was held at Wembley Arena back in 2012. I for one was jumping of the walls when I heard the announcement that she would be returning for this year’s Country2Country Festival!

Poised and ready, the lights in the arena went down and the back screen lit up with, just simply, ‘REBA’. Her band entered the stage followed by the legend herself as she kicked her set off with ‘Can’t Even Get The Blues’. Her set was full of old and new hits as she took her time to introduce each song and engage with the audience.

Her set oozed professionalism and you could tell that she was a seasoned pro at this! There were some teething issues to begin with on her vocal levels but they were soon brought up and fixed without affecting the performance. She delivered a beautiful heartfelt rendition of ‘Whoever’s In New England’ (one of my personal favourites!) followed by Little Rock, And Still, and Going Out Like that before treating us all to a little medley of some of her favourites; kicking off with the classic Linda Rondstadt hit ‘You’re No Good’.

I felt privileged to be in the audience to watch Reba perform however it was clear as her set continued that not everyone felt that way. Many people left and some around me who had stayed were just talking amongst themselves or just sitting miserably in their seats. I appreciate that everyone has different tastes in music and that’s what makes music so diverse however the lack of respect that seemed to be shown to a woman that has paved the way for so many and been a staple name in real country music was beyond me. I hope that it wasn’t noticed by Reba because had I have been in her shoes I wouldn’t be coming back here in any hurry! Regardless she continued through her set and went from strength to strength.

She sung her latest single ‘Back To God’ from her new album ‘Sing It Now: Songs of Faith & Hope’. It is such a beautifully written song and McEntire sings the song with such conviction that I felt myself so caught in that moment, I am not a religious person but for those three minutes… There was something really special about that song. No doubt knowing that was a song that could split the audience over here, it was followed up by a fun version of Swing Low Sweet Chariot.

Of course the Kelly Clarkson track ‘Because Of You’ and ‘The Night The Lights Went Out In Georgia’ were also part of the set.

She also sung the duet ‘Does He Love You’ with her talented fiddle player and backing singer, Jenifer Wrinkle but it was her encore that it was clear everyone had been waiting for.

As she finished up her set and exited the stage the crowd roared, knowing there was one song left that she couldn’t leave the stage without playing… After 30 seconds or so of cheering the back screen lit up with the beginning to the ‘Fancy’ video. As it came to a close and the band began playing the song, Reba reappeared wearing none other than a sexy red dress just like the one we all think of when we think about the character Fancy Rae Baker.

There isn’t much more to be said! She came out and gave a fantastic performance of the track to finish of her set! I hope we see her over here again soon! I will have my fingers crossed!