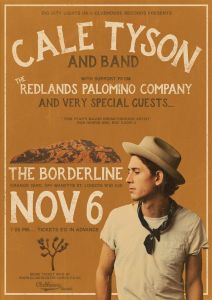 This young native Texan is getting quite a following in the UK, and having missed his tour here earlier in the year to promote his album ” Careless Soul” I was both surprised and pleased to see late Autumn dates announced. A big fan of his blend of musical genres and his vocal style, I was interested to hear how the songs would sound live, without the big production the album provides, and was looking forwards to the evening ahead as I stepped out into the chilly November weather.

Wanting to catch the two support acts I arrived at the ( already busy) venue just in time, as Nashville’s Erin Rae and the Meanwhiles were about to take to the stage, and wow was I glad I saw their set!

Guess if I had to describe their sound, it would be Americana/folk, and this stripped back version of the full band ( formed just four years ago) totally captivated the audience, which didn’t go unappreciated, as Erin said ” listening is not always required for an opening act”! The threesome really impressed me with their playing, harmonies and beautiful, gentle songs. But most of all, I loved Erin’s intoxicating lead vocals, which have drawn comparisons to Joni Mitchell and which Rolling Stone magazine have described so well as swooning and soothing. Their album ” Soon Enough” was released independently in the States but picked up by Clubhouse Records over here ( the label all the evening’s bands share) and they are playing some headline dates while on their first visit to the UK as well as opening for their friend Cale.

Highlights of their set for me were the album’s title track, plus ” Clean Slate” , Pretty Things” ( inspired by an obsession with the great depression!) and the yet unrecorded ” Wild Blue Wind” . Oh and they played and a stunning cover of ” Killing the Blues” ( most famously recorded by Alison Krauss). Judging from the reception they got after their set I won’t be surprised if they return here in 2017, I really hope so!

UK’s well established six piece ” The Redlands Palomino Company” were next up, representing the rockier side of country music, and were a bit of a disappointment I must admit despite the obviously talented musicians in their line up. The vocals were totally drowned out ( even after, half way through the set, they asked for a bit of a tweak by the sound engineer to help remedy matters) and they got very little attention from the ( by now) packed house. Maybe not the best venue to have heard them live for the first time.

Shortly after 9.30pm Cale and his musicians appeared on stage to a huge cheer, launching straight into ” Staying Kind” ( holding its own even without the heavily featured brass section of the album version) after which we were greeted with ” My name is Cale Tyson, nice to be back in London” ( cue another cheer) and he already had the audience in the palm of his hand. Without his own band on this occasion, it transpired that there had been time for only one rehearsal before this opening night of the tour, full credit to them for sounding so tight under the circumstances and in particular I must single out the fantastic pedal steel player Chris Hillman who also doubled up on lead guitar ( bass and drums completing the line up, Cale as usual on acoustic guitar ). He was also joined on stage for much of the set by Erin, their voices blending seamlessly.

His album ” Careless Soul” was naturally strongly represented in the set list, it is yet to be released stateside, ” you guys are great, you live in the future!” we were told, which hopefully means we are set to see more visits from Cale here. A quick mention of his ” outfit of choice” for the evening, a baggy mustard coloured boiler suit ( along with trademark hat ), when asked by someone what it was all about he said that as they were visiting Scotland on the tour he needed something that would keep out the cold ! For a slightly built man, Cale has huge stage presence helped in no small way by his distinctive vocals, sounding equally impressive on both uptempo, more light hearted numbers ( such as the fabulous ” Easy” which he said was written about the worst tavern in Nashville, advising that you need to get checked out for diseases after a visit!) and the slower ones which are, to my mind where he really shines and connects emotionally with the listener with ” Get Out Of Town”, ” Long Gone Girl” and “Save Me” ( which he introduced a being a song about cheating) sounded particularly haunting. “Travelling Man”, one of my ( and many peoples I think!) favourites of his, was a definite highlight of the night for sure, the aforementioned steel just perfection.

Written about a musician friend who was having relationship problems and decided to help get over them by going on the road, the friend thought it was autobiographical when he heard it apparently! Ending the relatively short 45 minute set with the energetic ” Railroad Blues” ( a track which has no doubt been in no small part responsible for Cale being likened at times to Johnny Cash) the band left the stage but only for a few minutes, in fact just long enough for them to find out that their van had been towed……surely the venue should have instructed them where was/wasn’t ok to park were my thoughts……but anyway, I digress, and saying that ” encores are meant to be sad” we heard a song that had apparently been written in the shower, ” Old Time Blues ” from his 2015 album ” Introducing Cale Tyson” with Erin once again harmonising beautifully.

Reflections On 50 Years of CMA