Last Friday I headed out for my first country fix in what seems like FOREVER!  C2C back in early March felt like an eternity ago so it was great to head up to Southern Fridays in London.  It had took a few trips to the event in the past to fully value and appreciate what makes the event work so well and how it has now become without a doubt the best country music party the UK has to offer!  How the night has developed since the first running at Vauxhall almost 2 years ago is a really good example of an event being for the people attending it.  Max is really open and most importantly realistic about what the event is and endeavours to take on feedback to make the event grow even stronger.  They really listen to feedback and what makes this work so well is that you know that it is Max who is running the event and he is not only very visible throughout but goes out of his way to speak to people when they arrive which I feel is really important to making people new to the event feel welcomed.

The venue they use at Electrowerkz is superb with the separate rooms which means that people that don’t want to listen to the live act and want to talk to the friends arn’t detracting from people that are there for the band.  They incorporate a lot of different elements on top of this with some line dancing, a rodeo bull, photo booth station and a dj set after the band.  The separate rooms mean you can pick and choose with the central room with the quirky tube carriage bar is perfect for this.  Bar service at Electrowerkz always seems quick and whilst beer from cans is not everyone’s ideal you can’t really complain at paying £4.50 if you have been to CMA Fest and are willing to spend $10 on a can of Bud Light!  It does attract people that are not the quote unquote “typical UK country fans” with hen nights or people playing dress up often seen and I actually really like going somewhere where you don’t recognise everyone at the event where everyone wants to know everyone else’s business but just people wanting a good time.  Baylen is the go to guy for knowing exactly what songs people want to hear as a dj where he brings a great mix of classics and new tracks that will keep the dance floor full.

With reference to the live band, this event featured Royal South who are an Anglo American trio who despite only releasing their debut single “Cry, Cry” earlier this year already have a strong and loyal following in the UK.  SaraBeth has been a regular visitor to these shores along with Essex native Glen Mitchell making numerous return visits but this had been the first time I had actually seen them performing as a trio with Vickie Vaughan.  For a group with very limited material at present that people would be aware of, they delivered a fantastic Friday night party set perfect for the event with a variety of sing-a-long covers, some of their forthcoming new material which included their next single “Shh (Don’t Say a Thing)” that can be pre-ordered HERE along some of SaraBeth’s solo songs in the set that fans were more familiar with.

A great fun set to really get the crowd going which really highlighted why there is already considerable demand for them to be an even more regular visitor to these shores and how they are quickly building a dedicated fanbase.  The trio have shows in Leeds and Kent during this visit to the UK, with another trip over here in July to play the inaugural Dixie Fields festival which also will feature Lauren Alaina and Ward Thomas in Chelmsford before a more extensive tour in September.  Full dates are displayed below and tickets for the shows can be found HERE 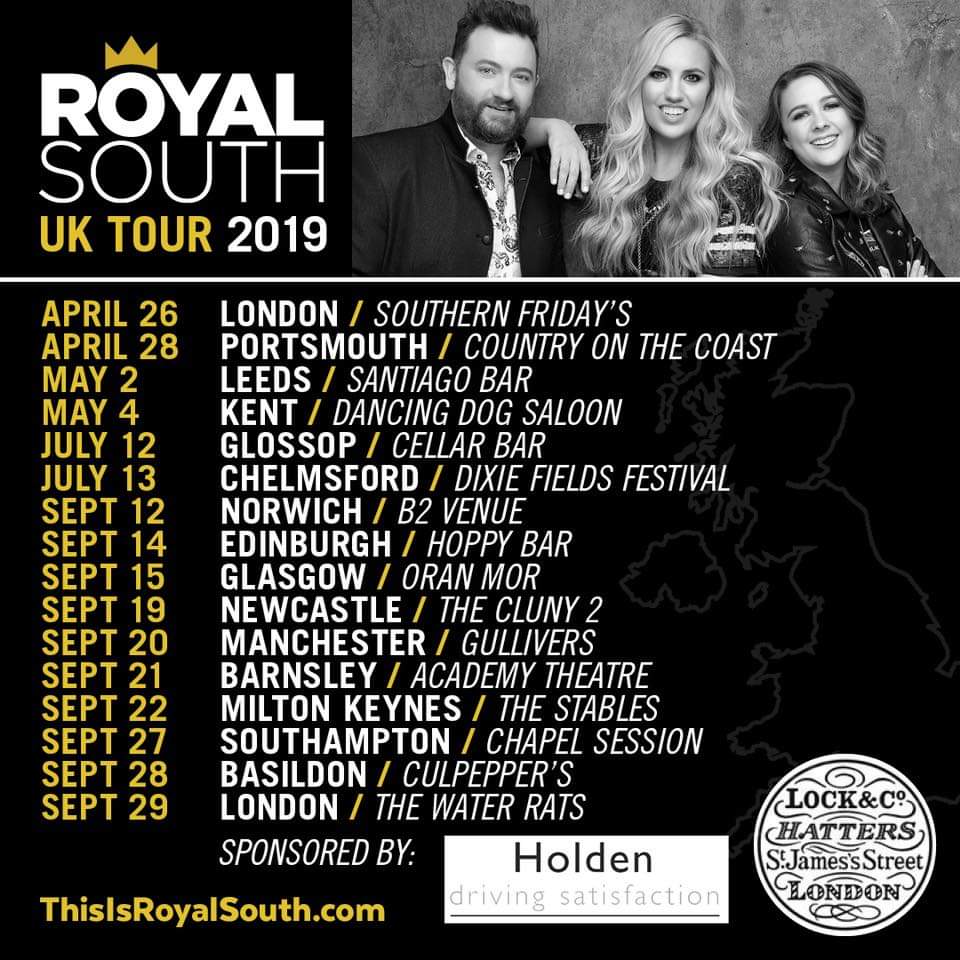 The next Buck’ N Bull Saloon event will take place on Friday 28th June at Eleckrowerkz in Islington (close to Angel station) and to mark the events second Birthday will feature live performances from 2 of the UK’s best live bands: Holloway Road and Remember Monday!  In addition to this the event will last an extra hour with the fun going on until 2am!  More details and ticket information in due course can be found HERE.

Following on from this, they will return to host the Southern Friday’s boat party to launch this year’s Nashville Meets London on Friday 26th July (tickets costing £45 and further info are available HERE) and will also be hosting the Friday Night After Party during this years Long Road Festival where there will be some changes from when they hosted lasted year.  This will include Max bringing along the rodeo bull that appears at the London events and after listening to feedback from attendees last year there will be access to a bar in the Interstate tent! – Hope to see you there at some or all of these events.

Erica Stone tells about her amazing journey with her new Album, &...

Need to Get Away? Country Cruising Has You Covered!