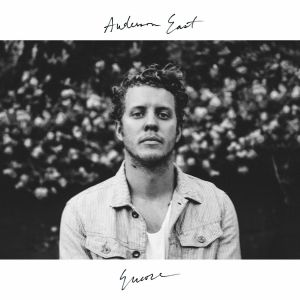 It’s not often I find myself far from my home in Nashville, reviewing new music, but here I am, sitting in the spare bedroom at my parents’ house in a suburb of Buffalo, New York.  Yes, THAT Buffalo.  The one where the sun never shines and it snows 365 days a year and twice as much every February 29th.  THAT one.  All quite hilarious if you’ve ever lived in Buffalo and suffered through several green Christmases in a row, after dreaming of that picture perfect white one everybody in the SOUTH sings about.  Hang on,  I am actually going somewhere with this weather nonsense.  There is a little bit of snow piled up around here, but all the salt trucks in Erie County couldn’t melt Mother Nature’s winter wonderland as effectively (and beautifully) as what I just listened to.

For a while I’ve been on a streak.  Nothing but great records to review, and I was thinking this was going to be the one to put things to a screeching halt.  If ever I was wrong about something, this was it.  Anderson East’s new album, “Encore”, set to release Friday, January 12th is mind blowing.  I don’t even know where to start.  On this record, he’s a chameleon.  Each track is unique.  He’s soulful, he’s bluesy, he’s a rock star, he might even be the reincarnation of Otis Redding (and I do believe that).  He’s the biggest musical surprise I’ve received lately.  I must confess, I never listened to him before, and while I could kick myself in the teeth for that, I’m not.  This album was worth the wait.

Born in 1988 in Athens, Alabama, East has time on his side.  Still young and already cranking out songs that make you stand back and take notice, we have years to see what else he has up his sleeve.  Good news for us.  He’s got great friends too.  Friends that write very well and like to write with him.  People like Chris Stapleton, Ed Sheeran and Dave Cobb.  I think he’s doing something right.

This album for instance.  The first single, “All On My Mind”, was released in August of 2017 (somehow your humble reviewer missed it during all these months, but I’m all caught up now, don’t you worry).  This one has East stretching his voice all over the place alongside a pounding beat that you just can’t help allowing to grow on you immediately.  It’s pop gold.  It could be mixed or served straight up.  I think you’ll be finding it in clubs everywhere.

Speaking of pop gold, “Girlfriend” also qualifies.  I mean, what could be more daring than a song that addresses the theme of a guy admitting to another guy that he’s got the hots for his woman?  This one completely goes there, but wait, there’s more!  It goes there AND it sounds so slick, you almost have to side with the guy who’s about to steal the other one’s girl.  Isn’t that just about joining Team Lounge Lizard?!  You bet!  Anderson East, at least in my estimation, has done the impossible.  He has found the magic potion to make us actually like THAT GUY.  “I think I’m in love with your girlfriend.”  It keeps on repeating throughout the song.  By the end, we’re just cheering this guy on and showing him ads for engagement rings.  Play it at weddings.  Just for fun.

I haven’t talked about East’s voice yet, but what is going on here?!  Is this Otis Redding?  Are we SURE he’s not still alive?  Otis Redding perished tragically in a plane crash in Wisconsin in 1967.  Anderson East was born in Alabama in 1988.  Could East BE Redding reincarnated?  If I didn’t know who it was singing in some of these songs, I would swear it was Otis Redding.  “Somebody Pick Up My Pieces” is one of them.  This one has a broken man telling his broken tale.  “I surrender my crown, somebody pick up my pieces, it’s just me coming down”.  It just gets more and more soulful and passionate as it moves along and all I can say is East has a vocal gift and it really shows here.

My very favorite track on the record is a number called “House Is A Building”.  When I’m reviewing, I scribble notes.  The biggest mess you can ever imagine.  Nobody could ever make sense of them.  Sometimes even I have trouble, but initially for this one, I only wrote two words, “Piano” and “Voice”.  I thought to myself, “That’s it.  That’s all I’ll need.  This song is so amazing and I loved it so much, I won’t need anything else to remember it.”  Then the song progressed, and I quickly scratched out, “LIVE LIVE LIVE”, which didn’t mean I love to live, it meant I NEED to see this song performed LIVE.  I loved it that much.  There’s a line in the song that says, “House is a building, home is a feeling.”  After making my move from New York to Nashville three years ago, I truly believe that.  Our house in New York was built from the ground up, exactly how we wanted it and we loved it, but it was just a building after all.  Home.  That’s a feeling.  You can’t build that with hammers and nails.  This song might go down as one of my favorites ever eventually.  East did everything right with it.

Interestingly, the last track on the album proves that Anderson East really is a chameleon. There are 11 songs on this album.  In the interest of time and space, I’m not going over all the tracks (but trust me, they are all very different, yet all quite good, with brilliant arrangements and solid production), and one of the most interesting, and introspective, is the final one.  Track 11, “Cabinet Door”, is nothing short of a total tearjerker.  A sad, sad tune, void of all the bells and whistles on all the other songs on the record, of a man talking to his wife’s ghost.  It’s all quite simple, and it’s actually something that’s probably done all the time in households all over the world.  I looked at it as a sort of gentle cooldown from the rest of the album, albeit a sad one.  Then again, I got the mental picture of a circle after it was over.  I hit the “next” button and started the album over again and pulled myself out of the darkness immediately.  I’m not much of a ballad girl, especially not a sad ballad girl.  I was ready to rock to my soul again, and I knew just the guy to get me there.  Buy this album.  I listen to a lot of music and I was out of the loop.  I’m in the loop now.  Let’s get everyone in the loop.