A CELEBRATION OF AMERICANA & COUNTRY! 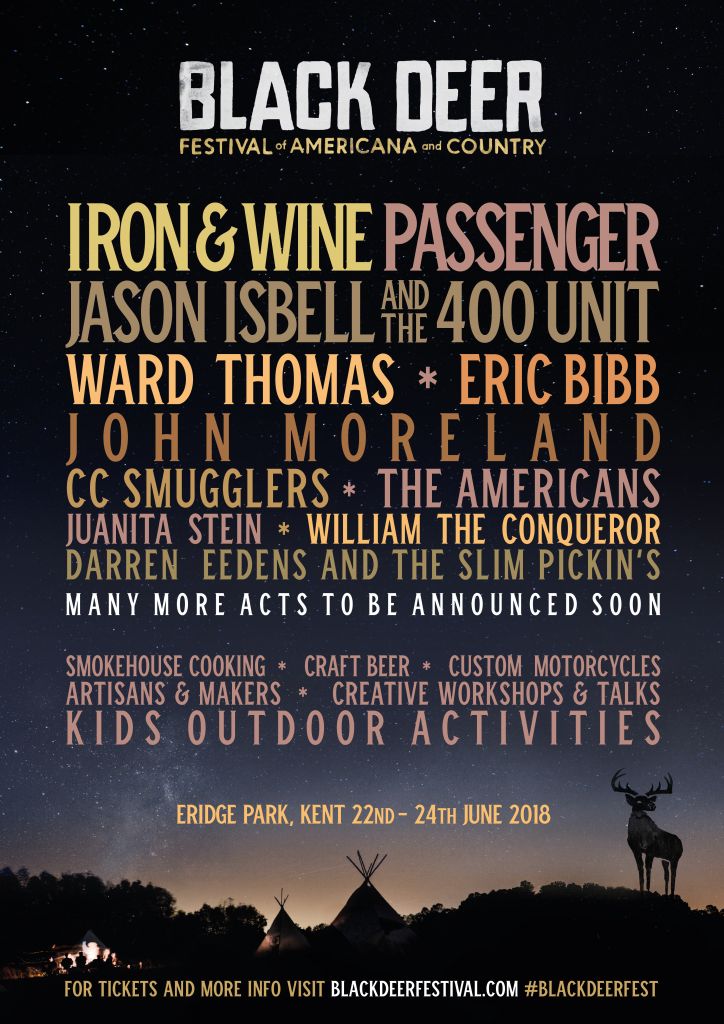 Bringing you an experience like no other, Black Deer promises you a jam-packed weekend of celebrating all things Americana and Country! Taking place in the beautiful surroundings of Eridge Park, Britain’s oldest deer park, located on the Kent/East Sussex border near Tunbridge Wells, just a mere 50 minutes outside of London.  You can expect an array of authentic americana-style meats, smokey whiskeys, bespoke custom bike showcases, storytellings from cultural pioneers, not to mention the incredible line-up of your favourite artists across the Americana, blues, roots, authentic country, folk and bluegrass genres.  This family-friendly event encourages people of all ages to completely immerse themselves in all aspects of this culture celebrated by millions on either side of the Atlantic and delivering an authentic, Roots-style line up to the UK.

Romantic, Americana-tinged songwriter Sam Beam – better known as Iron & Wine – will be headlining the Saturday of Black Deer. Fifteen years after his first album Iron & Wine has returned with Beast Epic, gaining critical acclaim from the likes of Pitchfork, Guardian and Rolling Stone, you won’t want to miss these new cossier-than-ever tracks live for the first time in the UK from our favourite indie-folk legend.

Award winning Brighton born, folk singer-songwriter Passenger is the first headliner to be announced for Black Deer. After achieving a number one in seventeen countries, selling over two million records, and reaching an astounding level of 1.7 billion views on Youtube, Michael David Rosenberg is back with full force, making his UK festival exclusive headlining the Sunday of Black Deer!

For nearly two decades Grammy Award winner Jason Isbell has been one of the most unique voices in Americana. From his work with Drive-By Truckers through to his award winning solo work, he continues to be one of the genre’s most vital talents. He’ll be bringing his band The 400 Unit to the inaugural Black Deer in a UK Festival Exclusive.

Modern country duo and twin sisters Ward Thomas have quickly established themselves as one of the British country music scene’s most successful acts. Championed by BBC Radio 2, their sophomore album ‘Cartwheels’ became the first album by a UK country act to reach the coveted number one slot on the UK Album Chart upon its release last year.

“We are really excited to play at The Black Deer Festival this June, it is so encouraging to see more country festivals pop up in the UK, and we have a feeling this is going to be a special one!!! We’ve recently been working on new material which makes it even more exciting”

Long-standing blues sensation Eric Bibb promises to deliver a fiery and soulful rendition of the anthemic songs which have soundtracked his five-decade spanning career and hailed as ‘the new face of folk rock’, John Moreland will be bringing his expressive whiskey-tinged literary ballads to Black Deer Festival. Elsewhere, making the leap from buskers to headliners, CC Smugglers will be bringing their americana-inspired rhythms to Black Deer and are sure to keep you on your feet and wanting more!

The Americans caught the taste-making eyes of Jack White, T Bone Burnett and Robert Redford during the making of the award-winning documentary ‘American Epic’ and between them, have worked with Nick Cave, Tim Robbins and Lucinda Williams.

Having made her name as the lead vocalist and guitarist in the band Howling Bells, Juanita Stein heads to Black Deer as a solo artist following the release of her acclaimed solo debut, America, last year. An evocative and beautiful album, Stein’s honeyed voice weaves stories of heartbreak and optimism in songs hailed by The Sunday Times as “A fab, dreamy journey into the dark heart of country-noir”. Expect spine-tingling treats from this indie-goddess!

“I’m thrilled to be a part of Black Deer Festival! A whiskey soaked, musical ode to all things Country and Americana. I’ll be bringing my band and songs down to Tunbridge Wells this June, see ya there!”

Praised for their grit and authenticity by the likes of The Guardian and NPE’s Ann Powers, Cornwall-based William The Conqueror are a three piece indie-rock group who perfectly chanel classic blues and roots throughout their grunge/indie filter. Their debut album ‘Proud Disturber of the Peace’ was released this summer and was shortlisted for UK Americana Awards for ‘UK Album of the Year’. Elsewhere banjo-pickers Darren Eedens & the Slim Pickin’s bring their distinctive honky tonk sounds to the festival.

“The boys and I are incredibly excited to bring our music to this new Americana festival! Motorcycles and Banjos, this looks like the real deal, it’s gunna be one hell of a good time. Catch you on the Saturday at Black Deer Fest! “

Alongside a sunkissed and emotive music programme, Black Deer will be rustling up a stunning variety of classic food & drink to take revellers deep into the heartlands of all things Americana – expect an array of mouth-watering delicacies across the Black Deer site served up from bespoke built hostelries and headed up by the revered cookbook authors, food writers and founders of Grillstock Jon Finch and Ben Merrington.  Pioneers of the American barbecue scene in the UK since 2010, Jon & Ben created the original barbecue and music festival drawing 20,000 meat fans annually to their weekend of meat, music and mayhem.

Having created the biggest barbecue experience the UK has seen, the pair are experts on all things low ‘n’ slow having opened five American smokehouse restaurants across the UK as well as co-authored an Amazon best-selling barbecue cookbook.

Serving up their wholesome smoked meats for a true treat for the tastebuds – you’ll find the very best ribs and brisket – drenched with sweet sauces from homegrown suppliers. From a variety of acclaimed craft beers, to artisan ales, amazing ‘cups of Joe’ and straight from the barrel, smooth as silk aged whiskies – your senses will be transported from the very first bite and sip.

Taking place as one of the centerpieces of the festival will be Bolt. Founded in 2013 by Andrew Almond, it has quickly become a key protagonist within the scene, as a brand, a lifestyle and an authentic participant of a culture rich with heritage.

Bolt Motorcycles London will be curating an area of the Black Deer Festival bringing together the rich history and diverse subcultures that have surrounded the ultimate symbol of counter culture – the motorcycle. Since motorcycles were first invented they have been customised either to enhance their performance or to reflect the riders identity in regards to fashion, music or politics.

Meet many creatives showcasing their artisan wares, and cultural pioneers sharing their stories. Try your hand at a range of Americana-inspired experiences, from whiskey tasting and wood-chopping, to leather-craft and denim-customising. Younger folk can fill their boots with exhilarating outdoor adventures, cinema, Ukulele lessons and there’s even the opportunity to perform on a stage dedicated specifically for created for for budding juniors.

Black Deer have teamed up with Supajam Education in Music and Media (SEMM), a multi-award winning educational provider set up by David Court and Nick Stillwell for  young people aged 16+ with special education needs and educational health care plans. The school support disadvantaged and vulnerable young people, many of whom have never achieved a qualification and currently have a 93% music diploma pass rate. The promoters of Black Deer have supported Supajam for many years offering employment opportunities to the students on many of their events.  Black Deer Festival has become the main focus of the 2017/2018 educational curriculum having given SEMM their own stage at the festival to manage, book and curate. The festival team will be supporting and working closely with these students all year.

“This is an unbelievable, and potentially life changing opportunity for these talented students to put their skills to the test and to show the Black Deer community what I know they’re capable of.”

The entire experience will bring together a passionate set of subcultures, create a community of like-minded people, spanning generations who follow the music but who also subscribe to an authentic way of life.

The driving force behind Black Deer are no strangers to the festival world – having produced and directed some of the most loved shows in the UK including the Hop Farm Festival and Hyde Park’s Party In The Park. Entertee have produced festivals featuring some of the world’s greatest Americana artists including Bob Dylan, Neil Young, Eagles, Van Morrison, Patti Smith and Mumford and Sons .

Black Deer will be using a cashless RFID system on site for ease, security and convenience of festival goers. You will be able to upload money directly to your wristband at either the booths on site or online and any money left over will be refunded to you. You will receive your wristband when you arrive on site and exchange your ticket. (please see terms and conditions below)*

“Having been in the music industry for many years, producing events for other people, I am proud to  finally take a giant step to having a festival of my own. Set in  a beautiful part of the world, that I know and love, with a genre of music that holds so many memories for me, is really exciting as well as extremely challenging.

I hope that Black Deer can bring to a wider audience, all the love and warmth that I feel about about our festival.  All the characters who make up our wider team,  have the same ethos. We are all working together to ensure that,  anyone who steps foot into the world of Black Deer, will want to come back for many years in the future.”

“Black Deer is the coming together of all the things I love and value in life. Things that all have one thing in common – authenticity.

From real Americana & Country music, honest wholesome food & drink, to the raw beauty of the great outdoors – where the experience of being a mum to two young boys has allowed me to be part of designing a natural playground full of family fun and adventure.

But more so, I love that feeling of being part of a community. And that’s what Black Deer is all about for me – bringing passionate like-minded people together, through authentic good times.”

Valid Tickets will be exchanged for Wristbands on entry into the Festival. Wristbands cannot be issued until the day / date as stated on the Ticket and are only issued directly to the Ticket Holder on production of photographic ID (driver’s licence or passport). It is not possible to collect Wristbands on behalf of other people and all Wristbands must be placed and secured on the individual’s wrist directly by our staff. Your Wristband will be invalidated if any part of it is removed, detached, altered or defaced. Wristbands will not be reissued or replaced regardless of whether you still have your Ticket.