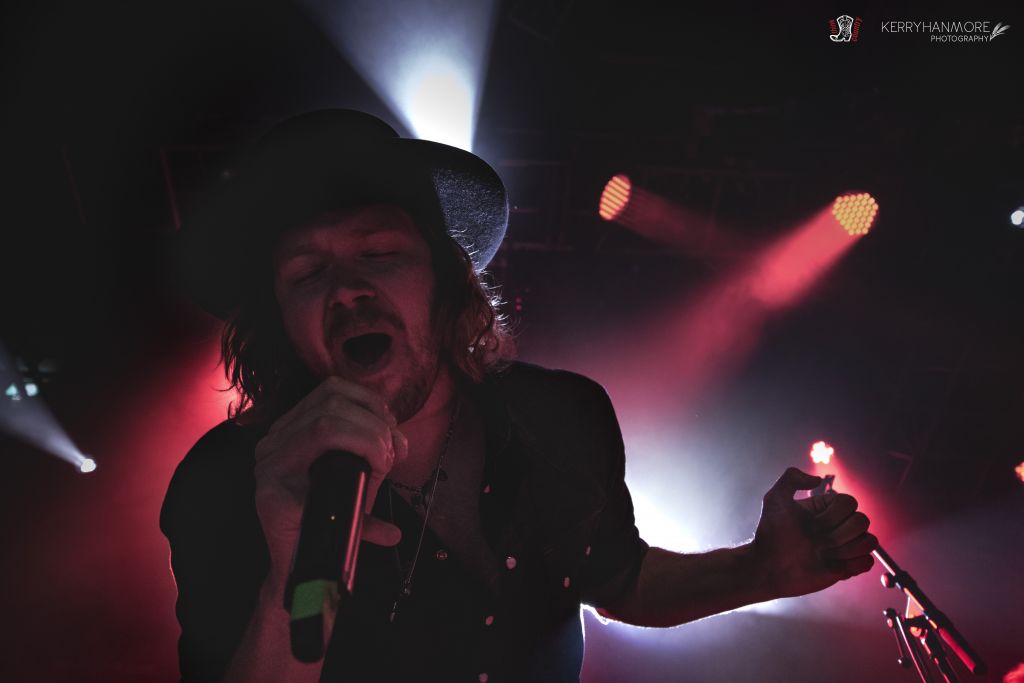 Tonight was to be a little different as I was going to this gig with Annette Gibbons, founder of Think Country (the Boss!!) When Annette mentioned bringing wine for the train, I thought well at least it isn’t going to be THAT different. How wrong a girl can be, yes it was very different!!

Annette made the fatal error of leaving me in charge of travel arrangements, natural I suppose as she was going to stay with me after the gig! She was interviewing the band at 5.20 & had asked if I wanted to sit in,. I sat & thought about that for a while, well about 5 seconds actually!! Of course I wanted to sit in. So, we caught the train that would get us in before the train that would get us there on time. Despite the fact that we were travelling mid afternoon on a Wednesday, the train was pretty crowded. We managed to find seats by asking 2 girls to please move over slightly & stop taking up 2 seats each! Our train then called at an extra couple of stops due to an early train being cancelled. As a result by the time we got to London we were about 20 minutes behind schedule and were not much ahead of the train that would have got us there on time. This meant we had hit the beginning of the rush hour & the tubes were more crowded than I had anticipated.

We took the tube to Highbury Islington & rocked up at the venue with 5 minutes to spare. I felt well impressed with myself, until, while Annette was looking at her phone trying to phone her contact, I looked around us.

“Too Early I expect” Annette responds.

Worried I fished my ticket out my bag, thing was, I had 2 friends coming who I knew would be 1st in the queue & I had another friend who I knew was going to be in the queue by about 5.00, so where were they? Hoicked my ticket out, yup I had taken us to the wrong venue!! We were at Islington Assembly Rooms, where I had seen Maddie & Tae a month ago, however A Thousand Horses were performing at O2 Academy Islington!! Horrified at my error I quickly looked it up on Google maps, we were 15 minutes walk away. Gulping I gaily told Annette, oh it is only 5 minutes up the road here! Unfortunately Annette had Google Maps too! Oh dear! Interview for full time job not going well here, thankfully Annette is more forgiving than Lord Sugar! There was no hope of us getting a taxi as there had been an accident in the road, a motorcyclist had been knocked off his bike & as a result the road was closed in both directions while it was sorted.

We managed to get to the correct venue just under 10 minutes late, so apart from the fact that we were hot, sweaty, dishevelled, needed a glass of water & a wee, all was good!

Annette interviewed the boys while I listened in.

I knew of A Thousand Horses before C2C when I saw them at the Brooklyn Bowl on the Saturday afternoon, but I didn’t really know anything about them. As soon as we walked in though we both got hugs from all of them. Now those of you who know me will know I should come with a warning sign – HUG APPROACHING – so to be voluntarily hugged before I hugged that is me won over FOREVER!! Not only that, I wouldn’t have dared to hug them, I would have been happy with a hand shake! Am I easily pleased?? 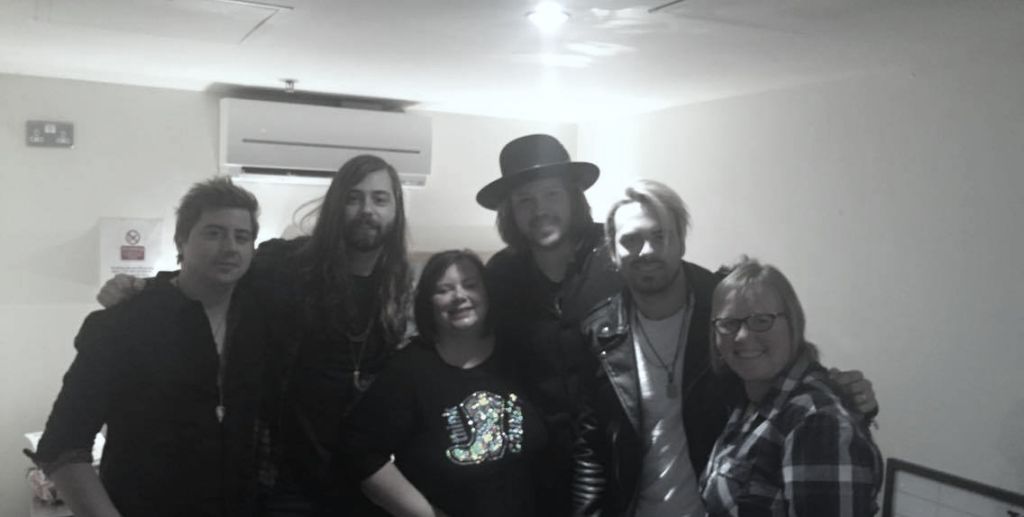 In the interview the guys came across as really genuine down to earth guys, humbled by the fact that they were only over here less than a year ago & yet we still wanted to see them again! Don’t think they realised that for some of us we only had a taster in March, now we wanted the full bifta!

You made your first appearance in the UK at Country 2 Country and its fantastic that you are back already, what made you come back to the UK so quickly?

” When you grow up dreaming of being a band, you know touring America is part of that life.. but playing in London is something you really dream about”

“We really enjoyed playing at Country2Country, but didn’t know what to expect, but the fans were so great, we knew we wanted to come back quickly” 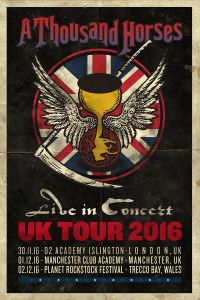 We left the interview, now desperate for a wee & sod the water, where was the nearest pub? I needed to make a quick phone call, I hadn’t even finished the call & 2 friends had seen me & come over to say hello. We set off in search of the pub where there were a few people meeting. Sods bloody law we walked off in the wrong direction (this time not my fault, 1 of the friends who had seen me marched off confidently!!) We only went a short distance before I said this isn’t right, Annette & I have just come up this road & I didn’t see the pub. Guess where she was leading us?? Yup Assembly Halls!!

Finally we arrived at the pub. We had to be really rude & run past everyone as we were now so desperate if we had started hugs & introductions there would have been puddles!!

Bladders emptied & dignity restored we joined the crowd & I made introductions. We were 3/4s through our pints when Annette said some other friends were in a different pub. “Oh” I said, “That is just across the road.” “How do you know, I didn’t think you knew the area.” Annette responded. I just pointed, you could see the other pub from the window of the pub we were in. So, we finished our drinks & ran across the road to the other pub & met more friends!

This is where the evening started to swerve off my normal course. 7.10 I said to Annette, “Doors are open, we should think about making a move.” Ever said something to your boss & instantly regretted it??? “Or not” I quickly added. After a quick conversation, that seemed to involve the whole group it was decided we would have another one and miss the support who nobody knew. I had read on Facebook (all & ever knowing Facebook!!) that the group are psychedelic rock (I couldn’t even spell that, I had to put it into Google as even spell check didn’t get what I was trying to say!) I did point out that I was supposed to be reviewing, but Annette countered with “A Thousand Horses.” So, another beer later we made our way to the venue. As we got there, the support (Purdon) were still on & there were an awful lot of people outside – taking the air! One of my friends who inadvertently appears in a lot of my reviews said they were like Kate Bush on acid in 1973! (Thank you Nikki Averkiou!)

I would normally now comment on the venue as I hadn’t been there before, but all I saw was the bar & the Acoustic Journey boys! Another beer! Oh dear!

We chatted to some other people who we knew, but hadn’t seen yet. One lady at the bar recognised Annette & I from our conversation, she just looked at us & said “Hello, you are Helen Pocock & you are Annette Gibbons!”

Michael Hobby (lead vocals) played a mean harmonica though, I am always impressed when someone can get that piece of tin to make a sound that is recognisable & it was pretty darn hot!

Having only seen you at festivals, how will tonights headline show differ?

At festivals, it is sometimes limited, but tonight is our show and we can play on as much as we want!

After Travelling Man Michael said raised his glass & said “Cheers”. Normally I am down near the front so I can’t see the response when acts do this, standing near the back, a lot of people raised their glasses!

We hope you have bought your fabulous backing singers with you

“Yeah, they are here… well they will be, there are flying in later, probably on a private jet!!”

Those girls are great, they have a real sass about them!

Many of THE great bands had great backing singers and we love that sound. When we originally released Southernality (the first time) we had one of the girls sing on that and it grew from there.

Another couple of songs & all of a sudden the stage was empty! The music was still paying, but the boys had disappeared! The guys had all sat down on the edge of the stage & carried on all sat down! Now here is the thing that is odd, I haven’t seen any photos of them doing this on Facebook, so I am not convinced they didn’t sneak off for a quick shot of JD!!

The crowd were all in full voice now & giving the band the full UK welcome, showing how we knew all the words to all the songs. We were a bit thrown when Michael said “we are going to do a new one now, hope we don’t mess it up!” Thing is, if they mess it up, unless they mess it up HUGELY, how would we ever know??

You are recording a “Live to Vinyl” in London this weekend?

When we told told about this opportunity we were so excited. We are doing a few old songs (which will sound quite different) and a few new ones.

There was a cover of Black Crows – Hard to Handle (Thanks to Andrew Jones, Acoustic Journey for that, I had no idea what they were singing but Jonsey was in full voice, so I asked him what it was!! Once again, not what you know, it is who you know!!)

By now, I was several beers in, it was dark, the music was great, my notes are illegible – too dark, I couldn’t see!! My excuse & I am sticking to it!

I had high expectations of A Thousand Horses, when I saw these guys at C2C, unfortunately the sound was off, So I was in 2 minds about seeing them again, when they were announced. I mentioned it to my friend who I normally go with & she said “No not for me” I thought oh ok. When she rang the next day to say she had spoken to her husband & he said “No, actually I would like to see them” I thought Yay!! Please do not EVER tell me friend’s husband he was right!

The sweet sound of Southern Rock rocked Islington that night. Not only that, before the last song, Michael said that the guys were going to hang out with all of us after the show & true to their word, the queue went round the hall, but they signed & had their photos taken with so many people. They really are lovely people, their mumma’s should be prouda those boys! 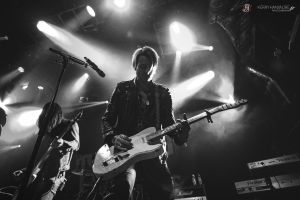 I do think though that we are becoming spoilt with acts doing this & although I love the way they do it, it worries me that audiences are starting to EXPECT acts to do it rather than realise we pay the ticket money to see them perform, not for them to stay for easily an hour after the show chatting & shaking hands & show what lovely people they are.