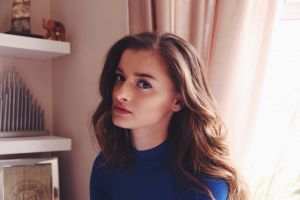 Tell us a bit about yourself?

Well, I started out originally in Pop music but every pop track I ever made had a country aspect to it, so one day I just sort of succumbed to it. It wasn’t something I actually aimed for, it just happened organically which I think is the best way to do it. If you try and force a style I think the audience can detect it really easily and it’ll be branded as inauthentic.

My brother and I always used to play Shania Twain’s ‘Come On Over’ album and fight over the CD. The first album I ever bought was ‘The Very Best of Eagles’ and the first CD I ever received as a gift was Britney Spears ‘Baby One More Time’, so I guess the pop-country marriage was inevitable.

I’ve only really been performing with the band for the last year. Before that, I was mostly an acoustic artist. My first gig with my original music was at The Regal Room in Hammersmith which has since closed. I was terrified for the first two songs but the third song was a breeze. The more I gigged, the more confident I felt. So I guess the most important thing I have learned is just to keep performing and the show will only keep getting better and better.

I mean the obvious one would be the Opry. It’s a stunning venue and legends have played there which is really intimidating but inspiring at the same time. There are some amazing venues in London though. I really want to play at Koko in London in the near future.

If you could open for any country artist who would that be and why?

Shania Twain for nostalgias sake. 10 year old me would be so happy but 23 year old me would be even happier! She will always be the Queen of Country in my heart. I heard that she was planning to stop touring after her 50th birthday but I think it was just a rumour so I am so relieved. I’ve never seen her live.

I love covering “Slow Dancing in a Burning Room” by John Mayer. He did this show in LA about 10 years ago and did an incredible live version of it. It’s my all time favourite song; the lyrics are genius. Every artist has a song that they wish they had written, and this one is mine. It’s a great song to play with a country inspired arrangement.

My band and I have a lot of fun on stage so I think the audience have fun too. It’s always a bit unsettling when an act takes themselves too seriously on stage. We change up the arrangements and intros of the tracks for live shows which makes it a little more interesting. We don’t just play it exactly the same as the recording, we try and give the audience a little more than they expected.

I’m noticing that people are becoming gradually more open minded with what music classes as country and it’s really exciting. Pushing those boundaries means that there are some really interesting production ideas coming out of the woodworks. It’s something that I definitely experimented with in the production of this EP and it’s something I’ll continue to experiment with in the future.

This year I’ll be mostly focussing on live performance and gigging in cities that I haven’t played in before, UK and abroad. 2017 is starting to look really exciting but I can’t say anything yet. I’ll definitely be writing a lot this year though, so there will definitely be some new releases, that’s inevitable.