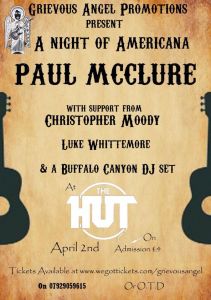 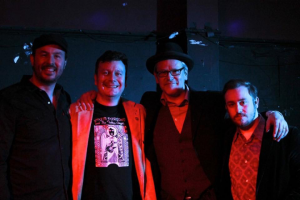 This was the first outing for Grievous Angel Promotions whose line up promised both an ambitious and multi-talented trio of singer/songwriters. The Hut (formerly known as The Zombie Hut, the town’s premier, 250 capacity, alternative music venue) is part of the Corby rugby club building on Rockingham Road and from the outside, looks just like…a hut. Entering the building took me back to student, alcohol-fuelled nights watching rock bands in intimate dark venues with the faint aroma of alcohol and slight stickiness in the air. Getting a drink before settling into our seats on the balcony, my plus one, who has never set foot in a rock venue in her life, saw an Applejack cocktail advertised but was disappointed to be met with a blank face upon ordering it and a sniggered retort that it was just there for decoration. The beer however, did not disappoint.

I’ve been a bit blurry on exactly what Americana is, having been brought up on classic country and hungrily worked my way through rock, metal, southern rock, country rock, constantly evolving and lapping up various types of musical genres to discover where my heart really lies. Well, it’s safe to say my heart missed a beat tonight as I discovered a whole new understanding of country music in Americana/Alt. Country. My notions of how country music should sound were blown out of the water by the magnificent performances of all three musicians – stripped back to just one man and his guitar.

Luke Whittemore opened the night with ‘Lonesome Level Crossing’, delighting the audience with his intelligent, thought-provoking lyrics and beautiful melodies throughout songs such as ‘If It Weren’t For the Rain’ and ‘Cold Up in The Hills’. Touches of Andrew Combs spring to mind in Luke’s subtle but powerful delivery. He mentioned his album has material on it written by the late Donna Sears and songwriters who write for Vince Gill. Impressive stuff. 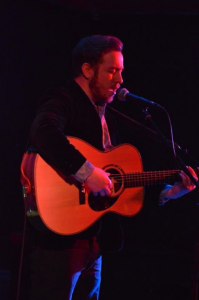 ‘A Man’s Got to Do’ led into ‘Have Mercy’ a song that he wrote about his two little girls (he doesn’t look old enough) and that was me – hook, line and sinker. Lines such as “Trouble plays a part in every man’s life, I’ve seen my fair share of tears” and “What these eyes have seen, I’ve done my best to hide” strike a resonance with every parent and the honesty of his delivery was a beauty to behold. His bio reads that he was “born into a family of musical mayhem” – no sign of mayhem here though, just a fine crafted singer/songwriter who deserves a lot of attention. At the time of writing, Luke’s album is out on the 10th June, available to pre-order on iTunes. Sign up to his mailing list and find out more via
www.facebook.com/lukewhittemore or visit his website www.lukewhittemore.com

Christopher Moody is usually found with his Underground Kings, a five piece Leicestershire based Alternative Country Rock band. Tonight, however, he is flying solo. Christopher is a statuesque, commanding figure at the mic and tonight, just as his name sake (an 18th century pirate) he is offering no quarter. Opening up with ‘Empty Bars’ and moving onto songs such as ‘Why Do You Call’, ‘Sorry’ and the brilliant new song ‘Lucky Ones’. His mastery of the harmonica along with his gritty, tinged with a hint of Springsteen, very distinctive vocals enrich every song. His delivery is slow and steady and on the powerful song ‘My Ghost’, he sings about love lost in the most heartfelt way I’ve heard in a very long time. Genuine, convincing and to devastating effect (yes, I got a lump in my throat). ‘405’ is a song that is getting airplay at the moment (including transatlantic airplay). It is usually quite an upbeat, catchy tune but tonight it seems fitting that its slowed down to a sadder, more melancholic version. Again the harmonica adds to this and enhances the bluesiness of this version. ‘Crushed’ lifts the mood and changes the atmosphere with a grittier, angrier sound and leads into a cover of ‘This is War’ by Canadian singer/songwriter Justin Rutledge. Christopher has just recorded his debut album and treats us all with a new song not recorded yet ‘Lamp Lights’, which ends with a Dylanesque harmonica flourish. I just needed a Jack Daniels in my hand during Christopher’s set and my life would have been perfect. 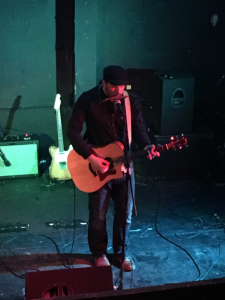 Paul McClure the self-professed ‘Rutland Troubadour’ takes the stage like the confident, alluring and extremely professional solo artist I expected him to be. His second solo album ‘Songs for Anyone’ has recently been released and follows his debut 2014 release ‘Smiling From the Floor Up’. Anyone who wears a feather in his hat is alright with me. Armed with his guitar, a banjo and a harmonica, he opened his set with ‘Long Gone Out of Here’ to a welcoming crowd, along with a few rowdy newcomers. He exudes an air of confidence that only comes with years of experience on the road. 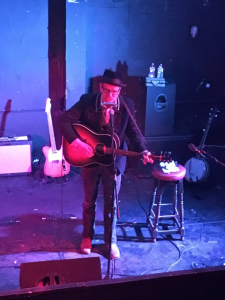 Paul immediately interacts with the audience, interrupting his performance to command their attention, instead of talking at the bar. Having never seen him perform before, there was a moment of disbelief – was he joking? He alluded to it being like talking over a hair dryer and then cheekily pointed out a bald man who it obviously wouldn’t refer to. Moving into ‘Holding a Ten Ton Load’ he stopped abruptly to ‘moan’ about somebody’s camera flash getting into his eyes and posed at the edge of the stage so they could get a good picture before resuming the song. Job done, the audience are totally engaged as he weaves his storytelling charms between each song, linking each one with anecdotes and the meanings behind his lyrics and songs. ‘Unremarkable Me’ follows, which is homage to his wife and his non rock and roll lifestyle. More stories lead up to an introduction of ‘Song Six’ which was inspired by a Louis Theroux interview with an inmate in the US prison system. Strains of Woody Guthrie’s ‘This Land is Your Land’ interweave seamlessly with Paul’s skilful guitar playing and storytelling.

There is much frivolity when a slightly worse for wear gig goer calls for a tambourine and is met with Paul’s answer of, “does it look like I work for the Salvation Army?!” Cue ‘My Big Head Hat of Dreams’, an inspiring song with some well used profanities which actually add to the overall impact instead of detracting from it. ‘Pollyanna’ (my personal favourite) follows, demonstrating that women in Country are not all victims in the modern age but often the protagonists. ‘I Could Be a Happy Man’ is a feel good song leading up to his piece de resistance, ‘My Little Ray of Sunshine’. Paul encourages us all to singalong with him and by this time there is no-one in The Hut that isn’t inclined to join in with him for the rousing chorus and cheeky shoop-be-dee-doo! The evening draws to a close with the tender ‘Everyday Is Mine to Spend’ which is as mellow as a glass of Tennessee Whiskey and I want a refill.

Paul is an incredibly talented songwriter with big, catchy melodies. Influences of Dylan and The Beatles are clear to hear in his music. His songs are at times very humorous, rebellious, sometimes sad but always refreshingly honest. His material is like him – confident, highly original and totally individual.

At one point near the end of the night, he explained how ‘likes’ work on Facebook to gain more exposure across social media, which is how artist popularity now gathers pace. “Please like me,” he asked and quickly joked “you don’t know how much it hurt to say that”. Well Mr McClure, it didn’t hurt me one bit to like you and judging from the warmth of the reception you received, those likes are going to keep on going up and up.
Further information at www.paulmccluremusic.com, www.facebook.com/paulmccluremusic
Twitter: @PMcCluremusic

Grievous Angel Promotions has been born from a love of Americana/Alt. Country music and Paul Mason is the man to thank for bringing Nashville to Corby. A list of further events can be found at the end of this review. Tickets are on sale and selling quickly so make sure you secure yours and help support the genre in Northamptonshire and the surrounding counties www.wegottickets.com/grievousangel.
Twitter: @corbyamericana Facebook: Grievous Angel Promotions

Reviewed by Caroline Gulla
On behalf of Think Country

@The Hut 19th May at 8pm. Tickets available from www.wegottickets.com