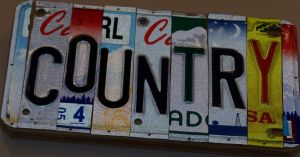 There isn’t one real definition of what country means to me. As a teenager it was about not being afraid to stand out, I’m pretty sure people at school thought I was the weird kid with my eclectic taste in music. I never wanted to follow the crowd though. However as an adult it’s about being able to network via social media and attend concerts alone but always being able to find someone to chat to and share experiences with.

To give you a bit of a backstory I grew up in a village into a family of Brass band players, well the half of my family I know anyway. Living with my Mum meant that musically my childhood consisted mostly of listening Magic on the radio and attending Brass Band concerts, she hates country. I did however go through thep op craze that most people did at that age, after all who didn’t love the Spice Girls?

It wasn’t until I was around 14 when I bought the ‘Best Of’ album by LeAnn Rimes that i really listened to country. Sure I’d heard the commercial tracks such as‘ How Do I Live’ and ‘Can’t Fight The Moonlight’ but I ended up falling in love with a track called ‘Blue’.

Flicking through the TV channels one afternoon I caught the end of American Idol, Carrie Underwood had just been crowed the winner. She sung ‘Inside Your Heaven’ and I was a fan from that moment onwards. Her debut album ‘Some Hearts’ is still one of my favourites today.

I started exploring the genre some more. Discovering artists such as Martina McBride, Miranda Lambert and Kellie Pickler. I’ve always been drawn to the female artists. I followed like minded people on social media as I saw it as a great opportunity to connect and discuss a genre of music that, up until recently wasn’t really appreciated here in the UK. I also started reading blogs as another way of reading what people thought about the latest releases, discovering new artists along the way.

In May 2014 I got invited to the Sounds Like Nashville showcase which was being hosted by Decca records in London. It featured The Shires and Cassadee Pope and was the first event of its kind here. I was offered the chance to review it, and after thinking about it I accepted.

Since then I’ve been writing reviews and doing interviews for Think Country.  It’s an incredible team to be apart of and I know I’ve made some life long friends, they almost feel like a second family

Now we have the annual Country To Country festival my hope for country music in the UK is to see it grow, it feels like we’re finally at a point where people are questioning their misconceptions and I hope it continues to move forward so people can experience what country really is.