In 1985, 4 of the biggest names in country music: Johnny Cash, Waylon Jennings, Willie Nelson, and Kris Kristofferson came together to form the super-group that defined “Outlaw Country”. Just over 30 years later in 2016 a female powerhouse was first formed but instead of a focus on male rebellion, The Highway Women is a project emphasising empowerment and an opportunity for ladies to be supportive of each other.

The Highway Women are much more than just a female vocal group, there is core touring roster of 4 women who were involved in the 2 releases from the band this year but there is a much more extended cast featuring many other female artists with a strong focus on inclusion and highlighting women in country music. The project is managed by Jill Pavel who took on the idea from it’s previous creator to drive it to it’s current direction and got ladies involved that symbolised the ideology and goals of the band.

As a touring band that are collectively recording together as The Highway Women there is a strong East Texas feel as 3 of the 4 members hail from the region where Amanda Pruitt, Drew Haley and Heather Nikole Harper call the region home which is coupled with the enigma of positive energy radiating out of Kristen Kae from Kentucky. The bands manager Jill Pavel put the group together and invited all of the members individually but when we recently hung out with Kristen and Heather they talked of how there is no manufactured feel to the group as they are a total sisterhood that are best friends and described the group as:

The Highway Women is mostly about friendship and sisterhood but we’re majorly about empowering females especially in the music industry as it can be a struggle some times for women to break out in the industry. We just want to be there for all the girls because we really believe in empowering each other, some times in this industry we get pit against each other a little bit but it’s better to give each other love and help each other out. 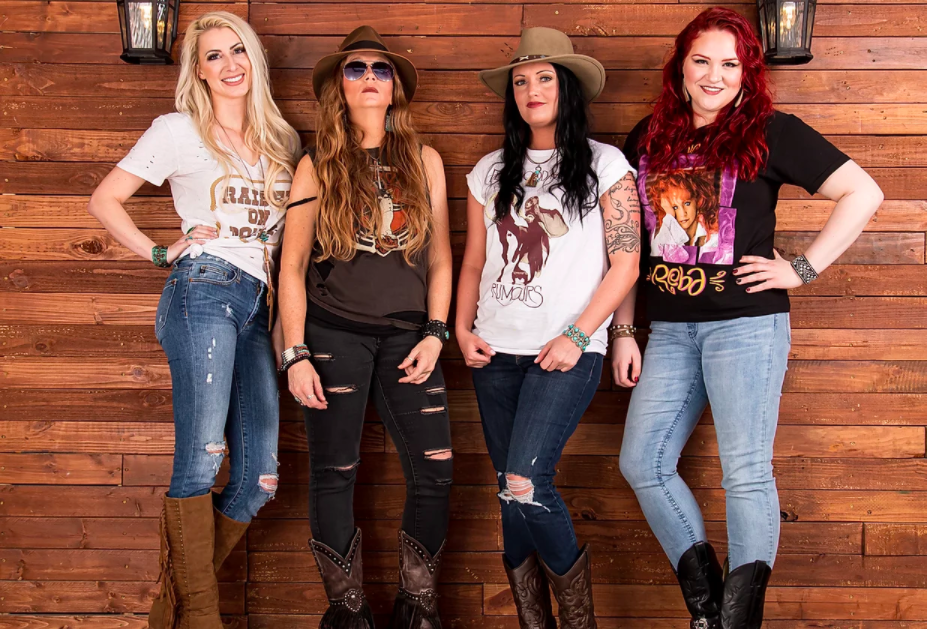 Heather Nikole Harper has been involved for around 3 years where previously she dipped across a variety of genres and influences with particular focus on pop before finding country her inevitable calling being from Mineola in Texas where she has ties to a pair of artists doing pretty well that are very local to her as it is around 30 minutes from both Golden and Lindale which are the hometowns of Kacey Musgraves and Miranda Lambert respectively. East Texas remains her base and where she has been during these uncertain times in the world but would regularly travel back and forward to Nashville. Nashville is now where Kentucky born redhead Kristen Kae can finally call home as she has literally within the last couple of weeks got her first place there:

I’ve kind of said for like 5 years, I haven’t had an address but I’ve been here! I was only like a 2 and a half hour drive away from Nashville so with family and friends that I’d gotten here over time I had the joke I had the key to everyone’s house because I’ve probably stayed there at some point.

Following on from the success of their 2019 release “Stand Up and Fight” which received over 300,000 streams on Spotify and empowering self-worth anthem “God Made Me Right” which came out back in January, The quartet return with another powerful track which showcases their individual prowess and collective beauty in harmony in “Shake The Dust” which was released last week. The track has pure country feels with a real contemporary feel through the electric guitar aspect and through the production brought by Larry Beaird that has a lot of strong sounds that remind me of Miranda Lambert’s “Vice” along with Ashley McBryde’s “A Little Dive Bar In Dahlonega” that is very poignant for the current state of the world.

The song was written by Amanda alongside Davis Corley is a tale of leaving the negative behind and moving on to something better and portraying the message of things will turn out OK if you pick yourself up and “Shake The Dust” off. The girls got this recorded in the studio last year and the accompanying music video (which had been viewed almost 40,000 times in the first 4 days after being released) was shot in February just before Nashville was hit by the tornado and then COVID changing the world.

There’s something about everything happens in the right time because I feel like now, even more than when we were recording this song and excited about what it might be for people to help them through the hard times. I think the message about shaking the dust, going forward and making changes to your life to make things more positive is so important right now where there is so much negativity going round so I’m glad that it worked out that way.

This song couldn’t have come out at a more perfect time, I believe that everything happens for a reason so this song was definitely meant to wait to be out right now in this moment in time!

Releasing new music right now is unprecedented as the industry has changed and the whole world has changed! Radio promo is not like it was, live shows are not happening and fans cannot be engaged with in person. That is not the only thing to change for musicians as the creative process is different, there are different experiences and emotions to inspire songs. Heather explained the effect of COVID in regard to this and how it has impacted future plans:

When COVID happened they literally shut down the entire nation at once in March, where everything was out for a whole month or two which put everything on hold. We’ve been able to Facetime a lot and write songs, stuff like that. That area and time gave us a lot of time to focus on writing songs together, then now we’re all separately opening up at different times so we are looking at a good time when we can get back together in person and start recording which is why we are looking at July or that’s what we are hoping.

Kristen had heard from artists that had been inside the studio that they are due to record in and had become aware of how the process will feel different with unfamiliar precautions brought into place regarding the number of people around, equipment and face coverings so this will be another obvious effect of the pandemic. The pandemic has changed outlooks on life, gratitude and individual growth are positive impacts from the time away from the normal because we have know idea what is next to come in CRAZY 2020!

With regard to the music they are heading back into the studio next month to work on and it will be for the next single as currently the focus has been on writing and getting ready to record. We talked about the potential routes with releasing music either being a collection being brought out together as an EP or an album compared to releasing song stand alone as singles. The plan for The Highway Women project is to keep going with singles where they can individually be focused on and given their full attention then potentially grouping releases together at a later point. Along with discussing the pro’s of both strategies, Heather felt that the singles route is becoming the new normal not just in country but in music as a whole to which Kristen added:

The business has focused more on singles even before this happened but I think it’s going to go this way even more. Even though I love albums and everything, it’s kind of cool because it makes sure every song gets it’s time to have light, to have energy and really talk about it. Even some of the biggest artists may have a song on their album that they really love that doesn’t really see the light of day because everybody was more focused on these three songs as you always have your forerunners.

All of the ladies involved in The Highway Women are also working on their own music alongside the project with both Heather and Kristen being very excited about getting new material out soon. Heather does not have a release date yet but will be releasing her first Christian country song that she has written with her mom whilst Kristen looks to build from her debut single “Just Watch Me” that came out last year with a new single that she has had written for around a year which due to moving house and COVID hasn’t yet been able to put out. She says to expect very sassy because “I am a redhead, it’s kind of what I do!” This is another positive regarding the current situation, as Heather explained:

I feel this has not only given us more time to work on The Highway Women but stuff for our solo careers as well. Kristen is just about ready to head to the studio to record a new song, I have just got through being in the studio recording. It’s pretty cool, it’s kind of the new normal really even though we weren’t expecting this but then again in a way it was a really good thing because we’re having more time to focus on songwriting.

The new single “Shake The Dust” is out now which you can listen to HERE and whilst at present there are no shows still scheduled for The Highway Women as due to the pandemic the tour is on hold, when things start to calm to down a little the best way to see this news first is to keep up to date on their Website Twitter Facebook & Instagram.

Henley Ignites A Unique Memory of Past Love with ‘Alone Tonight’