After 8 consecutive top 10 singles in the United States and as a prelude to their eponymous third studio album, Old Dominion returned to Europe as they continue to grow in popularity on this side of the Atlantic too. Their first trip was back in March 2016 playing the external pop-up stages in the Indigo at the O2 and Brooklyn Bowl (where they were joined on stage by Maren Morris who was a fellow UK first timer and has also since found a rapidly growing fanbase over here) at C2C festival which since has been followed by joining Thomas Rhett on tour in late 2017 and a main stage appearance at the festival 2 years after their debut before fourth and fifth trips headlining their own shows with the London shows being at Shepherds Bush Empire and more recently last week at the Eventim Apollo in Hammersmith.

This shows commitment to the market and obvious growth of their brand in Europe as more people are coming to each tour and wanting a piece of Old Dominion. In advance of their forthcoming album due for release October 25th and prior to their London show we caught up with Matthew, Brad, Trevor, Geoff and Whit to hear more about the new record and touring it initially on this side of the Atlantic.

Matthew on the desire to keep playing in Europe:

It gets bigger and better every time we come, so as long as we are progressing like that, fans are getting more and more then greater in number then we’re gonna keep coming back. It’s following the same model we sort of did in the States with just a grass roots building of fans starting small and hopefully bigger and bigger and bigger.

Matthew on whether there is a difference between European and US audiences:

Yeah definitely, whatever songs you do over here they’re gonna know them so another thing that keeps us coming back is people dig into it but also as people have invested in us I think it gets a little more similar to the US crowds. I think at the beginning they are more willing to give you a shot here, they really wanna listen to this new band that’s come in and we’re gonna give them a shot and once they invest it is very similar to an American audience.

Matthew on building the audience from an early stage and the attention to their entire catalog:

We’ve actually been fortunate enough that our fans really dig into our entire body of work anyway. It took a little longer I think in the States to accrue those fans, where here we came over and played and people were like “We like those guys, we’re digging in!” No matter where we play be it here or back in the States, we know we’ve had people follow us since the beginning and those people mean the world to us that they would invest in us at that level.

Matthew and Geoff on creating a distinct sound and musical style that trends in Nashville have almost followed:

I don’t know if we even think about that, I don’t know how much we feel that we did it. We definitely did “SOMETHING” different! (but it worked)

We certainly do have conversations sometimes with radio people that say there is an “Old Dominion Sound” so we have been successful in creating something.

Trevor on writing with freedom and just looking to put out the best collection of songs fitting for an album rather than trying to fit into a specific box:

For us it’s always been that way and it was an obstacle at the beginning because we didn’t sound like anybody and didn’t sound necessarily country which made it hard for us to get a record deal but we have always operated with that impression of just record the songs that we like and see if people will like them too. But it has gotten easier over time now that we do have a lane, I think especially on the new album we felt the most comfortable that we’ve ever felt to just make songs that we love and not worry about what they sound like or if they fit anything. We just drew from all of our different past influences so I think that is why there is such a wide range of types of songs. 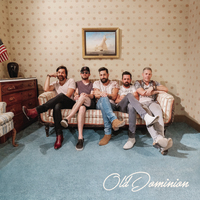 Matthew on the new record having the freedom to cut the variety of songs people will hear:

We’re extremely proud of it and we’re excited to get it out finally, we’ve been sitting on this album for quite a while so we’re ready to get it out. Yeah, it’s pretty rewarding to have that freedom, to feel like we can do something kind of fun or light-hearted like ‘American Style’ and then at the complete other end of the spectrum is this really heavy song (Some People Do) along with everything in-between.

Matthew on the difference between their own shows and stadium shows with Kenny Chesney (as they are due to embark on again in 2020):

It is, especially at first. This will be like the fourth time on tour with him and at first it was drastically different because we were playing all these little clubs and we didn’t have a crew really, we had like 2 people that were helping us and suddenly we found ourselves on like a stadium stage which is really different. Now we’re obviously a little more comfortable with it and won’t feel as drastically different but it is a different animal for sure.

Trevor and Brad on whether they feel there is more flexibility with setlists in the UK than the United States and if it is beneficial to tour a new album with a number of tracks being publicly available before it’s release:

Yeah we have actually, I think we’ve varied them more than we have in the States and it is like a sense of freedom.

So far we’ve been able to play these new songs and crowds are familiar with them so the ones that are out well you get immediate feedback.

Matthew on whether commercial crossover successes many artists are currently experiencing is affecting the way people look to write songs in Nashville:

That’s a good question. I don’t know if it’s affecting, I think one affects the other, affects the other! You know it’s just a circle that at some point someone did something different and it worked then that sort of caught on so now it’s over here swirling but meanwhile on the other side of town there’s someone else that’s doing something completely different and suddenly it will work. It all sort of feeds each other.

Old Dominion’s self titled third album is available everywhere on October 25th which you can pre-order and then listen to HERE and you can find more information an tour dates at www.weareolddominion.com

As the lead to forthcoming new album ‘Canadiana’ Phil...