So Saturday which was day 3 of the festival rolled around and Em went off to get trodden on by goats whilst doing some yoga so me and Shannon woke up and headed back to the Radio Disney Country Stage inside the convention centre. Pretty much our entire day was centred around seeing female artists on stage and all of them we saw were playing to big crowds which is really interesting because it again implies that a lot of people actually want to listen to the girls! Is that so hard for people to believe? Shannon is a big fan of Stephanie Quayle who I hadn’t really seen or heard much of but after some coffee we also managed to catch Rachel Wammack before her who is coming over to the UK later this year as part of the CMA Introducing Nashville Tour with Chris Lane, Danielle Bradbery & TC favourite Travis Denning in October and the resemblance between her and Stephanie is striking! They genuinely must have been separated at birth! UK fans be ready for Rachel when she comes over as she is an absolute firecracker that yall will be ready to fall in love with her voice and personality. 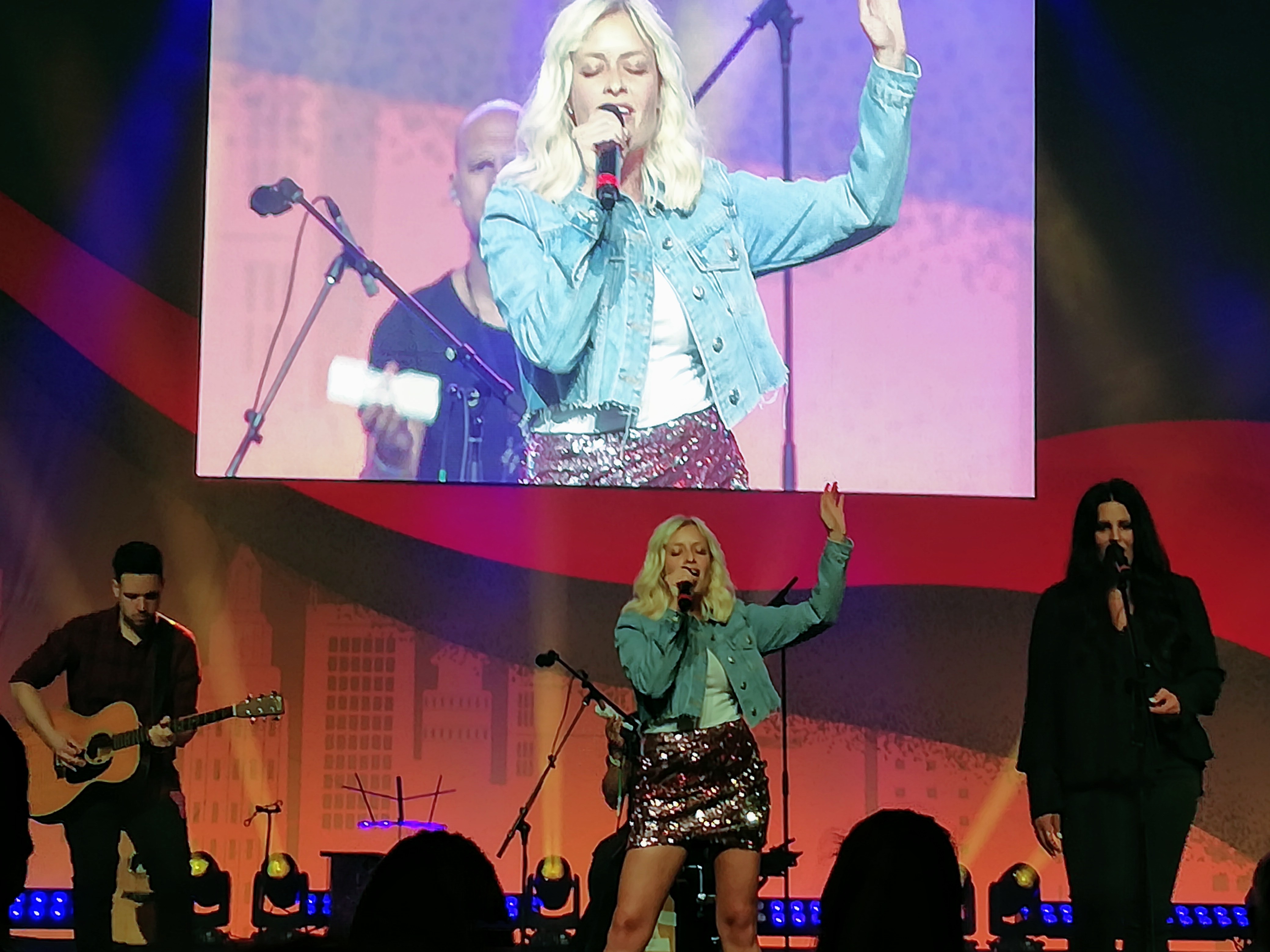 On the subject of girls with far too much energy, we also got our first taste of the absolute bundle of joy that is Savannah Keyes on this stage and after we got to say hi to her a few days later I can reaffirm that I have absolutely no idea what this girl is on but I freaking want some of it! I knew of her music through Kalie Shorr but I was so glad to see her for the first time as her voice is so smooth and she is just so smiley and happy which we adored! Just the sweetest little thing from Salt Lake City in Utah and an infectious person radiating positivity that it is impossible not to love! 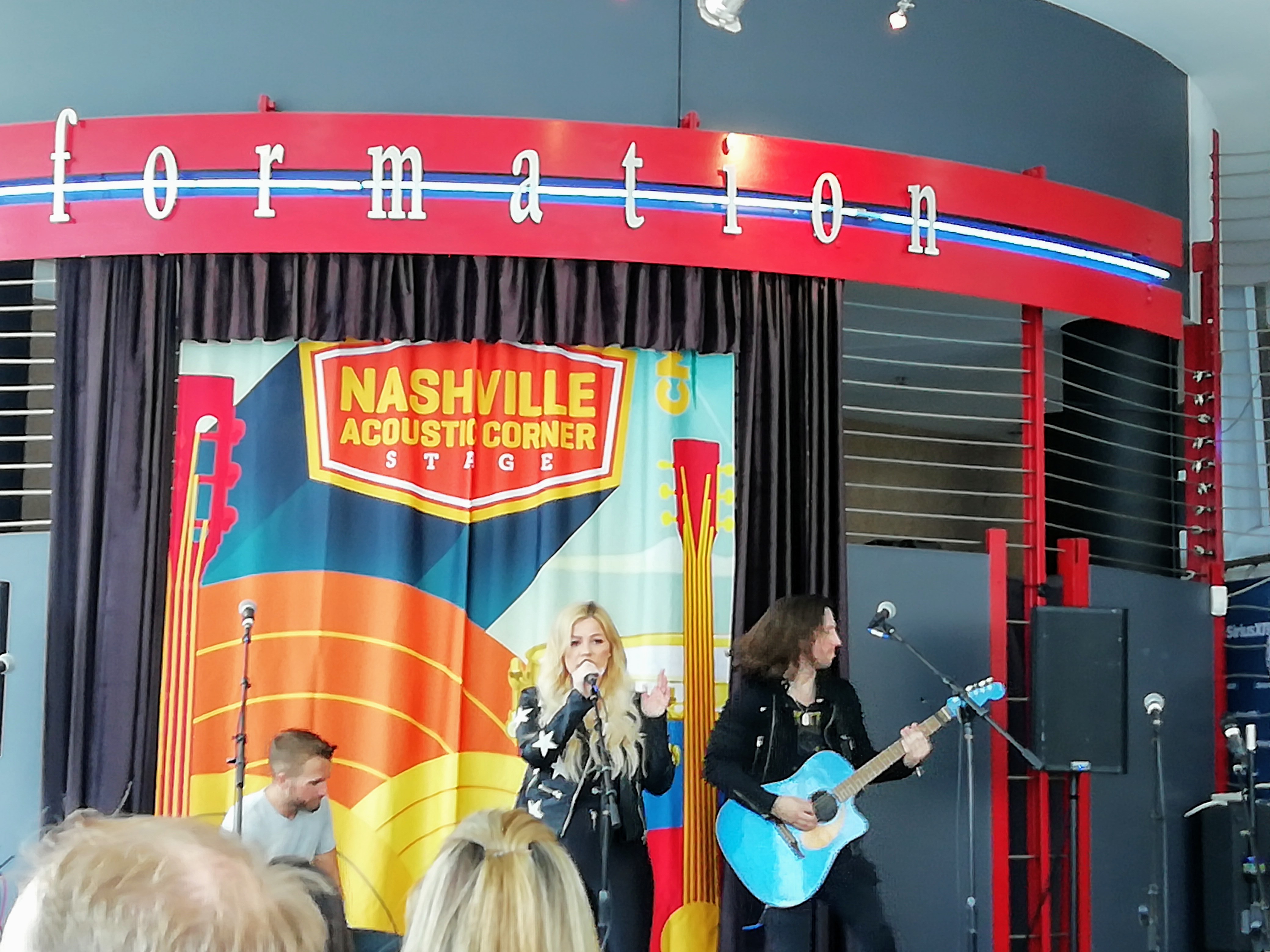 If you have read any of my previous posts I have mentioned how my musical taste is quite diverse and I like what I like, ignoring genre boundaries. One artist I am absolutely freaking obsessed with is Julia Michaels who you should already know is a megastar that featured on the Clean Bandit monster hit “I Miss You” along with “Coming Home” from Keith Urban’s Graffiti U album and her own smash “Issues” but through Julia I had come accross her sister Jaden who is equally as much of a badass! Jaden was playing the Acoustic Corner Stage inside the Bridgestone and seriously girl WOW seriously the most blissful vocal I heard from anyone during my entire trip over to the States! I had heard a few things online but was seriously blown away by Jaden’s voice and girl I am screaming out to hear more. This was one of those beautiful moments that we don’t often get when we cover country music through media, to just be a fan of music and get to say to someone that we love what you do and want to hear more of it! Please, please, please let this girl come and see us in London, but anyone reading this either side of the Atlantic: GET ON THIS TRAIN!!!! 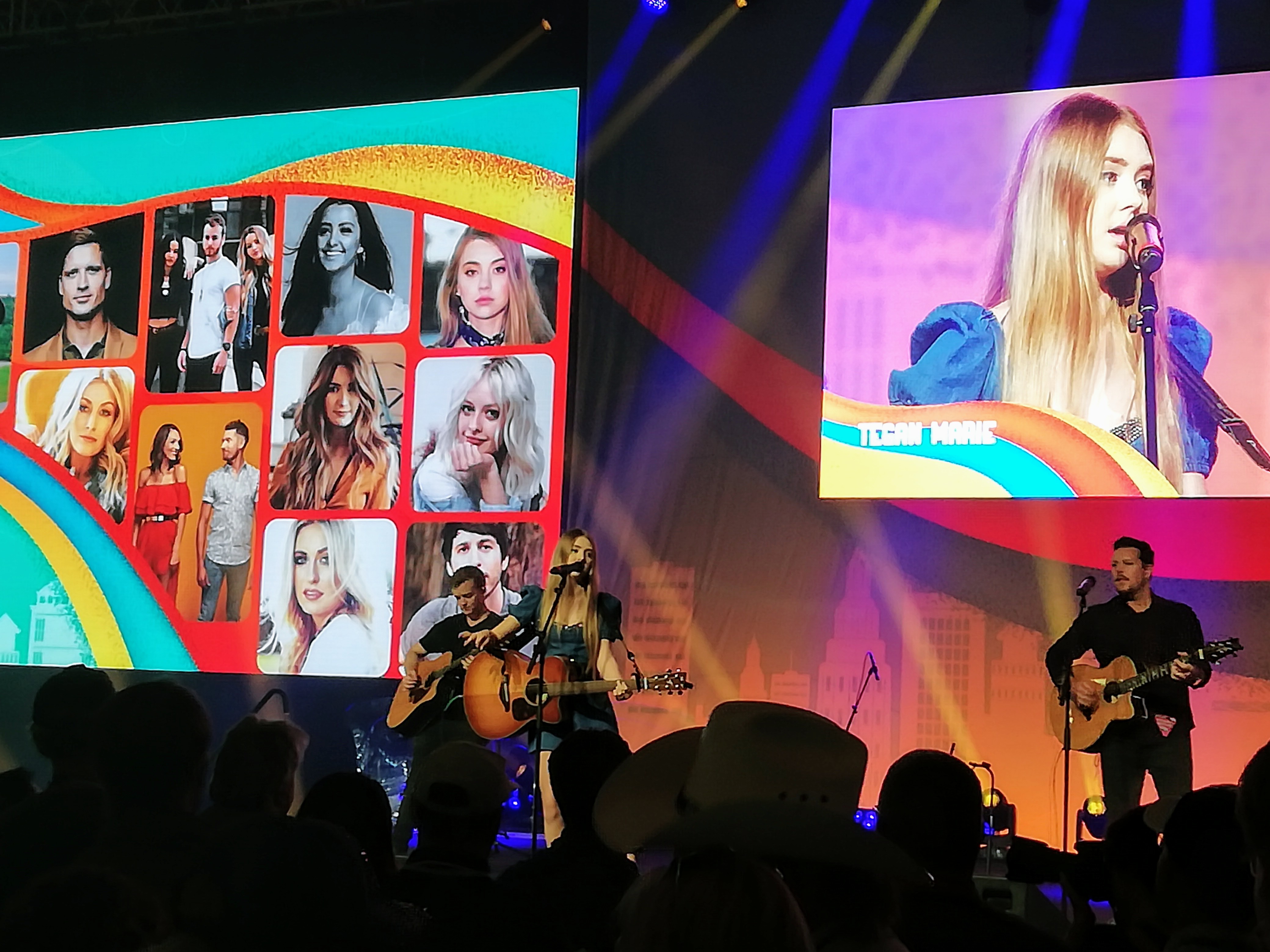 Emma returned after her goat yoga session as we had both discovered Tegan Marie during our visit last year and felt she had something that we really liked! I am such a big fan of the acoustic setting on the Radio Disney Country Stage as I think it better reflects the Nashville you dream about and want to believe in! “I Know How To Make A Boy Cry” is an absolute banger and it was quality to hear it stripped back along with some new songs being played live! This girl is 15! How is that even fair to anyone else right now? She is right up there with the best of them vocally and lyrically but WOW her stage presence is already off the scale! 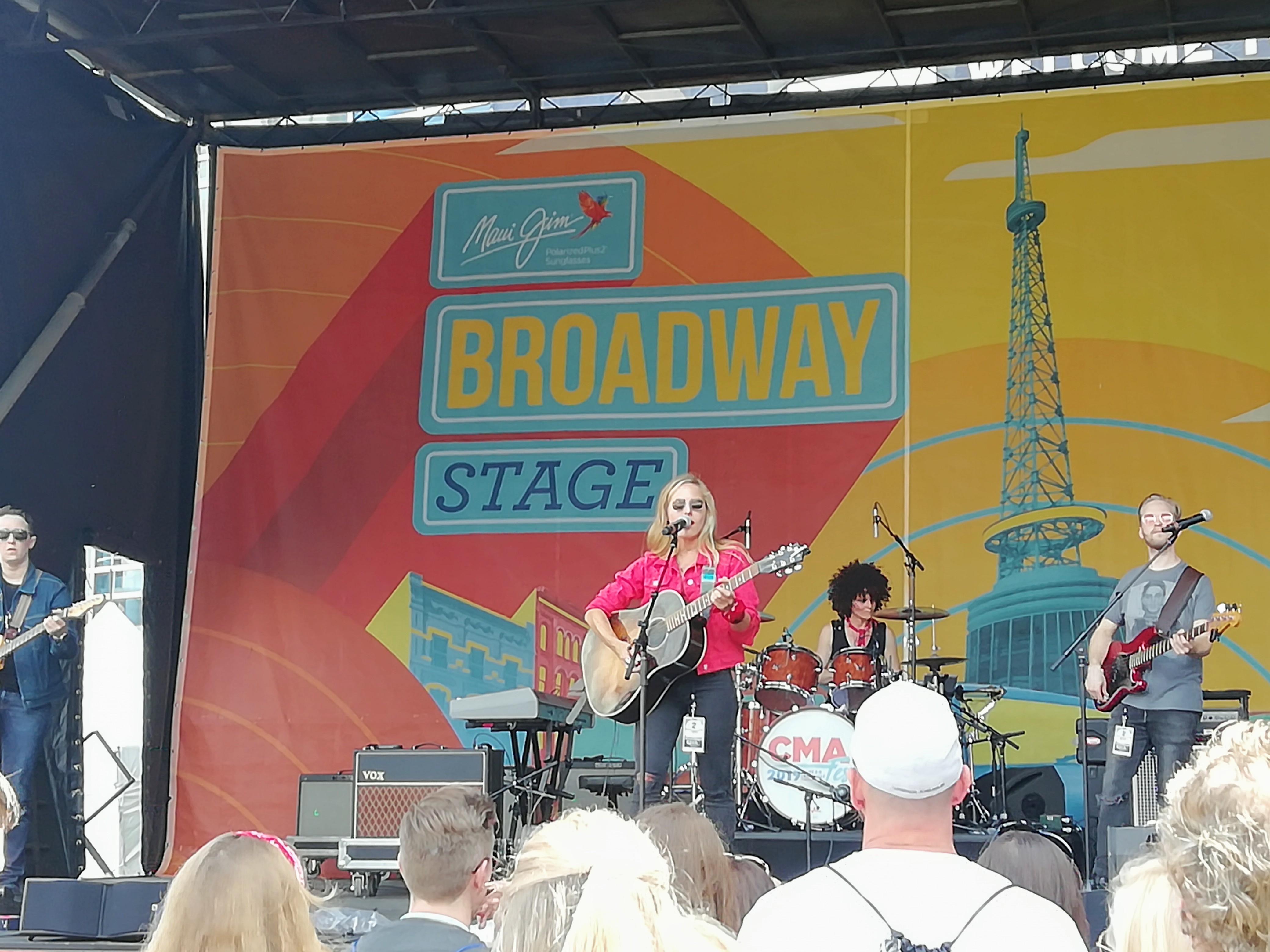 Living in London we get more exposed to artists coming over from Nashville as she does on Australia’s West Coast (get your asses to Perth too! Don’t just play Sydney & Melbourne when you tour Aus) so I tried to take Emma along to see artists I had seen that I knew she would dig! Luckily I was super right about Lauren Jenkins because I thought this girl brought it all when she was playing acoustic at C2C but that full band stuff of the Maui Jim Broadway Stage: I see you gurl! Long Road Festival, just wait to be blown away! No Saint is one of my absolute favourite album’s of this year and even compared to what we saw at the O2 back in March this set was like Holy Shit OFF THE SCALE!!!

We met up with some of my other rowdy gang of Brits for some food at the George Jones before we headed up on the roof of Nashville Underground and almost needed to let rip! I love CMA Fest and all the shenanigans that go down on Broadway but by this point we starting to feel almost burnt out! This whole expression will come to light in a later post but we needed to stop containing and let things out to each other which was really helpful and allowed us to enjoy the rest of the night like we wanted to as Saturday night brought about a performance from an act that we both genuinely had travelled from opposite sides of the world to see for the first time!

Before we headed over the river to the Nissan we got to catch up with our friends Glen Mitchell & SaraBeth in Doc Hollidays on 2nd Avenue before their set as Royal South at Nashville Underground. Being over during CMA Fest does grant you a lot of opportunity to see so many artists but it is really important and gratifying to be able to hang out with and support your mates over there! 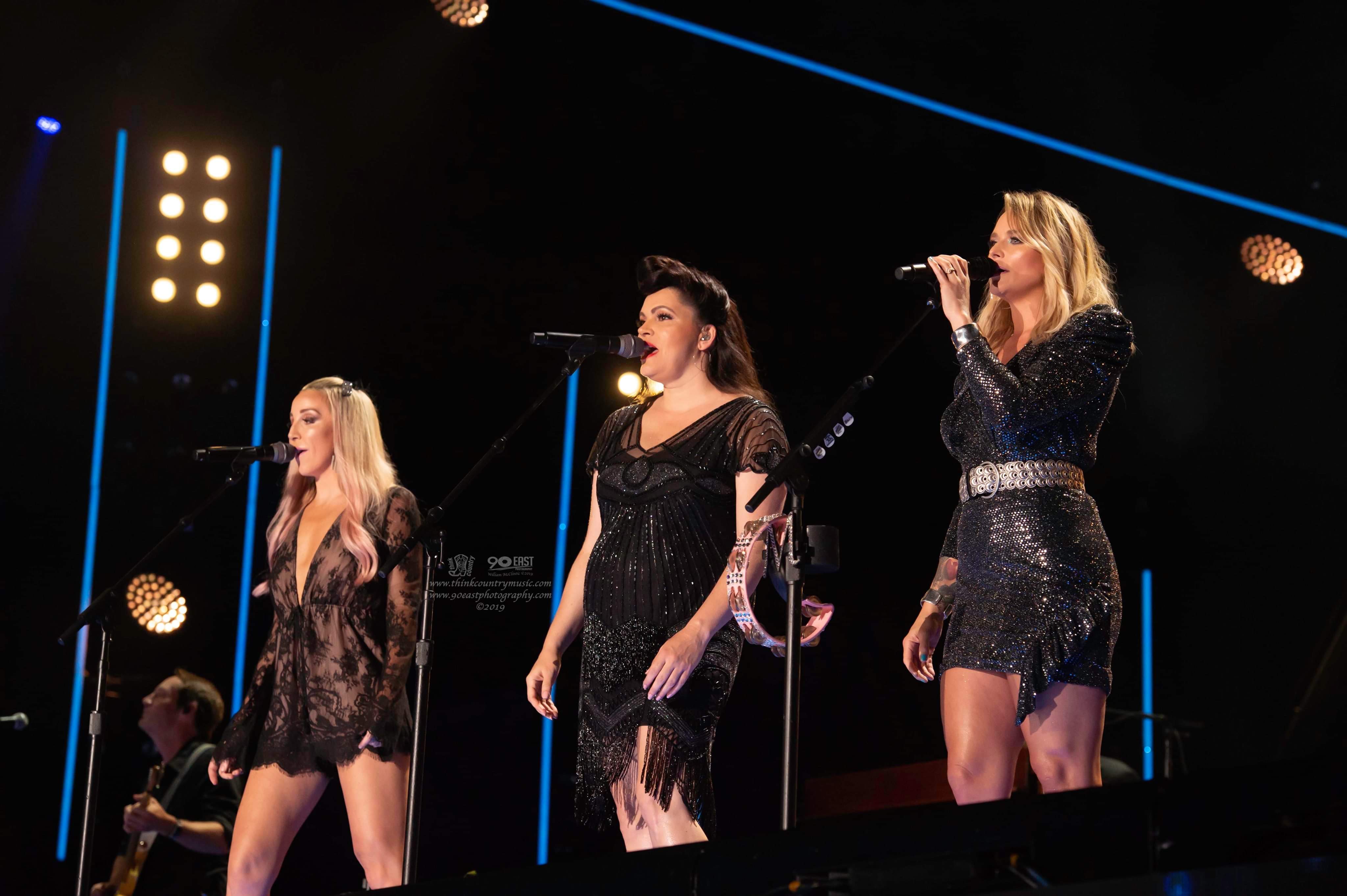 We headed to the Nissan for what was our main event of the trip! I talked about Eric Church in my last post then will go into great lengths in my next post about Maren Morris and how important she is to our friendship but neither of us had ever seen Angaleena Presley, Ashley Monroe & the Queen of country music Miranda Lambert on stage together as the Pistol Annies! When the lineup got announced this was what seriously got the butterflies going! Miranda’s set along with absolute belters from Luke Combs & Dierks Bentley is the reason I am still sounding proper husky a week later! We sang at the top of our lungs and we danced without a care in the world to all three sets! Seeing Tenille Townes come out with Dierks was really special for me as I interviewed her last year and she was so humble then to see her BELONG on that stage was incredible! 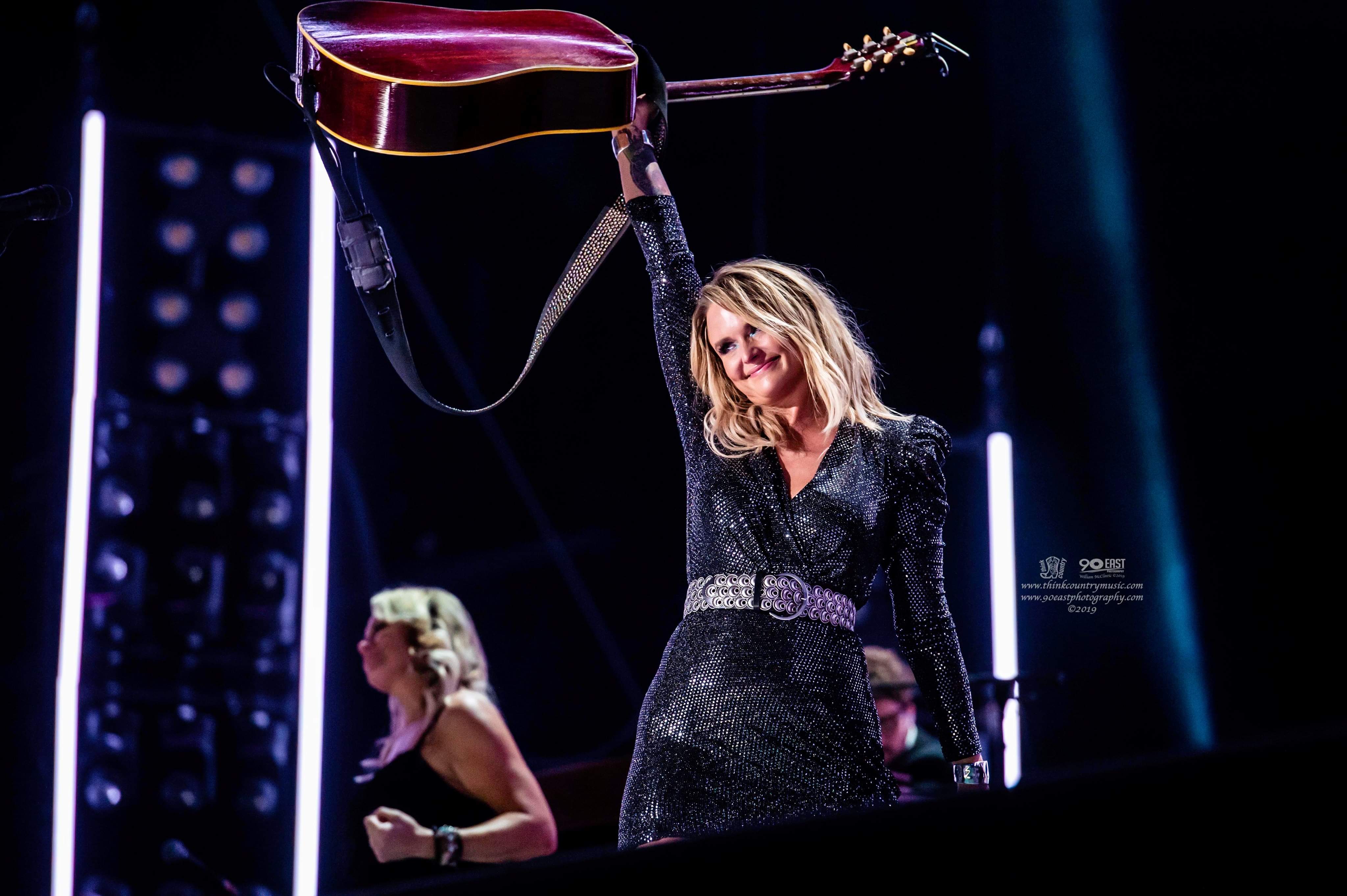 There has been a lot of opinions on Tim McGraw’s set but I cannot offer anything! Firstly I am not really a fan anyway but mainly I had a little “domestic discussion” back home so headed out and didn’t witness it but did join the others for a few more drinks on Broadway (because we are that basic) before a cheeky little Uber Eats for late night chicken nuggets to cease day 3 of the festival! We are ploughing through our trip and getting towards the real fun! The next part is all about miMOOREsa’s and a little lady from Texas named Maren! So same bat time, same bat channel and stick with us for the rest of this ride!