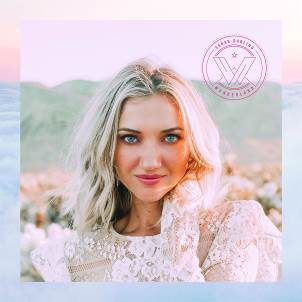 As she prepares for her UK headline tour and performances at C2C Festival, Nashville-based country singer-songwriter Sarah Darling has announced that ‘Wonderland’, her 5th studio album, will be released on June 7th 2019. The news is accompanied by the release of ‘Fire’, an emotionally charged song written by Sarah, with Pete Hammerton (Kylie Minogue, The Shires, James Morrison) and Shelly Poole (Ward Thomas, The Wandering Hearts, Red Sky July).

‘Wonderland’ has come at a pivotal time for Sarah. It’s the album that she needed to create right now, and represents the culmination of a life’s work, “Making ‘Wonderland’ has turned out to be one of the greatest musical adventures I’ve ever had” she explains, “Every song tells my story, and imprints this very special time in my life; when I got to create a country album in the UK! ‘Wonderland’ represents the greatest road trip of my life. Each song is a stop on the map, and important lessons along the way.”

Sarah’s triumphant career has been a story of successes;‘Dream Country’ reaching number 2 the iTunes UK country charts (and over 12 million streams on Apple Music and Spotify across her discography), a TV appearance on ITV, a multitude of her own headline concerts, tours with her signature ‘Night in Nashville’ shows, opening for the chart-topping Ward Thomas, supporting Jamie Lawson on his European tour, performing at three C2C: Country to Country festivals (including C2C: Berlin alongside Keith Urban, Lindsey Ell & Cam) and a number of UK festivals including Black Deer, British Summer Time, Summertyne and Cottingham Folk Festival. Stateside Sarah has played the CMA Festival in Nashville, toured with stadium fillers Carrie Underwood, Kacey Musgraves, Vince Gill and Tim McGraw, and performed at the Grand Ole Opry over 90 times, as well as making appearances on TBS’ CONAN, FOX & Friends, HLN Morning Express with Robin Meade, ABC’s The Bachelor, and more. She was nominated for 2017 “International Artist of The Year” by the British Country Music Awards and returns in March 2019 for her largest UK headline tour yet.

Already a musical mainstay in Nashville, Sarah’s eyes have been set on the UK for a number of years. Through hard graft, years of UK tours, immersing herself in the nation’s country scene and being embraced by the musical and fan communities, her acceptance by UK country music has been quick and effortless. The time spent absorbing the culture and music lead to the early decision to co-write with a host of top British songwriters. Sarah knew this album was destined to be the most significant work of her career and upon listening, it quickly becomes apparent that Sarah’s personality is the cornerstone of her music. A combination of transatlantic influences, both musical and experiential, are laid bare in her lyrics and distinct, contemporary sound that fuses modern pop sensibilities from the UK with her country roots straight out of Nashville.

A host of exceptional writers and producers came on board to collaborate with Sarah on ‘Wonderland’, from both the US and UK.  Working with these songwriters has been a dream for Sarah, who took the challenge of writing with guests in her stride, “I’ve been in England for most of the year co-writing and working with producers. On this project, it’s really about new friends and new ideas. I literally would walk into a co-writing session, and had never met the person before. It’s so incredibly exciting to be finishing up the album, and to say I’ve recorded this in a different country. It’s a true reflection of me, and the current ride I’m on. Not to mention, I have new friends and memories for life. Music is about the connection. I’m so proud to share this trans-Atlantic collaboration. It’s the greatest adventure of my life to date!”

Calling the UK her “second home”, the Nashville based singer set out to embrace everything the UK had to offer,“I hope everyone gets to experience all the magic I had while recording it. I never imagined in a million years I’d be recording an album in the countryside of Wales. I wouldn’t change it for anything!” Whilst the early foundations for the record came together in Nashville with Mark Bright (Rascal Flatts, Carrie Underwood, Keith Urban), Sarah soon relocated to London where she spent much of 2018 working with acclaimed writer/producers Ash Howes (Kylie, Gabriella Aplin), Pete Hammerton , producers MyRiot (London Grammar), and songwriters including Shelly Poole and Jessica Sharman (Ward Thomas).

“The whole concept ‘Wonderland’ was to explore a brand new world artistically.” Continues Sarah,“Because of my connection to the U.K., I thought ‘what better place to bring my Nashville roots to be creative’. I think it’s good as an artist to stretch the boundaries, because you are always growing and that’s how you find new magic and move forward to wonderful, new places.”

‘Fire’, the second track to be released from ‘Wonderland’ is described by Sarah as “a tune that captures an emotional side to being an artist. It’s written after I saw a quote from Vincent Van Gogh about all the fire we have inside. After I read it, I realized that it’s exactly how I felt.”

“There may be a great fire in our soul, yet no one ever comes to warm himself at it, and the passers-by see only a wisp of smoke.”

As she transitions into the busiest time of her life and her elevation to household-name nearly certain, fans expecting ‘Dream Country 2.0’ will be pleasantly surprised to find ‘Wonderland’ is so much more than that. Presented on the grandest scale ever, Sarah Darlingis an artist whose musical songwriting and honesty in her lyrics is unrelenting in its quality.

Sarah is back in UK venues this month, where she will be showcasing ‘Wonderland’ for feverish fans. Speaking about performing in the UK, Sarah said, “I’m so excited to be returning to the UK to share my new music. Doubly excited since many of the tracks on ‘Wonderland’ are “made in the UK” with UK co-writers and producers! Britain has a special place in my heart, and the audiences have always been so warm and welcoming.”