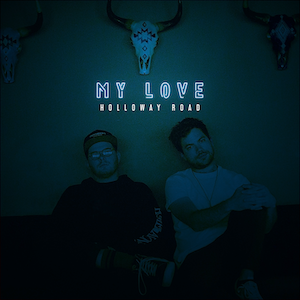 Holloway Road have announced two significant industry moves this month: signing with International Talent Booking for worldwide (ex-US) live representation, and affiliating with SESAC for US collections across their catalogue, to include songs written both for their own projects and recorded by other artists.

Later this week they will play one of their biggest UK shows to date, joining the CMA’s Introducing Nashville tour in Manchester on Weds (16th Oct), opening for Walker Hayes, Danielle Bradbery, Travis Denning and Rachel Wammack at RNCM – limited tickets remain. This extends their involvement with the association’s live events following their first official appearance at CMA Fest in Nashville earlier this year, and follows a summer of shows which has seen them share stages with Lauren Alaina, fellow British duo Ward Thomas, and pop/rock acts including Clean Bandit, Razorlight & Will Young.

Additionally, their new track ‘My Love’ will be released on November 1st 2019, available to stream and download worldwide. Self-produced, and co-written with Greg Bates – whose credits include Chase Rice & William Michael Morgan, as well as a country radio Top Five hit of his own – the song builds on the sound of Holloway Road’s recent standalone singles ‘Lightning’ & ‘Get The Girl’ which total nearly half a million streams to date.