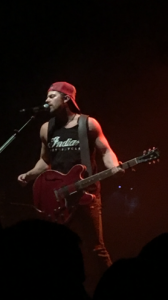 I arrived in Birmingham full of expectation around 5.30 on a cold, Monday afternoon. The rain had been on and off on the journey there and didn’t bode well for the promise of an outside acoustic set, just as Kip had done in both Dublin & Glasgow after the main show.  Ok, hold fire…rewind, I’d only just arrived and was already thinking about the end of the show, such was the buzz surrounding the other nights’ after show antics.  I needed food and maybe a cocktail to sustain me, as I had a feeling it was going to be a long night.

By the time my gig buddy, Mary and I entered the 1,500 capacity O2 Institute, I could hear the soulful voice of Max Milner, ex ‘The Voice’ contestant and Kip’s support act, permeating through the double doors to the main stage.  Speeding up past the minimal supply of T-shirts (how many gig t-shirts does a girl need?) we managed to catch the last song.  I am guilty of thinking, ‘Who?’ when his name was announced as support to Kip but on the strength of the song I heard it was well deserved exposure. He had a great voice but this was mixed with an awkward stage presence. Rather clumsy and in awe of the crowd but laid back at the same time. I really can’t comment on anything artistic as I didn’t see enough but I would not be as dismissive if I was to see him again. I think he is really going to grow as an artist and surprise a lot of people. 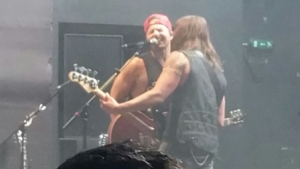 You could feel the electricity in the room as the tension started rising as the expected performance time neared.  Standing to the side of the stage and near the stairs to the smoking area outside, I spied Kip exiting the dressing room (with cap on the right way round for a change), sit on the bottom step, light his cigarette (ah, that raspy voice makes sense now) and cast a quick eye over his shoulder as if to check out the excited crowd waiting for the show.  A few puffs of his cigarette and he was gone, a bashful but focused, “How ya doin’ y’all?” to the few of us that had spotted him. 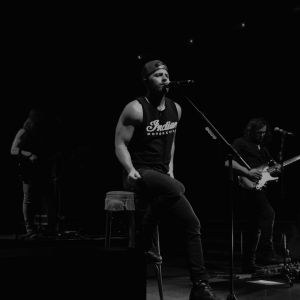 Moments later the anthemic ‘Wild Ones’ kicked off his entrance onto the stage (cap now turned the other way round), signature Indiana Motorcycles vest style t-shirt showing off his now famous muscly arms and all hell broke loose. 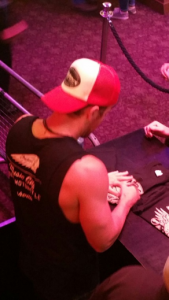 Men and women sang, hollered and cheered as he worked his way through an impressive catalogue of songs, diverse in both tempo and styles.  I wouldn’t class Kip Moore as Bro Country, even though his huge smash hit ‘Something about a Truck’ fits clearly in that category.  I’ve always thought of Kip as a rock star with a bit of country mixed in.  His voice is a mix of Springsteen, Jon Bon Jovi, and John Cougar Mellencamp and at times, I can hear a bit of Kenny Loggins!  You may not agree with me, but just close your eyes and think of the chorus to ‘Danger Zone’ – it could slip into a few of Kip’s rockier numbers. ‘Beer Money’ was a particular highlight with not one person in the room silent. Everyone knew the words to practically every song on both ‘Wild Ones’ & ‘Up All Night’.  His high energy performance slowed down somewhat to include an acoustic section which started with ‘Girl of the Summer’ and ended with an incredible rendition of new song ‘Guitar Man’. 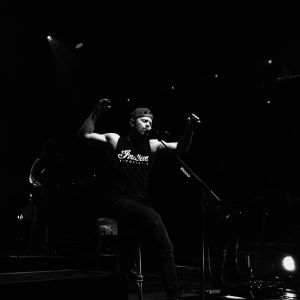 This is Kip’s response to an ex who made him choose between her or his music and whose mother told him that his dreams would get him nowhere.  I felt satisfied, conjuring up a mental picture of that girl’s mother now, surrounded by a room full of dedicated Kip fans, hanging on his every note.  How wrong could she have been? What would she say to ‘Neville’ dancing alongside me enthusiastically singing along to every song, so caught up in the moment he even forgot he was carrying his sister’s handbag? Or Lucy, a cute, lively, Scottish girl I had the pleasure of meeting, who had jumped on the next plane after the gig the night before as she had to see him again & again, so enamoured was she with the country star.  Kip is building a solid, dedicated fan base and this is all down to his unbelievably honest and passionate performances.

The next section was blasted open with ‘Dirt Road’ and followed by ‘Hey Pretty Girl’, ‘Truck’ & ‘Magic’. Pure, back to back bliss, only marred by the persistence of a female heckler during quieter moments, shouting for Kip to take his shirt off. She completely destroyed his final moments of Pretty Girl by heckling again and getting a healthy, united boo from the crowd. However, Kip recovered well and quipped that she should take hers off and meet him round the back of the Institute much to everyone’s delight!  That was fighting talk, true to form and the subject of many of his songs. His encore of That Was Us (his new single) and Faith brought the house down and secured Kip as one of the best live performers in his genre in the minds of everyone in The Institute at that moment.  His passion for his music, his fans and life in general, shines through in the quality of his performance and aptitude to connect with the ordinary man/woman in the street.  I actually think that Kip is best enjoyed live compared to listening to his albums.  This is by no means a criticism but his live performance is full of so much passion and energy that simply cannot be conveyed in a recording. His insistence to stay after the gig and sign every last person’s ticket, CD or whatever else they want signing, has got the great British public eating out of his hand.  You could say that it is just clever PR in a plan to project him to the top but somehow I think he just really enjoys meeting and sharing his time with his fans.

Now at this point I’d usually wrap it up but here comes the piece de resistance for those Kip Moore fans that didn’t have to rush for a train or get home early to let the cat out.  Such was the anticipation for an acoustic after show set, Mary & I and a few dozen others hovered at the entrance until Kip’s photographer/videographer told us to go round the back and they’d be out in a minute.  Excitement was high, he was living up to his reputation – we were going to get a singalong!

Imagine our shock and the moment of realisation when we found out that we were going to be recording a clip for the new video to ‘That Was Us’. Picture about 30/40 Kip Moore fans marching up the backstreet behind the Institute trying to look ‘badass’, being led by 4 men with burning torches, Kip strutting out in front, all singing, “If we got high, we got stoned, If there was a fight, we got it on, If there was a backseat, we made love, that was then and that was us…” Surreal and exhilarating at the same time with Kip mingling with everyone, chatting, laughing and singing.  After doing about 10 takes we wrapped it up with Kip posing for photos for everyone and just basically cementing his title as the most down to earth, genuine country rocker on the planet. 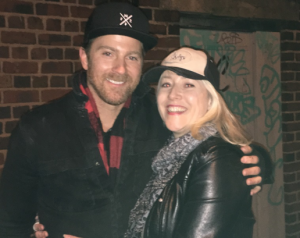 What time does the t-shirt stand re-open?  I need that Kip Moore t-shirt for my collection.