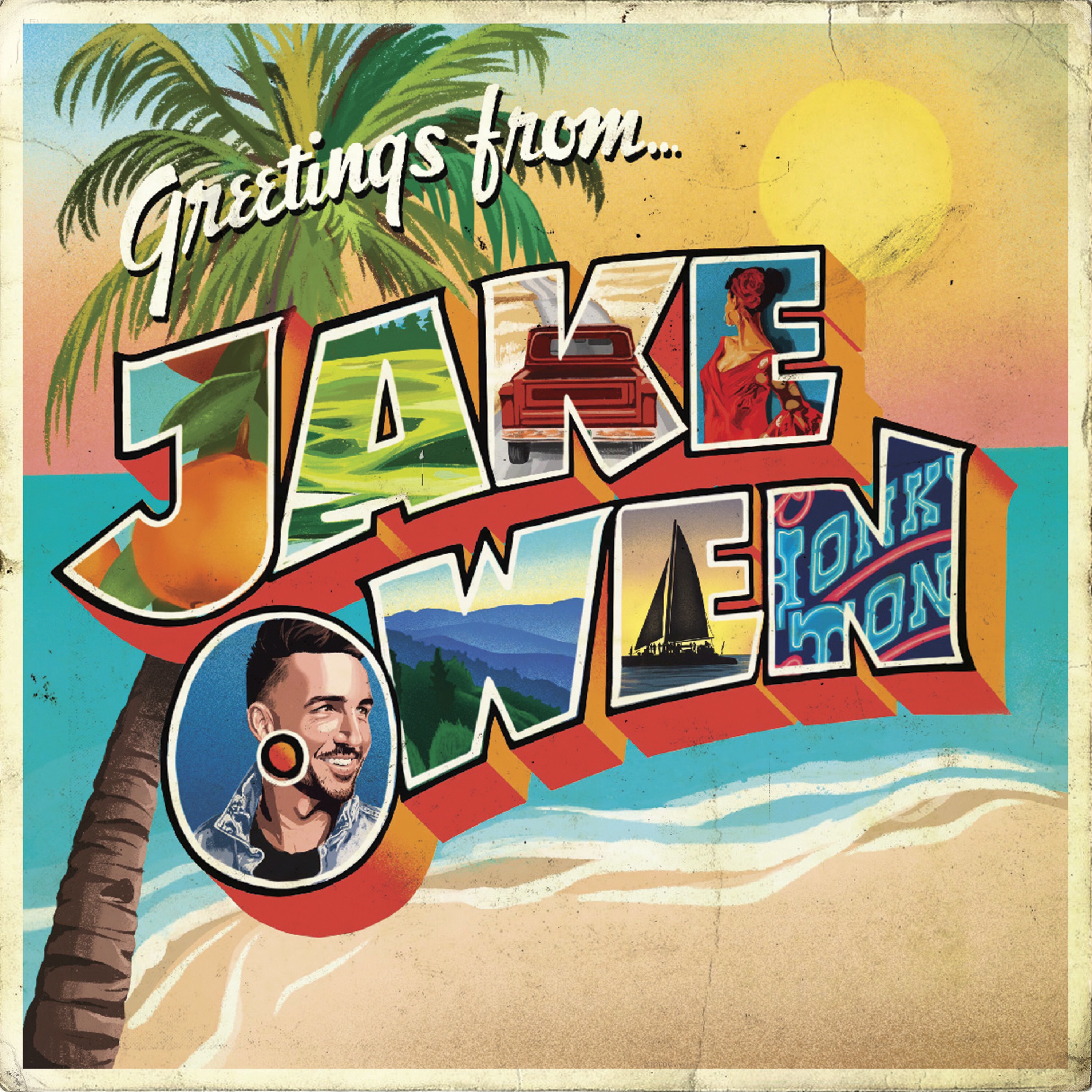 It’s finally here.  Greetings from…Jake, the long-awaited, new album from Jake Owen.  It’s the first full-length, studio album he’s released since signing with Big Loud Records in November of 2017, and it just may have been worth the wait.

The project was produced by Joey Moi, who has worked with Owen in the past on Days of Gold and Barefoot Blue Jean Night, and has been wildly successful with Florida Georgia Line.  He has also worked with many other big-name artists and has racked up several awards for his accomplishments.

I can’t lie.  I’m a Jake Owen fan.  I have been for a long time, so it’s probably a little dangerous for me to be doing this review, but here’s some proof that I’m doing my level best to be fair and unbiased.  At this exact moment, Jake Owen is doing a show at Tootsie’s, which I could be at, but I’m not.  I’m sitting here, listening to his music and writing about it.  Would I like to be there?  Of course, but I committed to doing this, and I think seeing him play would not only muddy my thoughts, it would also cause this review to come in way too late.  How’s that for dedication?  Or pure insanity?

Another true confession from a Jake Owen fan.  Ever since the Days of Gold record, I was a little confused.  Sure, I bought the other records, American Love (RCA Nashville), released in 2016 and even the single, “Real Life”, which was written by four all-star writers (Ashley Gorley, Josh Osborne, Shane McAnally, Ross Copperman), but as a true Jake Owen fan, I was wondering if he had kind of lost his way.  I thought American Love had some fairly decent songs, but something was amiss.  I chalked it up to Owen going through his “experimental phase”.  Many of my very favorite artists over the years have had one of those, why not him too?  I was sure he’d be back.  I hoped anyway.

Then the news came out that Owen had jumped labels.  His longtime relationship with RCA came to an end in 2017 and he hopped on board with Big Loud Records.  The label had only been founded in 2015 by Joey Moi (see above) and songwriter, Craig Wiseman, but perhaps that was exactly what Owen needed.  It was a waiting game for his fans.  Whatever anyone else thought about Owen’s musical time period after Days of Gold, for me, the Day of Redemption has arrived.

Greetings from…Jake has already seen success with two singles.  The first, “I Was Jack (You Were Diane)”, co-written by Tommy Cecil, Craig Wiseman, David Ray, Jody Stevens and John Mellencamp, was released in March of 2018 digitally, and hit number one on the Billboard Country Airplay Chart.  The second, “Down to the Honkytonk” (Shane McAnally, Luke Laird, Rodney Clawson), crawled all the way up to number ten on that same chart, and despite the fact that it never made the number one spot, it remains a huge fan favorite and will no doubt be on Owen’s set lists for years to come.  These two songs are so familiar already, I’ve chosen to omit them from my review, even though I count “I Was Jack (You Were Diane)” as a personal favorite, thanks to the cleverly written lyrics.

The album art looks like the typical postcard.  You remember those things you used to buy at souvenir shops when you went on vacation?  You used to write on them with actual ink and say things like “Having fun!  Wish you were here!” You’d slap a stamp on them and put them in a mailbox, and if you were lucky, the recipient would get it before you arrived back home.  If you’re under a certain age, you probably have little to no concept of what that’s all about, but there.  History lesson over.  The postcard on the album depicts all the joys of Jake Owen’s home state of Florida.  Palm trees, beaches, you know, Florida things.  It’s bright, it’s colorful and even before I listened to anything that was inside, I had a happily strange feeling that the Jake Owen I thought checked out of his musical zone a while ago just might have checked back in.

“Ain’t Here to Talk” (Brett Tyler, Jesse Frasure, Michael Hardy) is one of those songs that I love, because it takes you right into a country bar, fast-pitching all kinds of elements of what goes on inside one at the listener, but the basic premise is some lovely young girl is just sitting there itching to dance and nobody’s asked her yet.  Enter a knight in shining armor (or the most gallant of the cowboys anyway) to rescue her before one of those other smooth talkers tries to move in.  This might be a little early on a 14-track album to say that Owen is sounding pretty darned country again, but the twang seems to back and everything.

Another song that should take the devout Owen fans back to his older stuff is “Catch a Cold One” (Jon Nite, Josh Thompson, Justin Ebach).  I’m not sure whether to call this a laid-back summer anthem or a song worthy of a good cry, or both.  I guess it depends who you are.  It’s definitely “hang out at the lake” music and the lyrics are full of sound advice without being the least bit preachy, but tucked in there, ever-so-mildly, is that one thing that’ll get you.  If you’re one of those really casual listeners, you might even miss it.  Don’t miss it.

Try and list a few public figures that people either love or hate, just off the top of your head.  I bet I could guess some of the ones you’re thinking about.  Well, I sure wish I could meet the guy I’m about to mention.  He absolutely lands on my list.  He’s Kid Rock and no matter what your opinion of him, he’s not going anywhere.  In fact, if you’re looking for him, you can find him right on Greetings from…Jake on the song, “Grass is Always Greener” (Alysa Vanderheym, Ben Burgess, Jaren Johnston, Robert Ritchie) and if you’re paying close attention to those songwriters, you may have noticed that Robert Ritchie IS Kid Rock.

What can I say?  I like Kid Rock.  I don’t know him personally, but I like his public persona and I like this song.  These writers, including Jaren Johnston of The Cadillac Three, who is one of the most gifted Nashville songwriters of all, completely nailed it here.  The play on words is outstanding.  It will drive people absolutely crazy!  If that isn’t a sign of getting it right, then I quit.

“We’re always gonna want a little more than we got

Ride-riding that stock market rocket with holes in your pocket

Well, then you’re missing the point

Grass is always greener in somebody else’s joint”

Never once, do these guys mention drugs (whether legal or illegal, depending on where you happen to live) in the song.  Euphemisms, analogies, double-meanings, whatever you care to call the different techniques songwriters use to develop catchy lyrics, none of them are new.  It just so happens that we’re in a largely transitional time in our country right now.  Laws are being passed and states are making things legal that never were before.  Before anyone takes this song way too seriously, let’s call it for what it is, an intelligent use of the English language, set to music.  It’s fun and it’s true.  We’re all probably at least a little bit guilty of wishing we had something more.  Maybe we all need to stop worrying about the grass in the next guy’s joint and be happy with our own.

Another of my picks for best on this project is a number called, “River of Time” (Ben Hayslip, Dallas Davidson, Marv Green).  Not the least bit flashy, and as much as I’d love to see this become a single, I’m sure it won’t, which is probably the reason I love it.  Sometimes the deepest cuts have the most value to me.  It’s sweet and simple, but any song that can so gently and pleasantly make you face your own mortality is really wonderful, isn’t it?  Don’t skip over it.

I enjoyed every track, but I would be here forever if I tried to talk about all 14 of them, so I hit my highlights.  I saved my very favorite for last though.  It’s the second-to-last song on the album, and it’s called, “Mexico In Our Minds” (Ashley Gorley, Chris DeStefano, Jaren Johnston).  Let’s just say, that’s a trifecta of hit songwriters right there, and as far as I’m concerned, this song seems to have been written especially for Owen.  His voice fits like a glove with everything, the melody, the lyrics, the feeling.  Out of everything on this record, here’s where Jake Owen shines.

The writers did a spectacular job in taking some humble location in Tennessee and transforming it into an idyllic Mexican paradise.  Only the best and the brightest know how to do that in precisely the right way.  Owen sings those lyrics as if he believes them to be true.  Highway noise really IS the ocean.  It isn’t pretend at that moment, his vocals, along with great studio instrumentation combine to make it convincing.  I can’t give anymore than that away.  I love this song way too much to just put it all on the table.  Owen does party songs and beach songs better than just about anybody, but this is all about taking the listener to another place for a few minutes.  Want to go to Mexico?  It won’t cost you more than the cost of this album.  Stellar job on this song.

How do I close this?  The only way I know how, I suppose.  I’m taking a risk, but I’ll say this is Owen’s best album yet, overall.  I’ll admit, I’m still stuck on the Days of Gold record, but I think he was riding high on so many things back then, and he had a momentum going, and that album was just part of that wave.  Then, things got weird, at least from this fan’s point of view, but don’t things get weird for all of us?  I feel like Greetings from…Jake is a strange, yet profound, combination of Owen coming back to his roots and reinventing himself all at the same time.  It’s the coolest thing ever.  I bet it’s good to be Jake Owen right now. 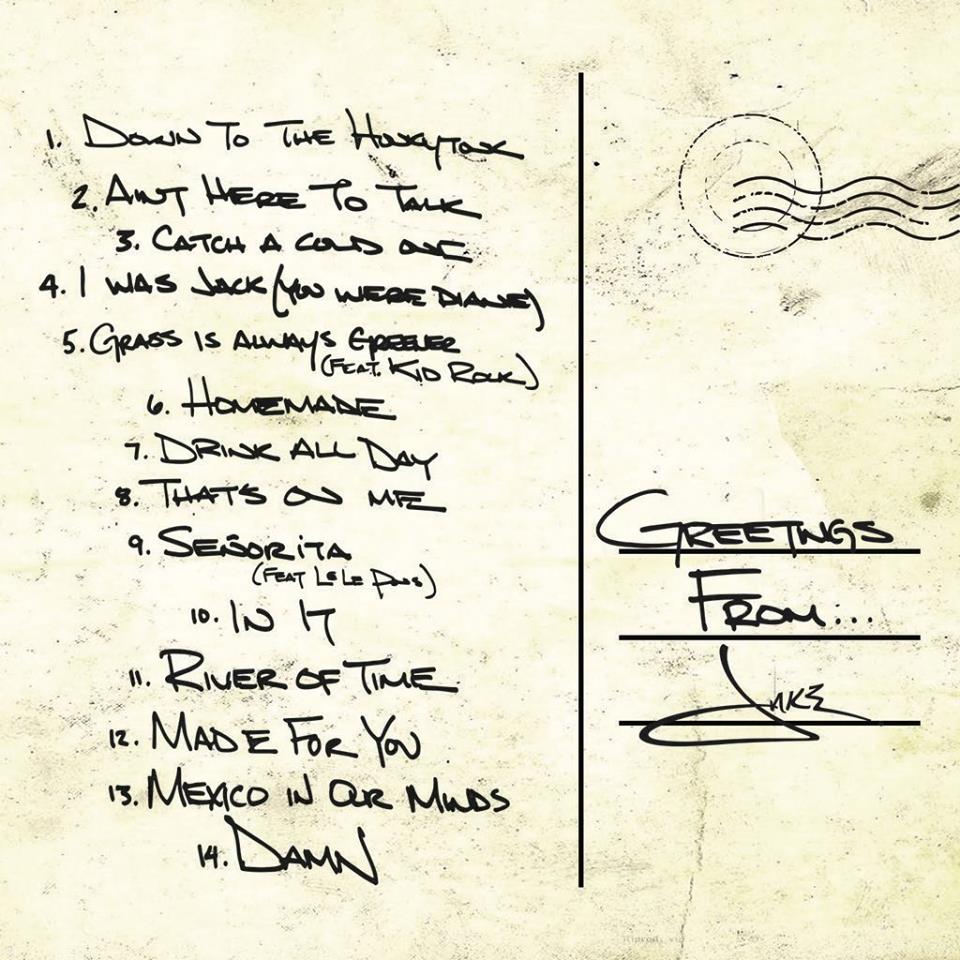 Jake Owen can be found: