A very welcome home to their roots. 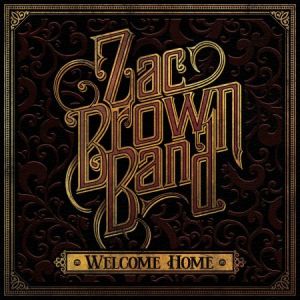 There has been so much buzz and anticipation surrounding the release of Zac Brown Band’s fifth studio album ‘Welcome Home’, starting with the release of first single ‘My Old Man’ back in February 2017.  They promised to deliver an album in the vein of The Foundation – their first major studio album back in 2008, and if this sneak peek was a precursor of what to expect next, then they are staying true to their Southern roots. The Zac Brown Band have pushed their musical boundaries to the very limits over the years, culminating in the eclectic and ‘Marmite-esque’ Jekyll & Hyde in 2015.

I will admit to absolutely hating Beautiful Drug the first time I heard it, lamenting their choice of huge, over-production and disco beats.  However, having played that album to death, it’s probably one of my favourite tracks to hear performed live.  I was also a huge fan of Heavy is the Head recorded with the recently passed Chris Cornell, one of the founding fathers of the grunge movement. This was a welcome addition to that album being a rock fan, although I know that other ZBB fans did not feel the same.

With the formation of Zac Brown’s side project ‘Sir Rosevelt’, he has found an outlet for his experimental side and the band have been able to concentrate on the return to their humble roots.  This ten track album is a sentimental tribute to family, relationships and the things that really matter in life.

Roots is the first track on the album and from the opening strains with the stripped back acoustic sound of the violin, soft guitar and piano, the old Zac Brown Band that I fell in love with from The Foundation days is well and truly back. Traditional melodies and straight forward, heartfelt lyrics abound, “My Roots always keep my grounded, Roots remind me where I’m from, even when I’m a thousand miles away from my Roots, I’m home…”

Real Thing is a blinder of a track, full of wonderful melody, well-built verses and a great chorus.  It has a familiar sound – one that is instantly memorable and will stand the test of time if ever it is chosen to endorse a product, most probably a beverage of some sort.

The melodies keep flooding in – Long Haul is the next track, featuring a more simple Jimmy De Martini fiddle but just as poignant to the relationship theme of the song in which the title speaks for itself, ‘I’m in it for the Long Haul’. 2 Places at 1 Time is a testament to the committed work ethic of the band, following a gruelling schedule entertaining their fans and just longing to be at home with their family. Family Table is a wonderful acknowledgement of the simple things that bind a family together, spending time together over the dinner table – ‘making memories round this 9ft pine’.  I admit it; I have serious table envy at this point remembering everyone at my house at Christmas, crammed around the table, not being able to move because the table leg is pressed up against them!

My Old Man is a sentimental tribute to fatherhood.  Not knowing my real dad properly until his dying days, this is a real gut-wrencher of a song – a reminder of what a relationship should be like between a father and child. When I looked around at C2C and saw the emotion falling as tears down people’s faces, I felt like I’d been punched in stomach.  That is the true power of a brilliant songwriter.  Beautiful fingerpicked guitar as accompaniment – this song needs no frills but deserves a plethora of adoration.

It’s with relief that I welcome the next track, Start Over. It wouldn’t be a Zac Brown Band album without a beach vibe track with the promise of a cold Corona.  To tell the truth I could do with something stronger, but I’ll take the cold beer.  A great party song, but with a serious message to couples in long term relationships – ‘take time to fall in love again’.

Your Majesty is a poppier track, a great love song that packs a musical punch and actually benefits from more production than the other songs. Trying to Drive is a real treat to listen to – wonderful melodies and fantastic, well matched harmonies with Aslyn from ‘Pass the Jar’.  Kacey Musgroves features in the last song on the album All the Best which in my opinion is the only song on the album that I find a little bit flat.  Shame, as it’s the closer, but to adapt a famous Meatloaf lyric, I won’t be sad cause 9 out of 10’s not bad!

This album is a first class return to who the Zac Brown Band were and are still. The wealth of experience they all have to draw on has crafted the most personal music of their career.  3 times Grammy Award winners?  I feel a 4th Grammy may well be on the cards, and well deserved it would be too.