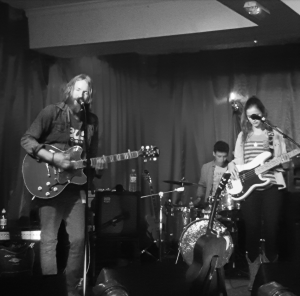 “William The Conqueror is not what you might expect” is the tagline on the band’s Facebook page, so i was intrigued when i headed to their gig at The Islington on Thursday night.

The three piece stunned with a 40 minute set that was a mix of gritty guitar, with a true Americana mix of blues, folk and rock vibes. Their debut EP was released back in February, and ‘Tend To The Thorns’ is certainly a stand out song, which was included in the set. ‘Did You Wrong’ was another memorable song.

They had travelled from Cornwall to be at this gig, but there is still a lot about them that is shrouded with mystery. Despite the Americana and folk label, someone suggested they wouldn’t be out of place opening for Nashville band Kings of Leon and i completely agree!

I’m not actually sure what i expected, but i was seriously impressed. Go give their music and listen, and be sure to look out for any upcoming gigs!