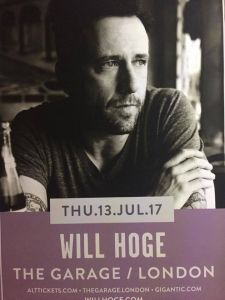 Last time I saw Will Hoge in London he played at the stunningly beautiful St Pancras Old Church, this time round the venue couldn’t have been more different and anyone who’s witnessed the ” silver makeover” of Highbury ‘s The Garage will know what I mean!!

Even Will felt the need to comment on the numerous disco balls suspended from its ceiling ( ” I have to tell you, this show nearly didn’t happen, I’m a bit of a diva and refuse to play anywhere with less than 22 disco balls and when I got here earlier there were only 4!) but decor aside ( guess for a different genre it would be perfect, where’s Kylie Minogue when you need her?) I must say the sound there was fantastic throughout the evening, and what a great evening it was!

And bonus for me was to find Austin based David Ramirez on stage as I arrived, added to the line up a couple of days ago apparently. A fan of his after seeing him open for Angaleena Presley at Bush Hall in the past, he once again impressed with his beautiful and thought provoking lyrics delivered with such emotion ( whether tenderly or with vitriol depending on the songs’ needs! ) not to mention a voice that sends shivers down my spine. Sadly only 50 or so people were there for this early set, I’ll look forwards to his headline tour here next year to promote his new album which is due for release this Autumn.

Hans Chew, the billed support artist, was someone new to me ( although apparently he’s toured here on several previous occasions). This New York resident/Chattanooga native is about to return to Tennessee, having inherited a farm there! He started his set with a couple of songs on guitar and harmonica but it was when he switched to keys ( such a versatile artist!) he really seemed to come to life with incredible honky tonk/jazz/blues playing that got the ever increasing audience moving down to the front in awe. No wonder he has been likened to Jerry Lee Lewis and Little Richard! Hopefully his forthcoming release “ Open Sea” will have him return here.

So much talent and the main man hadn’t even made an appearance yet!! When he did ( dressed all in black, Johnny Cash would have approved!) he was, like last time I saw him, flying solo for his 90 minute set…..partly no doubt as its not a cheap proposition bringing musicians over to tour, partly as his songs work equally well stripped back as with a full band, and partly as he explained that he “ got rid” of ( hopefully not in a permanent way!) his band last year when he was at a particularly low point not knowing where he was going musically and not feeling good about writing.

Touring solo for a while helped a bit, but it was hearing his son’s band rehearsing in their garage and that made him remember what he felt as teen and why he wanted to make music in the first place……and this inspired “ Seventeen”, one of the tracks from his new album “ Anchor” ( release date Aug 11th) that were previewed in the set. Here’s Will explaining things much better than I can and playing the song live a few months ago back in the States….

From that clip you may rightfully gather that Will is not only a talented musician but also a hugely funny raconteur, and the songs he played ( both new and old) were interspersed with hilarious anecdotes making for a really entertaining set in every way! Too numerous to mention them all, I’ll just include one more relating to what he said are the many ways success can be judged…… one way he felt he’d achieved a certain amount of success in his career was when he could answer unknown numbers on his phone as by then he knew they weren’t calls from debt collectors! Continuing on this theme, one such call was from Charles Kelley who’d been listening to his music and wanted to ask if Lady Antebellum could record one of his songs!! Trying to keep his cool he pretended to ponder a short while before of course agreeing to the proposition, and he actually ended up played harmonica on the track ( “ Better Off Now” , from the 2013 album “ Golden”).

Musically, as well as previewing several more new tracks ( I particularly liked the forthcoming single, “ Young As We Will Ever Be” a perfect upbeat Summer number which he has said is about being bold enough to chase the things you want while still enjoying what you have, and the love song “ Little Bit of Rust” which is a duet with Sheryl Crow on the album…..joking again, Will said how he loved to support up and coming artists and if she was here tonight he’d get her up on stage

of course his pretty extensive back catalogue was well represented. A lot of the audience were obviously big fans, singing along with songs such as “ Growing Up Around Here” “ Southern Man” and “ Middle of America”. He even strayed from the set list to play, “ Goddam California” a request from birthday boy “ Ben “ in the audience ( “ I apologise to those of you with a babysitter at home but that really polite guy back there asked for this” ) . Switching between guitar and keys, harmonica always at the ready, it amazed me how he could be telling one of his hilarious stories one minute before performing one of his poignant heart wrenchers such as Goodnight/Goodbye, one of my personal favourites of his which I also had the pleasure of hearing co-writer Michael Logen perform recently. While the majority of Will’s compositions tackle pretty serious, intense subject matters, his sense of humour definitely ones through in “ Jesus Came to Tennessee”, but even this entertaining write has a message in it, that children’s acceptance of each other, whatever their colour, race or religion can teach adults a lot ……sonically it reminds me a lot of Dylan’s “ Subterranean Homesick Blues”…see if you agree!

This was definitely a night to relish, I’m looking forwards to more shows over here from all three artists when they return to promote their new albums ……Will is now heading back to Nashville to “ shoot one of those fancy music videos” for the new single, I can’t help think that there’ll be a lot of joking going on behind the scenes which sadly won’t make it to the finished edit!!