Whiskey Myers recent UK tour was everything I hoped and more. To sum it up succinctly, their brand of gutsy Southern country-rock kicked the yeehaw right out of country music the night I saw them at the O2 Institute in Birmingham.  Loud but gloriously harmonic, full of great guitar riffs, incredible vocals, tight musicianship and a drummer that knocked the devil out of a cowbell to rapturous applause…

I got to have a chat on the WM tour bus before their Birmingham show with frontman Cody Cannon. If you haven’t seen Cody before hearing him, the image of a gnarly old rocker swigging out of a Jack Daniels bottle fits with his powerful Texan vocals, but I’m met with an unassuming, good-looking young man, surrounded by water bottles and a large bowl of fresh fruit gracing the side of the kitchenette…. 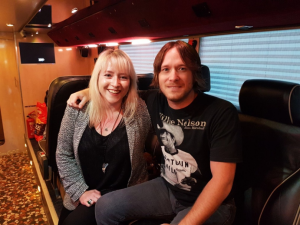 TC: Hi Cody, brilliant to meet you – I’m really pleased I made your show this time as last year I was stuck on the M6 in traffic –

TC: Yes, with you! We actually tweeted each other that we weren’t going to make it to the show, but I think in the end we were on the M6 for 7 hours, you for slightly longer?

Cody: Yeah, we were on there for, like 8, or something, it was a lot…we didn’t make the show.

TC: Well, we made it this time! So last year you were supporting The Cadillac Three and it must have gone well as you’re back.  How did you find the UK last year?

Cody: Yeah, it was good. Everything was cool.  We did that first one with the Cadillac and it was kinda’ the game plan. Then we played a couple of festivals and we came back in December and did our first headlining tour and it was good. I think it was pretty much sold out so we decided to come back one more time this year.

TC: Fantastic for us! How did you find the UK audiences?

Cody: It was great man, they’re great, they dig it! They are very passionate about the music so it’s good.

TC: Yes, you find that in the UK the fans will sing along to every song on the album, not just the hit singles.

TC: Yes, our accent (laughing) – can you do an English accent?

Cody: It was good, it was raining at Download. It was amazing to see all those people, just jammin’ out, standing in the rain!

TC: Absolutely, we love it, we are just so…

TC: Of course, it rains all the time here! So you and your band are all from Texas?

Cody: Everybody apart from our Keys player, he’s not here – he’s flying in on Tuesday, he had a wedding to attend! He’s from Oklahoma but the rest of us are from East Texas.

TC: How did you all meet?

Cody: Most of us all grew up together, so we’re just all from the same area, we’ve all just known each other our whole lives.

TC: Are you still living in Texas?

TC: My cousin lives in Austin, Texas and she visited me recently. She said it took a shorter time to travel and come to see me in England than it does to drive across the whole state of Texas! It’s hard to believe that, is it really that big?

Cody: Yes! It’s like…we live in East Texas by Louisiana and to get to El Paso it’s like, 12 or 13 hours or something like that. We’re probably about 4 or 5 hours north east of Austin.

TC: Texas has a great music culture, but here in England if you mention country/southern rock then Nashville is the first place that springs to mind. Have you got any plans to move Nashville way?

Cody: No, no, I just moved back home. We lived in Tyler which is about an hour or so from where we’re from. I just moved home, bought land, built a house, so I’m staying…yeah, for the rest of my life.

TC: So tell me about your band name.  I know that Whiskey Myers wasn’t the original band name. How did you come up with the name?

TC: What? Like in dog fighting but with chickens?!

Cody: Yeah, chickens, but with Roosters (Cody has a mischievous glint in his eye). There’s lots of different ways they say the name come up, but that’s the one I say. Big chickens, like on Family Guy, 6 foot chickens! (Ok, I smell a rat here, time to change the subject as Cody is enjoying this yarn).

TC: Who are your musical influences?

Cody: Oh, it varies, it’s a lot. Everything from like, Led Zeppelin to the Stones to Merle Haggard, Hank Williams Jnr, you know – The Band, Drive By Truckers err, there’s a lot of stuff you know.

TC: Talking about Hank Williams Jnr, I love the track ‘Hank’ on your album, ‘Mud’. It’s just brilliant – you sing about the influence he’s had on your music…

Cody: Thank you! Yeah, that’s Bocephus man; he was my first musical love for sure. I got that first tape and everything and that’s a real story and yeah, I guess that’s why I’m here.

Cody: Yeah its f***ing (mutters something indescribable and laughs), beep that part out ok?

TC: (chuckling) Yes okay! Artists like Chris Stapleton are coming over and showing us the blusier side of country…

Cody: Yeah, I mean, real country music done right is amazing you know, that stuff you hear on the radio is just trash – a lot of it – but Chris is an amazing artist, I’ve been a big fan of his for a long time. So it’s good that some people with talent are finally getting recognition.

TC: So I’m really looking forward to hearing songs from your album ‘Mud’ finally played live.  What about any new material, will we be hearing any new songs tonight?

Cody: No, just stuff off Mud. We’ve been so busy, like we’ve been on the road non-stop since the album came out, especially this year we haven’t hardly been home. So probably after we get home, for the rest of the year we’re still touring but not as much, so I’ll start writing some new stuff.

TC: Will you be staying with Dave Cobb for the production of the next album?

Cody: Possibly, you know we haven’t even discussed that, we kinda’ shoot from the hip. Whatever happens, happens, we love Dave, we have a great relationship you know, working with him, sometimes that stuff….everything has to align too you know, the time before you do an album…..you never know. I want us to eventually have the time to produce our own record but that just takes a lot of time – that’s the hardest thing about records with touring as much as we do, finding time to do all of it.

TC: How do you get the inspiration for your song writing?

Cody: I don’t know….you just DO it. It just comes to you do it, you just gotta sit down and do it, It’s nothing special – I don’t have too many ‘A-ha’ moments! No formula at all. I just sit down with a guitar and write.

TC: You should write one about a Mexican fighting chicken – you haven’t done that yet…

TC: What’s your favourite song you’ve written to play live? Or have you got one?

Cody: Man, I dig ‘Mud’ a lot off the new record, just ‘cause it’s very powerful, it’s got a great riff in it and its kinda movin’….so I like that…easily its always the kind of newer ones cause the other ones, you play them so much. That and ‘Shakes’, I like playing the rock’n’roll stuff live cause you kinda’ feed off the energy.

TC: What’s the song that the crowd react to the most?

Cody: Ah, I don’t know….probably Ballad (of a Southern Man) ‘cause that’s our biggest song.

TC: So if music hadn’t been an option, what would your Plan B have been?

TC: So I don’t know much about fishing, but my dad bought me a fishing rod once for carp fishing and I had to thread maggots onto the end of the line before I cast off. Kind of put me off!

Cody: (laughing a lot!) This is a lot different to that! I’d probably be that or maybe a fishing guide, maybe a farmer…who knows? You know, maybe I can do all that when I retire!

TC: Good plan.  So I’ve got a couple of fun questions to end on. First one – your house is burning down and you’ve got 2 minutes to get out. Apart from your instruments what’s the one thing you grab?

Cody: It’s my house? I don’t know man, guitars don’t count? I can only grab one thing? (Thinks hard…) It’d have to be one of my guns, I don’t know which one!

TC: You have more than one gun?

Cody: I have LOTS of guns, yeah. I don’t have any of the old, like ‘passed down’ family heirlooms or nothing at my house so….sheesh…maybe some shoes!  I don’t want to be walking around in my slippers; I guess I’ll put on my shoes haha!

Cody: Probably make it my boots!!

TC: So Cody, to end the interview seriously, I need to ask you if you had to choose to be a superhero – who would it be?!

TC: Hmm, hasn’t Jon Bon Jovi already claimed that one? I’ll let you have it though…

Cody: Yeah, I’ll take his, ‘cause Superman can do anything, right?