What Country Means To Me
By Caroline Gulla

The intensity of my love for country music has come as a real revelation to me recently, especially as I find myself listening to country music radio constantly when I am at home, country CD’s are always in the car, (apart from when my youngest daughter manages to sneak a bit of Bieber in when I’m not looking) and Pearl Jam & the Foo Fighters find themselves relegated to the bottom of the ‘hardly touched’ CD shelf in the front room.

I’m actually not too shocked at my transformation from hardened rock chick to country music fanatic. In fact, lots of music fans I speak to have evolved from rock to country in a seemingly painless transition. The heavily guitar laden sound of modern country music has claimed a lot of ‘crossover’ fans due to the honest, heart-breaking, often witty and intelligent lyrics, which can quickly give way to the promise of a scantily clad pretty girl, big truck and a cold beer. Seasoned musicians, who can play an array of instruments from a banjo, mandolin or fiddle to an electric guitar, can make grown men and women go weak at the knees at their musical prowess. The main pull for me has been how accessible these country music ‘stars’ are to their fans and how much they appreciate them. Kip Moore proved this at C2C in 2015 when he announced to 20,000 fans that he would stand in the foyer and sign everything people wanted, until the last fan had passed through. He was there for hours.

I have to give my grandparents all the credit for instilling a passion for music into my soul. Growing up in an Irish household, my memories of family get-togethers all involve music, dancing, singalongs, my granddad playing his accordion and everyone, including me, getting up to sing solos in front of family and friends, often with a broom for a microphone. Everyone’s party pieces were constant. 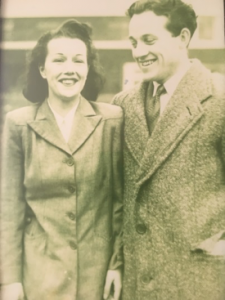 My grandad would sing a medley of Jim Reeves, Charley Pride and old Irish rebel songs and my Nanna would always sing John Denver’s ‘Annie’s song’ – her name was Annie and Don Williams ‘I Recall a Gypsy Woman’. These are the golden moments that bring a smile to my face when I think of my wonderful grandparents. I have re-lived many a moment of the sounds of my childhood throughout my mis-spent youth and into my terrible thirties with a guitar in hand, drink flowing, Loretta & Johnny playing on my jukebox whilst I tried to play and sing along. Country music has a song for every mood – if you want to feel sorry for yourself there is nothing better than an old school, woman scorned/alcohol addled country lament. This can be quickly switched to a satisfying tale of sweet revenge and followed by a feel-good, sunshine filled party starter. Intelligent songs with intelligent lyrics or jokey lyrics with killer tunes – it’s all there for the taking.

However, it wasn’t until a trip to Nashville five years ago for my husband’s 40th birthday that country began to play a significant part in my life. My husband loves Elvis and Johnny Cash (that’s his party pieces out of the bag!), so I decided to surprise him with a long weekend away (but not too long, as we would be leaving the ‘littles’ with my parents). I booked a hotel in Nashville just round the corner from the Ryman Auditorium and within easy walking distance to the honky tonks in Broadway. I hired a car and figured the 6 hour round trip to Gracelands, Memphis, on a snowy February day would be worth it and we could even squeeze in a meal at the Loveless Café on the way back to Nashville. We’d visit Sun Studios, the Country Music Hall of Fame & Museum and as many points of interest as our 4 nights would permit.

As soon as we jumped in our hire car at the airport and turned on the radio, country music blasted from the airwaves and straight into my heart. Kenny Chesney’s ‘Somewhere With You’ and Jason Aldean’s ‘My Kinda Party’ are the two anthems we remember that trip by – they were constants on the radio and so catchy that we knew most of the words by the second day. They ignited my passion for modern country music and the rest of the weekend seemed to go by in a blur of music, whiskey, great food, new friends, more music and a lot of laughter.

We met friends for life in Layla’s bar and in the queue at the Pancake Factory, which is incidentally the best place for pancakes anywhere in Nashville or was at the time of visiting! From bluegrass in Layla’s to Patsy Cline covers in Robert’s Western World to a bit of pop in Duelling Pianos, finishing with a Jason Aldean & Bon Jovi singalong in Tootsies, we had it all that weekend. 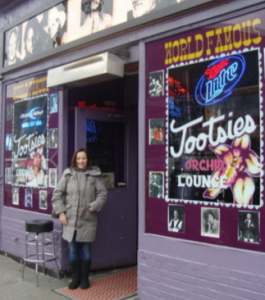 The later part of the evening ended with the band hauling us up on stage to sing with them and little old me working the crowd with the band’s tip jar, as they figured they might get a few more dollars with an English woman ‘shaking it’, pardon the pun! Our timing was fantastic, as I didn’t realise when I initially booked that Glen’s birthday also coincided with the Superbowl and the atmosphere was electric. It seemed we were the only English people on Broadway that weekend and got treated like royalty. After over-indulging on Bud Lights in Tootsie’s Orchid Lounge, I engaged in an enlightening conversation with a quiet guy sat next to me, sipping water and soaking up the atmosphere. It worked out he’d just got a part in Reba’s sitcom on CMT and had flown in from California to Nashville to do some research on his part as a country singer.

His name was Steve Kazee and he seemed genuinely surprised to meet English country fans and appeared rather speechless – although my memories could be slightly marred by the amount of beers I’d drank and it is probably quite likely he couldn’t get a word in edgeways! I found out afterwards he’d won a Tony & Grammy for his work in musical theatre on Broadway and he’s now been cast in Nashville in the recurring role of Riff.

We came back ladened with both tacky and your regular standard goodies we’d bought in the tourist traps, my favourite being a stereotypical ‘redneck wind chime’ made up of bean tins! We’d also purchased quite a few great CDs after a good rummage through Ernest Tubbs record shop, which included a superb Loretta Lynn tribute album including incredible covers by artists including Jack White, Carrie Underwood, Alan Jackson & Martina McBride. I must have played this for months afterwards in the car until my husband removed it as he’d got sick of it…and therein lies the dilemma that I currently find myself in. 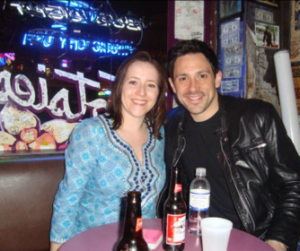 I took my husband to Nashville as I thought it was his dream destination and don’t get me wrong, he still says it was the best holiday he’d ever had but I came home with a serious addiction. In fact, it just seems to be getting worse or better and better depending on how you view it. To put it in the words of a famous rock star, ‘there ain’t no doctor that can cure my disease’ and you know what?
I couldn’t be happier.