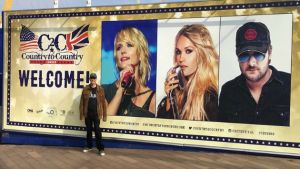 Country music has been a part of my life for most of my life; growing up, music was music, whether it was The Beatles, The Rolling Stones, Buffalo Springfield, Johnny Cash, Merle Haggard or Patsy Cline. As the genres repositioned, and as my tastes matured, my love of music has never wavered. For me, the culture change has been with UK artists.

A handful of years ago British Country music seemed to comprise a slight detour from Irish folk, or middle aged wannabes from Essex and Norfolk trying to emulate their US heroes, badly.  For me, Shania Twain, and the Taylor Swift, brought the genre back onto its logical track, attracting younger listeners and audiences who could relate to the subject matter of the lyrics. Inevitably, these younger listeners picked up their guitars and learned to play along, and then to compose their own songs, rather than trying to be poor impersonations of the US branch of the family, many of whom are no longer with us, and were not able to evolve along with the genre.

Country 2 Country, 2014 became a life changing event, for me.  In 2008, I worked with a man who reignited my interest; he was a massive Terri Clark fan, and had photos of her all over his work cubicle. He was an old school Country and Americana fan, and either introduced me to, or immersed me, completely, into the works of a number of Hanks, Johnny, Kris, Merle, Dwight and Townes van Zandt, Steve Earle, Guy Clark and associated artists, and even as far back as Stephen Foster. I was lucky enough to visit Nashville in 2010, and was able to cement my total love of the genre.

But C2C in 2014 was the revelation.  The pop up stages comprised young musicians who were not trying to be replicas of American ‘stars’. Yes, they sang songs by these artists, but not impersonating them.  I have to highlight Dexeter, The Shires, Ward Thomas and Hannah Jane Lewis as being, for me, at the forefront of this eye opening experience.

I am by no means obsessive, but when I do something, I like to do it to the best of my ability and with as much energy as I can muster.  As a result I have, in my own way, tried to promote the music of these people, who have, at some level, become my friends, as well as nurturing acquaintanceships with tens of other UK artists, and associated movers and shakers. And this has also extended to a number of American artists.  There is a fine line between stalker fan and friend fan. I am conscious of trying to stay the right side of this line, whilst sometimes cringing at those who cross that line. I have also been lucky enough to have been given the opportunity to further promote all sides of the Country genre with a weekly radio show Spire Radio

So Country Music is kind of my life. Most of my current friendship group (certainly on social media) are immersed, to some extent, in our music, most of my spare time is taken up with listening to, researching, compiling playlists, attending concerts and discussing  Country and Americana Music with others, both inside and on the periphery of the genre.  And my gratitude to the people I have encountered is beyond words.

Country In the South