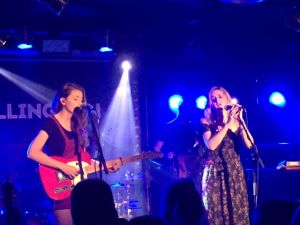 Was it really two years ago that i first saw Ward Thomas live? They totally won me over on that tour when they alternated headlining the dates withThe Shires , and I admit to knowing little about them at the time. Now firm favourites with the crowds at C2C and getting plenty of radio play with their recently released new ( chart topping!) album Cartwheels which I reviewed for this site recently, I was really looking forwards to seeing how they had developed as performers and hearing how some of the tracks would sound without all the studio ” bells and whistles” and with the extra energy live performance generally brings.

Consequently I was happy to find a date a short drive away had been added to the tour schedule. Having sold out the 400 capacity venue ( and most others!) it was clear this concert was going to be a pretty cramped affair, something i admit I wasn’t relishing as I entered the already crowded room, but I must say that is was great to see such fantastic support for UK country music and the atmosphere was great throughout the entire evening.

Opening for the sisters for the first three nights was London based singer/songwriter Scarlet, who’s set had already started as I jostled to find a decent vantage point. Accompanied on acoustic guitar by Scott Viney her strong vocals impressed me immediately. She put on a confident performance, engaging the crowd throughout, not a country artist but more indie rock/pop in my opinion but she had some good material. Apparently several of her songs were co-writes with Jessica Sharman , who coincidentally has also written several tracks with Ward Thomas! Watch out for her EP and promo tour next March.

The excitement was tangible as the time for the ” main event” grew nearer, and a deafening cheer greeted Lizzie, Catherine and their accompanying musicians as they took to the stage ( this was the first time i had seen them perform with a full band ) . Launching straight into acoustic versions of ” Good On You” and ” Where The Sky Is” their trademark harmonies and wonderful vocal range was evident from the start. A quick ” hi and thanks for coming out” followed from Lizzie and then the pace and volume picked up as the band ( lead guitar, drums and keyboard) joined them for ” Boomerang” .This was the template for the evening, songs flowing at a fast pace with little chat in between, and a great mix of ballads and uptempo numbers, acoustic and full band , all of which the girls were totally at home with.

Sharing lead vocals and confident both with or without their guitars, they impressed every step of the way throughout the hour and a quarter set, even if they did seem genuinely taken aback at the reception they were getting after every number and the fact that the audience knew the words to even their newer songs! They joked at one point that they had finally recorded their first ” cool” song as Guilty Flowers had been played on Radio 1! Naturally the majority of the evening was dedicated to the new album, we were told how the title track was actually written two years ago ( and performed on their previous tour) and that it set the direction for the rest of their writing, but of course there were a few songs from ” From Where We Stand” that had to be on the setlist!

Proceedings took a very mellow turn when they decided to recreate the vibe of their recent ” Snug Sessions” ( check them out on Youtube if you are unfamiliar ) with ukelele, accordion and cajon backing being used for a beautiful rendition of ” Proof”.

Finishing off with ” Carry You Home” after introducing and thanking their fantastic band and the venue’s tech team the stage was empty for only a few minutes as the duo were not going to get away without an encore, consisting of the stunning ” Who I’m Not” played acoustically which had the audience totally captivated, followed by the fun and upbeat ” Town Called Ugley” before they adjourned to meet their fans at the merch stand.
What a fantastic evening, veering more towards the pop side of country than the gigs I usually chose to attend but i wouldn’t hesitate to recommend this tour ( if you can still find tickets!) if you appreciate great musicianship, well crafted songs and a polished performance all round. I see they are booked to play the Brooklyn Bowl on 3rd December, too, for a special Christmas C2C Social and I can think of worse ways to kick off the festive season for sure!