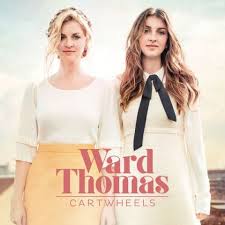 Like many I have been eagerly awaiting the follow up to Ward Thomas’ independently released and hugely successful 2014 debut album ” From Where we Stand”. This time round Lizzy and Catherine, twin sisters from Hampshire , have approached things differently on several levels. Firstly they have collaborated with a variety of writers including two other young girls Jess Sharman and Rebecca Powell ( ” it was a cool dynamic because we were writing songs that we all felt, instead of writing with some older people that have different experiences……” they say in a recent interview) and A listers Ben Adams and Shelley Poole. Instead of returning to Nashville where the first album was recorded using some of the town’s top session musicians, a whole new team is behind ” Cartwheels” which was recorded in London……oh, and the girls now have now been signed to Sony.

The result is 14 tracks which, while still showing their country influences, are often more pop orientated both in the production ( Martin Tefere/Jimmy Hogarth, who’s credits include James Morrison, KT Tunstall and Tina Turner) and writing, and i noticed from the start that the American accent has been dropped from their vocals. More of a ” crossover” album which may well appeal to a wider audience whilst hopefully not alienating their existing fans.

Their wonderful trademark harmonies still shine through, the songs are really well crafted and there is a great mix of upbeat numbers ( some of which are incredibly catchy and radio friendly) and beautiful ballads. A lot of heartbreak inspired songs in there…..maybe drawing on personal experiences since their earlier writing!

Most of you will have probably heard the lead single, Carry You Home with its strong back beat and full instrumentation kicking in after the stripped back opening lines ( which reappear later on in the song ) this one builds beautifully to its infectious, anthemic chorus and changes tempo several times to great effect ( as do several of the album’s tracks, a formula that begins to wear thin at times) although the backing vocals aren’t for me, probably aimed at younger ears!

While on the subject of the catchier numbers, Boomerang and Lose Me definitely fall into this category, although i found the lyrics to the former annoyingly cliched.

But it’s the slower paced numbers that really demonstrate the duo’s strengths in my opinion, and their writing on this album really tugs at the heartstrings at times. The title track Cartwheels is a case in point, about trying to save a failing relationship, some fabulous lyrics and the sister’s harmonies are, as ever, wonderful. But the standout ballad for me is Good On You, with its lilting 6-8 timing it tells of meeting up with an ex who is now happy in a new relationship. Lyrically it paints the picture so well and the instrumentation is perfect.

Who I’m Not is another fabulously crafted track, with its sweeping strings in the background it’s a tale of self discovery

When It’s Not Me is also worth a shout out as one of the more country sounding songs on this album, a lovely mandolin solo helping the cause, and I would love to see this released as a single at some point.
One final mention goes to the current single, Guilty Flowers, probably my favourite track, about realising that history is about to repeat itself, one that many can possibly sadly relate to……” who was i thinking that I could be somebody different? There were signs in your eyes, wonder why i kept mine closed? Another notch on your bedpost”.

About to undertake a major tour, I will be interested to hear these songs without the ” whistles and bells” production. The twins are fabulous live performers, and I see that a couple of dates have already sold out, so get your tickets now if you want to see them! I have to keep reminding myself that these two talented ladies are still only 22 years old, and with two fantastic albums to their credit now it will be interesting to watch their career develop further, hopefully with country still at the heart of whatever they are planning next.