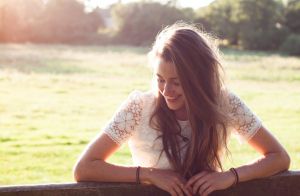 Tell us a bit about yourself?

I am a singer songwriter from Norwich playing country inspired music. I

I grew up to the sound of James Taylor as my mum plays his music in the kitchen a lot. However, I didn’t really get into country myself until I took a trip to America to work on a ranch when I was 19. Everyone there listened to country music more than anything else, and country artists were always being played on the radio. I just fell in love with it. There are so many different types of country music which is something I didn’t really think about until I was surrounded by it. As for influences, I absolutely love Kacey Musgraves’ music, and also Taylor Swift’s early albums. John Mayer, although not country, is who inspired me to start playing guitar, so he will always be a huge influence.

Describe your sound in three words?

Tell us about your first performance and what you’ve learned about playing live since then?

My first performance was an open mic at a bar in Bristol in my second year of uni. I didn’t invite any of my friends as I didn’t want anyone I knew to see me sing! Since then I guess I’ve learned that things take time and not every performance is going to be great, and that not every audience is going to appreciate you… But when they do it’s worth it.

I would absolutely LOVE to play Glastonbury. I’d also love to play the Ryman in Nashville, and, even though it’s small, The Listening Room. I love Nashville gigs because people really listen and appreciate original music. My favourite venue I’ve played so far is probably the Spice of Life in London for a similar reason.

Probably Kacey Musgraves or Maddie and Tae, because I love their music and think they would be fun to hang out with backstage.

When I play covers I often play “It Is What It Is” by Kacey Musgraves. Also “Mama’s Broken Heart”. There’s also a song called “Looking Back on Today” by a band called The Ataris. They’re more of a pop-rock band but I guess I play a kind of slowed down version!

Most of the time a solo acoustic performance, with a little bit of storytelling- there are certain songs I like to introduce before I play them to explain the story behind them.

Being a British country fan, it’s nice to see that country music is becoming more popular in the UK, with the success of artists such as The Shires, and country music festivals like Country to Country.

I’m taking a trip to Nashville in February and will be playing at Buckle and Boots festival this summer. I released my EP in October so am mainly working on promoting that. I’d love to extend it into an album one day.