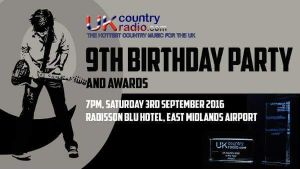 Last night I tuned in live to UKCountryRadio.com for live coverage of their 9th Birthday Party And Awards show and what an enjoyable evening of great British Country Music it was!

5pm through 7pm saw live coverage from Karl Shoemark and Nutty Norah at the Radisson Blu Hotel, East Midlands Airport with the evenings entertainment warming and sound checking in the background. Karl caught up with Acousitc Journey who hinted at some great plans in the pipeline for 2017

The awards show was kicked off with a live performance by Group of The Year Nominees and Little Mountain Festival hostees Blue Genes who are always a delight.

Then the evening of awards was handed over to Martyn Williams and the winners are:-

Thorne’s not wrong when he said ‘UK Country Music is flying this year!’ And then went straight onto give an amazing set with the beautiful Donna Marie on guitar and Justin Johnson, ‘the go to guy’ as quoted by Martyn Williams, on the djembe and producer of Thorne Hills album No More Holding Back. You can catch them out on co-headline tour with Narn in November.

Jack and Robert announced news of their new single Where We Are Tonight on Keep It Country TV last week. To be released on 23rd Septemeber – exciting news !!

Paul and Claire who couldn’t be at the awards posted a live excited and humbled video on social media minutes later. Album produced by Justin Johnson.

This was voted for on the night by the audience and made it the fifth Tom winner for Wayne!

Zenne performed a live set straight after and then the final award was annonuced and presented by the gorgeous 13 year old, Megan of Blue Genes

This puts them at more than a dozen awards in 3 years!! Well deserved by Paul and Claire, a married duo from Glasgow, who have rapidly become one of the hottest acts on the UK scene and are expecting their first child this month!!

Next year will be UK Country Radios 10th birthday party and listening in live to everyone’s enjoyment I the evening has sealed the deal for me, I’ll see you there next year!! 😉 (Lee)