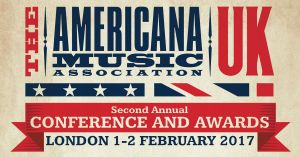 Tickets on sale:
Balcony Buy
VIP Buy
Grammy-winning guitarist Albert Lee will receive the Trailblazer Award from The Americana Music Association UK (AMA-UK) Board at this year’s UK Americana Awards for his contribution to the genre over his long and storied career.

“I discovered American country music in the late 50’s and even though I primarily made my living playing R&R and R&B, I never lost my love for the honesty of country. I was certainly an odd man out during this period when the blues was the most popular genre. My perseverance payed off after I moved to California and my playing was finally recognized. It was during this period that I joined Emmylou Harris and Hot Band and played and recorded with many great country artists. It’s an amazing honor to receive the Americana Trailblazer Award for my continued joy in playing.”
Albert Lee

“We were totally bowled over when we heard about the award; What a huge surprise and privilege. Massive thanks to Bob Harris for the support and belief in what we do – it really means the world to us and we are so excited to be involved and honoured in this way.” Wildwood Kin

Ethan Johns has been confirmed as musical director, once again, for the Awards show at St John at Hackney on February 2nd and his band will join him as the house band. The show will be hosted by legendary broadcaster Bob Harris and will feature performances from nominees and award winners, including Lifetime Achievement Award winner Richard Thompson. The nominations shortlist follows.

The awards show also coincides with the first anniversary of the Official Americana Albums Chart, which was launched this year by the Official Charts Company in partnership with the AMA-UK and is published each week on OfficialCharts.com. To celebrate the occasion, the best-selling UK Americana album of 2016 will be recognised with a special award.

The UK Americana Awards are part of AmericanaFest UK, a two-day event which will also include an evening of showcases on Wednesday 1st February featuring 20 bands playing in various venues around Hackney and daytime conferences on both days.

About the AMA-UK
The AMA-UK is a professional trade association representing and advocating for the voice of American Roots music in the UK. Its membership comprises musicians, both from the UK and overseas, plus professionals from all sectors of the music industry.