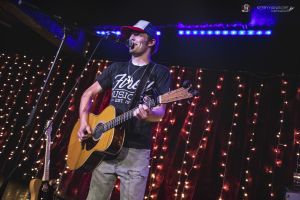 Testimony to the rise in popularity of this young, emerging country/rock artist from Nashville was the fact that last night’s London show was so well attended despite it being a very cold Sunday evening in December ( when most people are skint!) plus not being a ” mainstream” country artist he has had little ( if any) airplay on UK radio.
Tucker Beathard was back in the UK to play three headline shows in three days, a real whistle stop visit for sure, having wowed Dierks Bentley’s fans when opening for him here during his April tour. Since then he has released a superb ( in my opinion!) EP “Fight Like Hell” with his first single ” Rock On” doing tremendously well stateside.

A stripped down version ( just two members) of UK based soft rock band ” Curran” got the evening off to a brilliant start, really encouraging the crowd to feed off their energy and by the end of their set they had won many new fans I am certain. Some of their catchy self-penned numbers had a country vibe for sure, there was some fantastic lead guitar playing and lead vocalist/songwriter Mark Curran had phenomenal charisma. No wonder Tucker was to comment that they were the ” toughest act I have had to follow for a long time”!. Look out for their self-released album in 2017. 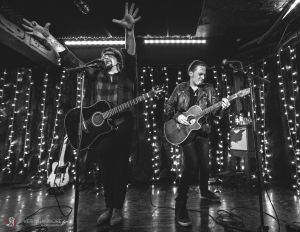 Tucker took to the stage after the customary short break, just him and his guitar as at the Dierks shows, getting off to a bit of a false start due to a quickly remedied technical glitch seemingly with his guitar cable. Launching into ” Better than Me” from his 2015 ” The Demos Vol 1″ EP I noticed the adoring young girls at the front of the rather mixed crowd singing along word perfect ( did I mention, Tucker is incredibly cute?) A quick ” how y’all feeling tonight? ” then straight into ” Ride On”, a song that I wasn’t familiar with but had me hooked with the opening lines ” I was born for the fast lane, a ramblin’ fever in my veins” .

I must say that lyrically Tucker’s writing really impresses me, his raw emotive vocals are fabulous and I love his percussive guitar playing, a throwback from his days as a drummer. 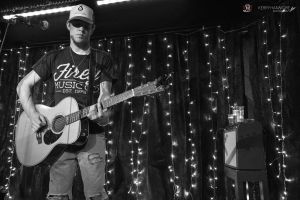 Although here to promote his new EP, we were told that we were also going to be treated to some songs that Tucker doesn’t normally play ” just to get them out there!” and were warned that ” this may be a train crash!” ( it wasn’t!!). I sensed a bit of frustration with the constraints of the industry and contracts, he told us that it’s hard for him to release as much music as he wants to. Showing his bad boy, rebellious side, he had decided to record the show live ( as were his other two dates on this tour) and make it available to those signing up to his fan page. At several points during the evening he said how thankful he was for all the support from the UK , apparently his manager thought he was mad to return again this year but hey, he said, here I am ( huge cheer!). He also expressed surprise at how many had turned out to see him, coming across as a genuinely humble and slightly insecure guy but his confidence definitely grew as the set progressed ( helped possibly by the tequila shots being sent up on stage by friends from the US who were in the crowd but definitely by the warm reception he received)

Attentive to his lesser known material, of which ” She Goes” really grabbed my attention with its clever word play ….. ” when she goes she leaves behind a tattoo in the back of my mind….she goes straight for my heart…..goes good with a bottle of wine” ……it was naturally songs from his recent EP that got the best reaction from the audience, including ” Take on the World” which was introduced as his favourite ( written about the close relationship he has with his elder brother) ” Momma and Jesus” which is about to be released as his second single, give it a listen here,

and ” Home Sweet USA” which turned into a big sing along. On a personal note I was very happy to hear ” Whiskey in a Wine Glass” , a song of his that, although not yet recorded has been very popular live and is about the wild side of a seemingly demure girl. Here’s a version recorded in Portland, Oregon at a live skype session for the local radio station

Finishing an impressive performance with the anthemic “Fight like Hell” , telling us beforehand he was a firm believer in standing your ground, and of course ” Rock On” Tucker headed to meet his fans and I for one can honestly say I am very excited to see what lies ahead for this artist. With an ever-growing fan base here in the UK I really hope he continues to tour here, maybe with a full band next time, he is an artist I highly recommend catching live if you get the chance! And that comes from someone who normally veers towards trad country and americana! Good to see there’s life in the old girl yet!