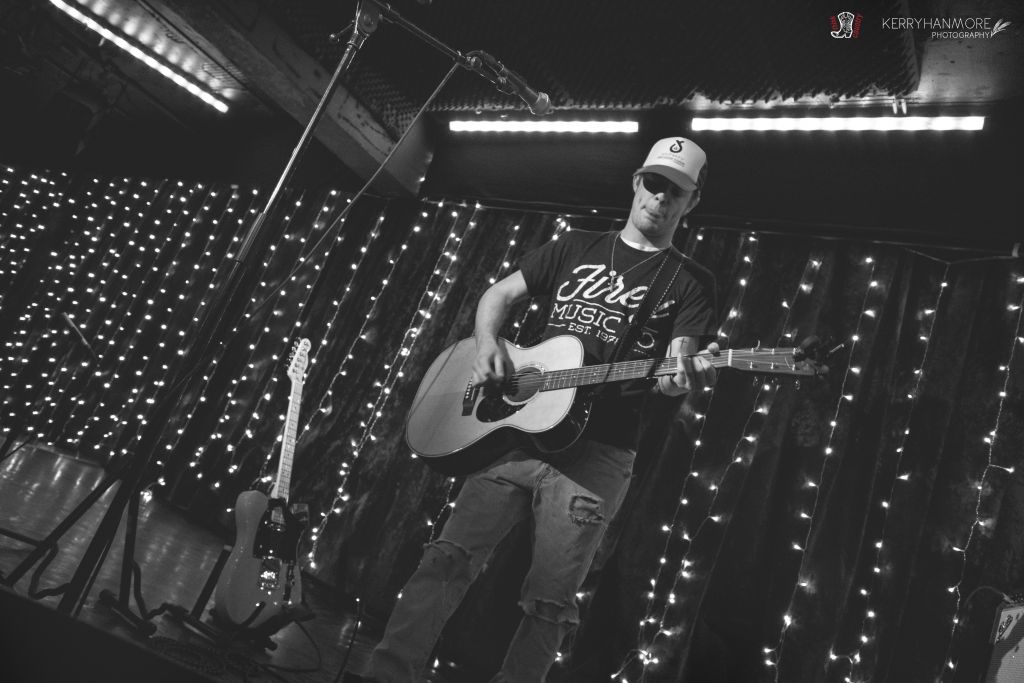 LH Welcome back to the UK, your first headline tour here having been over opening for Dierks Bentley back in April! How was your Dublin show last night? Those Irish sure know how to party donʼt they?

TB Yeah, it was good, the quality was good …..there wasnʼt that big a turn out but the people who were there were were really solid, I expected that, I just want to start chipping away!

LH Going back to the Dierks tour dates here, you obviously played some pretty big venues. Was it nerve wracking walking out onto the stage, just you and your guitar, in front of all his fans?

TB I I usually feel pretty comfortable doing that but I guess I just didnʼt know what to expect…..Iʼd seen the good, bad and ugly back home but over here there were really great crowds who really respect artists who are pouring their hearts out on stage. As soon as I realised that I felt great! Considering Iʼm not mainstream, didnʼt really have a song on the radio here and they didnʼt have a clue who I was…just some kid….they showed up to listen to me, didnʼt get drunk and talk, they just listened to see if they liked me and I respect that! Whether they were sitting there hating my music, or sitting there loving it, Iʼm cool…..I appreciate them giving me a chance!

LH Youʼll be playing more intimate venues this time round, as you have been doing back home too recently I see, where connecting with the audience is much easier…..is that something you enjoy about the smaller gigs?

TB Totally! Especially when you start to build a fan base who begin to connect and jump on board. I love feeding off their energy, itʼs awesome! Having them sing along with the lyrics, not just “ Rock On” that most people back home know, but lyrics from youtube videos and other songs that theyʼve done some digging to find, thatʼs cool!

LH Listening to your EP “ Fight Like Hell”, your rock influences are plain to hear but lyrically it is really strong, which as a more trad country/americana fan I love! Is there any country music artist/writer who particularly inspires you or who you admire?

TB Thanks for that….yeah I agree how important lyrics and storytelling are. Listening to country artist legends like Steve Earle, Johnny Cash, and guys like Eric Church these days, those guys are really good at that, I just love that style of writing. Rock influences my music but when it comes to lyric my influences are definitely country!

LH……And any youʼd like to co-write with in the future?

TB Iʼve been fortunate enough to write with a lot of my heros writers, guys like Johnathan Singleton….and my Dad of course, shoot in my opinion heʼs one of the best and I respect and look up to his work a lot. And Iʼve also got to hear his whole catalogue, not just the ones that made it to the radio, that no one will ever hear! And the demos before an artist made them big. I like writing with my friends too, cos theres no restrictions or boundaries.

LH The lead single “ Rock On” is really catchy and I gather has been hugely successful stateside, What can you tell me about this song, is it based on true life at all, is there “ the one that got away”??

TB Itʼs really not! I was 19 when I wrote it, I wasnʼt planning on getting married, itʼs just that the word play in country music is really cool and I just came up with that simple hook. I was surprised no one had used it before but they hadnʼt!

LH Your love for your home and family comes through strongly on several of the EPʼs tracks, some of which are pretty personal such as “ Iʼll Take On The World With You” and “ Momma and Jesus”, which is pretty confessional!! Do you find song writing therapeutic?

TB Oh yeah! Thatʼs the reason I got into it. I donʼt know how to write a song without it being triggered by some emotion or experience….going back to “Rock On” although itʼs not about a specific girl the chorus is like a middle finger to anybody, like if youʼre mad at your best friend, itʼs just the emotion behind it. I donʼt know how people can write songs that donʼt mean something to them, thatʼs also why I donʼt do cover songs, I donʼt feel comfortable singing something that hasnʼt come from me. I didnʼt get into songwriting thinking Iʼd do it as a career, itʼs just that I didnʼt know how to express myself. Iʼd be grounded in my room and just let it all out on my guitar. I started when I was around 15, for myself, but now they can reach out and be relatable to other people which is really cool.

LH Am I correct in saying you started out as a drummer….was the switch to guitar prompted by your desire to write songs?

TB Yeah exactly, I was a drummer but had a lot of melodies and thoughts in my head. I just put my fingers on where a melody sounded good and came up with stuff, Iʼm glad I taught myself cos if you learn something outside the box you donʼt know whatʼs inside the box…..itʼs one way to stand out! I feel like Iʼm playing drums on guitar.

LH You are Nashville born and raised, was music always destined to play a big part in your life do you think even tho you started off along the sporting path?

TB No doubt, music was always my first love, from the age of about 2, but in High School playing sport was really time consuming, I could only focus 100% music late at night, or when I was grounded.

TB ( laughing) Thatʼs where most of my songs came from!

LH Every cloud has a silver lining!

LH You have very cleverly blended your two passions of sport and music in the track 20-10 Tennessee…was that your idea?

TB Me and my dad and another writer were sitting around looking for new ideas late one day, and we had a weird idea to use the metaphore of a football game to tell a good old country heartbreak story in a different way. What you might not know over here is that the song tells of Tennessee beating Alabama in the game, the irony is Alabama is a powerhouse in football and Tennessee isnʼt all that great hence the line “ I believe in miracles cos iʼm watching one right now” .

LH Does having a father with such a high profile in the music business put pressure on you?

TB No, I donʼt feel that. I am privileged to have been brought up in that environment but he never held my hand or did anything for me. Thereʼs influences that I have and stuff I bring to the table that he doesnʼt . Thereʼs some people now talking s**t, saying “ ah your dad….” but your dad canʼt be an artist for you, canʼt sing or write songs for you. Your dad may be a great pro quarterback but you have to be a great quarterback yourself to play in NFL. But whatever…

LH Thereʼs one song of yours, not on the EP, that Iʼm totally in love with, and thatʼs “Whiskey in a Wine Glassʼ….please indulge me and tell me how that one came to be written!

TB Yes! My best friend Joe, it was his idea, we write a lot together… we were talking one day, he said “ I think every girl has a wild side….I have this idea that sheʼs like whiskey in a wine glass”. We actually wrote that song in a totally different way with a totally different sound then I came home and though man we didnʼt do this right! Itʼs such a great title it deserves better. I sat down and made it more rocking, changed the whole sound of it, it took us a long time to write. Lyrically thereʼs not much depth to it but Itʼs been one of my biggest hits live!

LH And can we assume that an album is on the way for 2017? Maybe with more UK dates on the cards?

TB If it was down to me Iʼd come out with 3 albums tomorrow, but thereʼs labels and contracts…..but yeah, I think we are going to be working on a full length album as soon as possible next year, Iʼm itching to do it! I plan on coming back to the UK as much as I can, I donʼt want to limit myself to just America, Iʼve got bigger aspirations than that.

LH.Fantastic news! Enjoy tonightʼs show, and your Glasgow date tomorrow, thanks so much for your time and looking forwards to what 2017 brings from you.