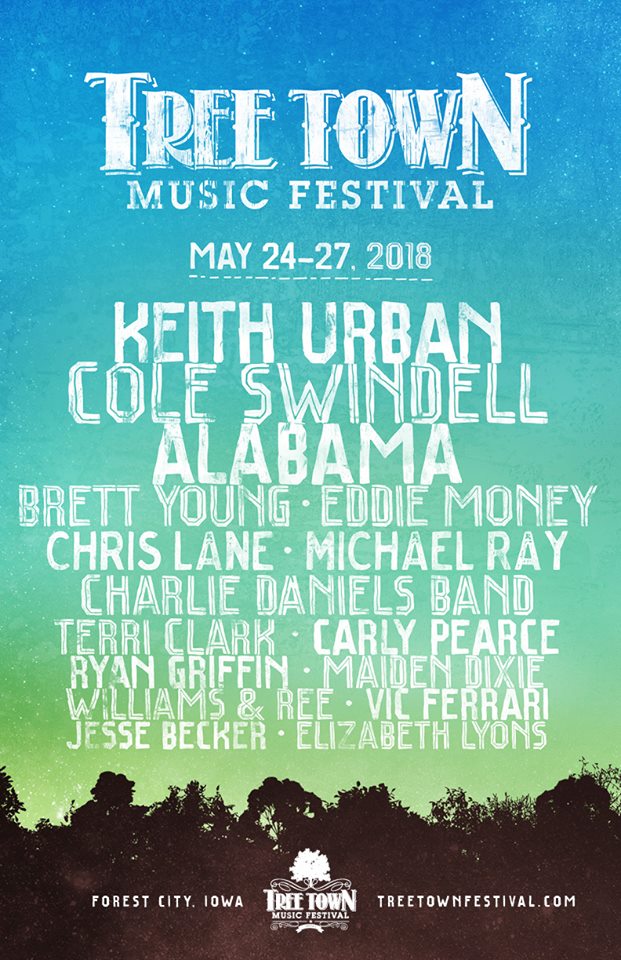 Let me start by saying that I originally went to Tree Town Music Festival with the intent of reviewing the music and the shows that I saw. However, due to security concerns and other media restrictions we were unable to see all of the performances in their entirety. To keep it fair and objective I’ve decided to do a review on the experience as an observer. An observation piece so to speak. So, let’s go back to my Memorial Day weekend in Forest City, Iowa at the Tree Town Music Festival.

Forest City is a small Iowa town with a little over 4,300 people. It’s not the smallest town in the state but it still has that small-town feel. Home to Winnebago Industries this town definitely knows and understands camping. Good thing too, because that’s a big part of Tree Town Festival which takes place right across the street from the motorhome company’s front door.

Tree Town music fest takes place on Memorial Day weekend. 2018 was the fifth year that this Festival has been in existence and they’ve already got a 2019 festival being planned as we speak. The festival is a three and a half day event. I say three and a half because on Thursday they officially open up the campground and have a small show that evening. Friday through Sunday night shows are the shows with the biggest headliners. Whether or not attendees plan to go to the Thursday night performance doesn’t stop those eager to arrive from getting there early. If one is tent camping, it’s the early bird gets the worm, as it is first come first serve. If it’s another sell-out year as it has been before you don’t want to be left without a camping spot. 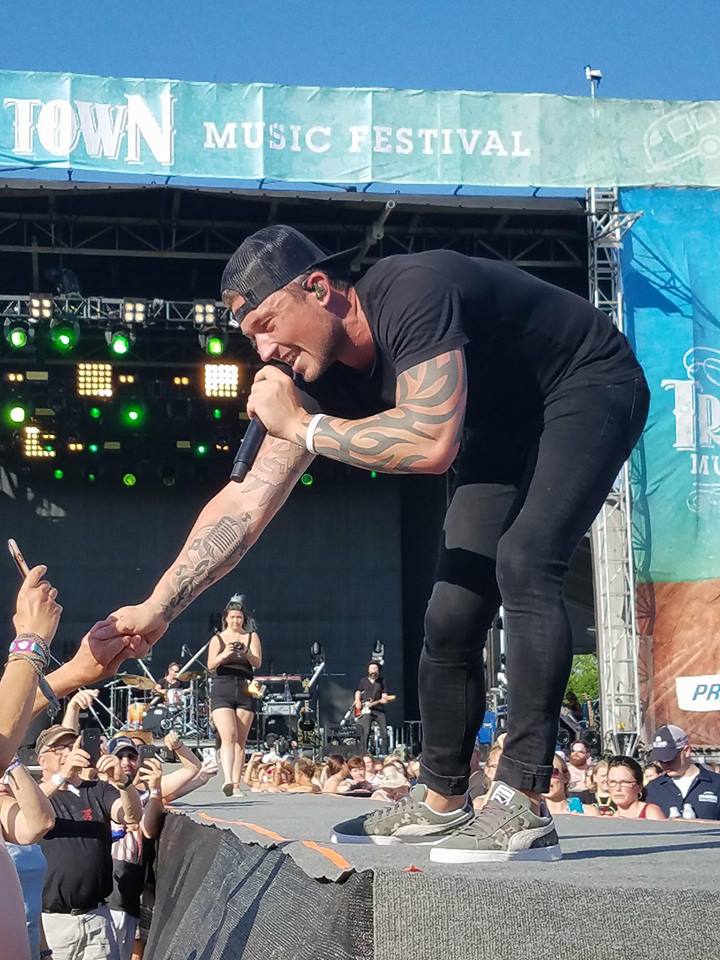 Camping is something that is taken very seriously at Tree Town Festival. Campers and tents line the hills of Heritage Park, home of the festival. One does not simply pull in to Tree Town, put up a tent or set up a camper and let it go. Nope, they get all set up and then make it their home away from home for the next three days. Most set up sitting areas with tables that they will use for entertaining and others decorate their spot to the nines. One common decoration piece this year was one of a useful nature with the record-setting temperatures. Kiddie pools and pickup bed pools. You do what you’ve got to do when it’s so hot and this was no exception. Grills are set up, cornhole sets are placed out, coolers are full, and in some cases lights are hung to decorate the camp space for the weekend.

Once one arrives and is settled in for the weekend, it’s time to get the party started. The first night of shows had some hard hitters already so I knew that we would be in for a good weekend of music. First night performers included Michael Ray, Brett Young, and Cole Swindell. All artists with a strong backing, and making waves in country music. Saturday night’s performers consisted of Carly Pearce, Chris Lane, and Keith Urban. Talking with many attendees in passing and in general conversation around the grounds the highlight of the festival was Keith Urban. No doubt in my mind people came to the festival solely to see him, and I don’t blame them. Sunday night’s show was what I considered to be country night. Yes it’s a country music festival, but Sunday night included artists whose style is 100 percent country all of the time. Terri Clark, The Charlie Daniels Band, and Alabama took to the stage to bring it home, which they did, successfully to a crowd that grew with each set. 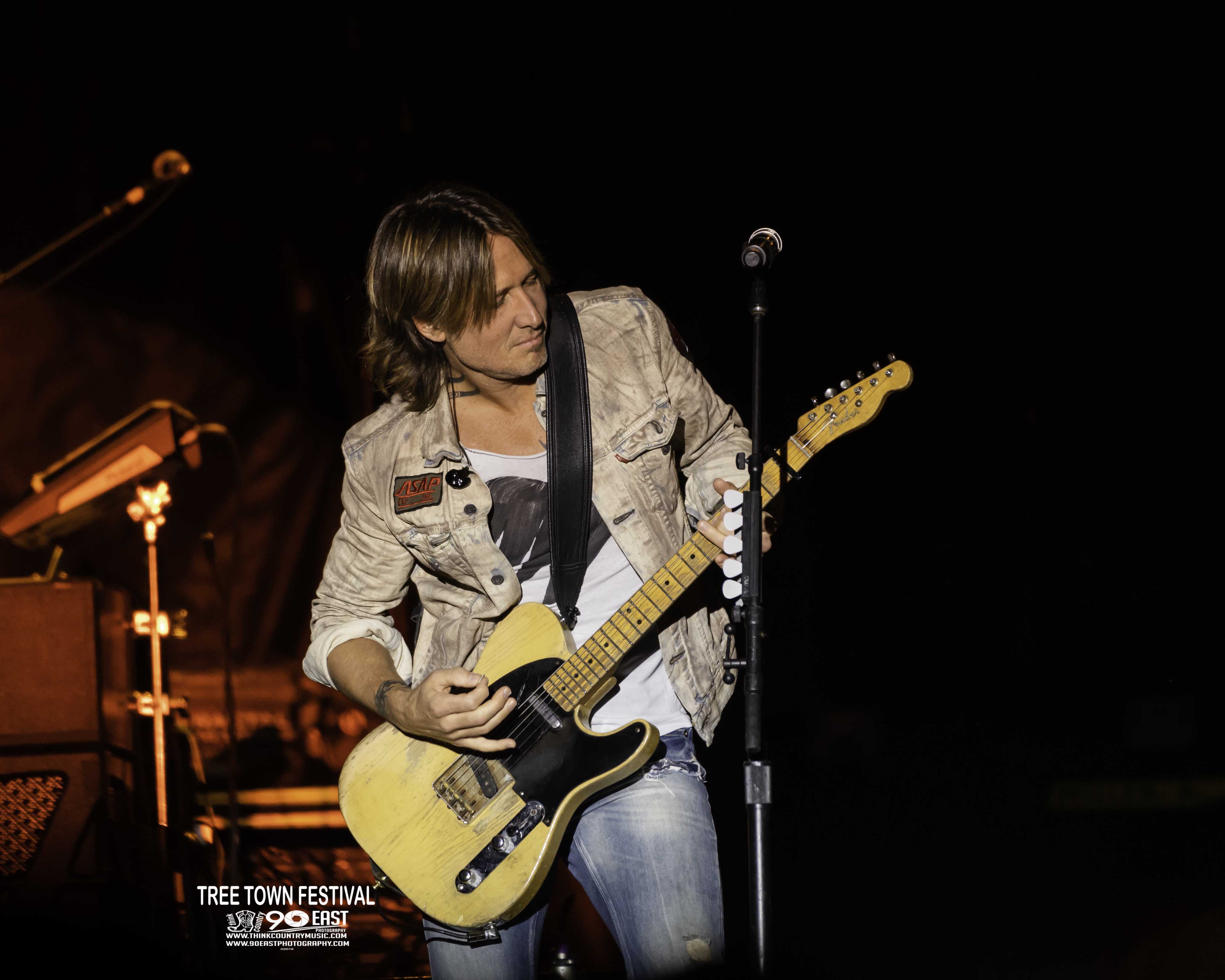 Tree Town Music Festival has a different feel to it in that people come and go when they want and because of that it’s very laid-back. While they have the headlining acts, they do have opening acts for each day also. Some are local and from the area such as Maiden Dixie who is from Minnesota and Elizabeth Lyons who’s got family spread across the midwest including Minnesota and Iowa. It didn’t seem to matter who the opener was for the evening. The crowd seemed to trickle in just the same each night. The crowd got larger as the night went along. I had to ask myself if that would be the same any other year with normal Iowa temperatures. This year was so scorching-hot in the bright sun and high humidity that I think some people did take refuge and decided to wait until later when the temps had cooled down if even just a few degrees. Some fans around the festival who had attended in years past noted that this festival’s attendance seemed to be lower. In continued conversation there’s really nothing that points to why that would be. Previous to the start of the festival I had seen and heard that people were trying to sell their tickets because they needed to finish planting crops for the season. It was a wet spring, if we can say we even had one in Iowa. Believe it or not there was snow on the ground just four or five weeks prior to this. Farming is Iowa’s livelihood, and farmers don’t have hours, they work all the time. It would not surprise me at all if there was a good handful of people that had to pass on the experience because duty called. Some locals may have worked all day at home and still came in for the later shows, so that could play into why the crowd grew larger as the day went on. That is just an off the cuff guess from a girl who has farming roots. Could I be wrong? Definitely, but it seems possible. One will never know what the differing factor was in years past for overall crowd size, but the experience remained the same no matter. 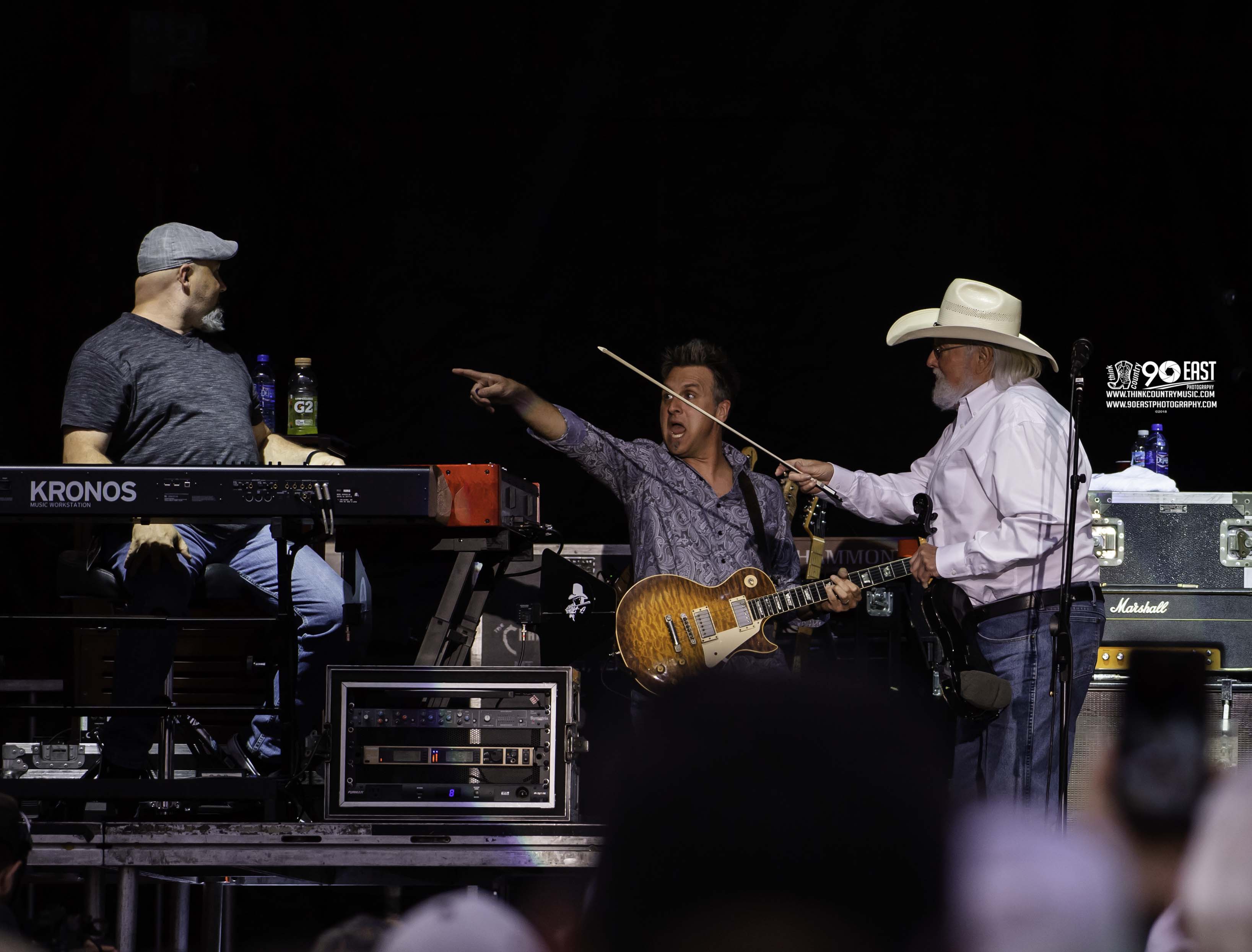 Tree Town has such a hangout atmosphere that it’s not surprising that people would pick it to attend for other reasons than the festival itself. People were celebrating birthdays and I noticed a campsite set up and decorated for a bachelorette party. The party vibe is an absolute constant at Tree Town Festival. So much so that it sometimes feels like the festival is just one big party with all of your friends and there happens to be a concert going on in the background. I don’t mean that in a negative way at all, but the fact that you had to have a concert ticket just to be camping in the first place means there was some definite value in hanging out with friends and having a good time, especially if you never made it to the shows.

You never know what’s going to happen at any of these music festivals and Tree Town was no different. In visiting with our neighbors and now a new friends at the campground I nonchalantly asked if the nice couple was married yet. Hope replied, “Nope, not yet”. I replied with something along the lines of, “Oh for some reason I thought you guys were.” As soon as I said that, with Hope thankfully not paying attention at all, Kevin, her boyfriend at the time looked at me and whispered, “Tonight”. “Huh?” I said. “I’m asking her tonight. During Keith Urban”. Oh my goodness I couldn’t believe something like that was going to be happening and we were in on the secret. Fast forward to the evening shows and it ended up working out better for Kevin to propose to Hope during Chris Lane’s set. Chris Lane’s slower song, “All About You” started and it didn’t take long for the setup to begin. The next thing you know the crowd that surrounded the couple watching them dance began to react to what they were watching. Gasps from surprised fans was soon followed by applause and cheers as soon as she said yes. They finished off the dance and sealed it with a kiss and the rest is history. According to Kevin they became an official item just one-year previous right after 2017’s Tree Town Festival. So you could say this was meant to be. It was definitely one of the biggest highlights of the festival for me. 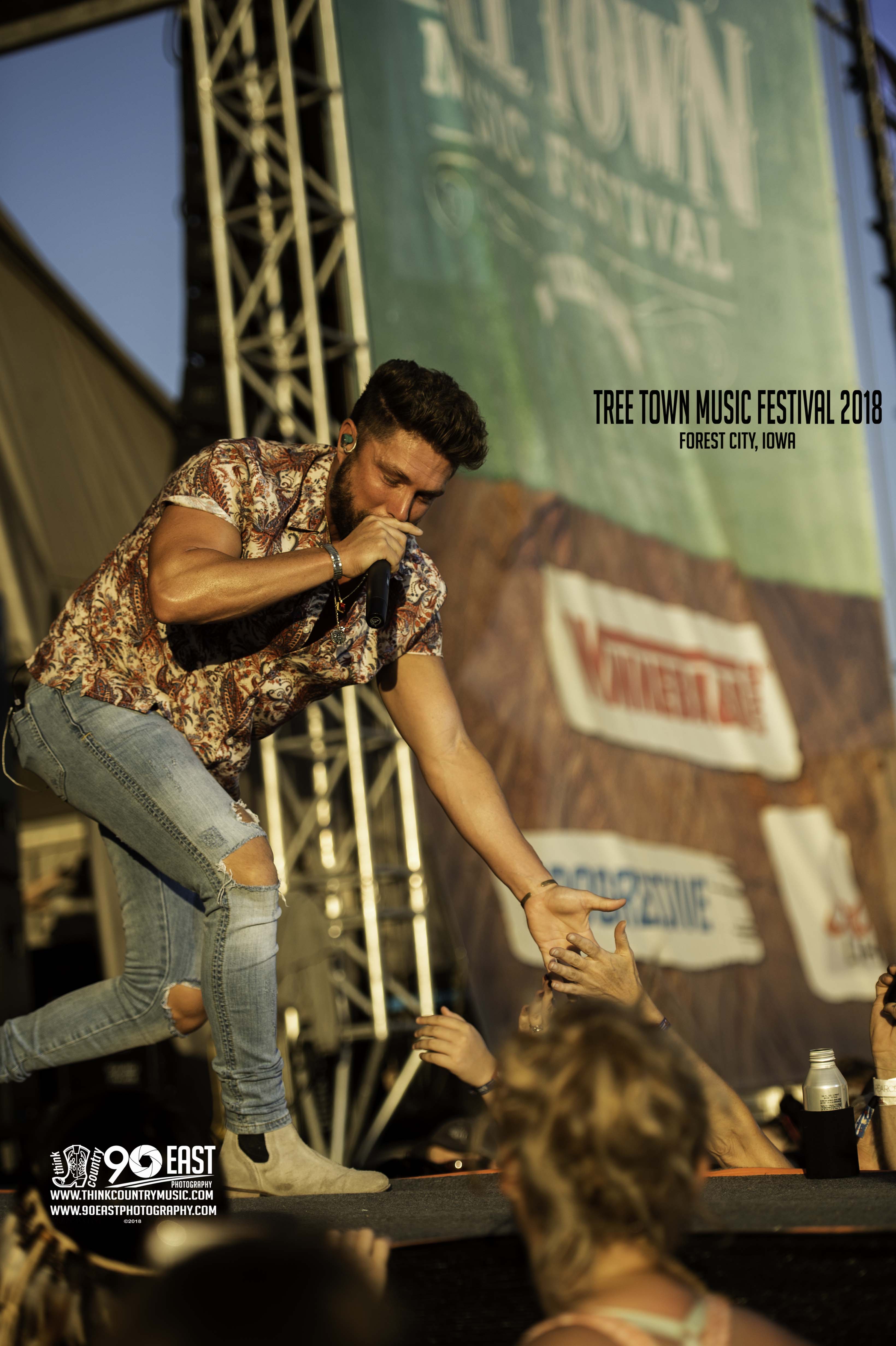 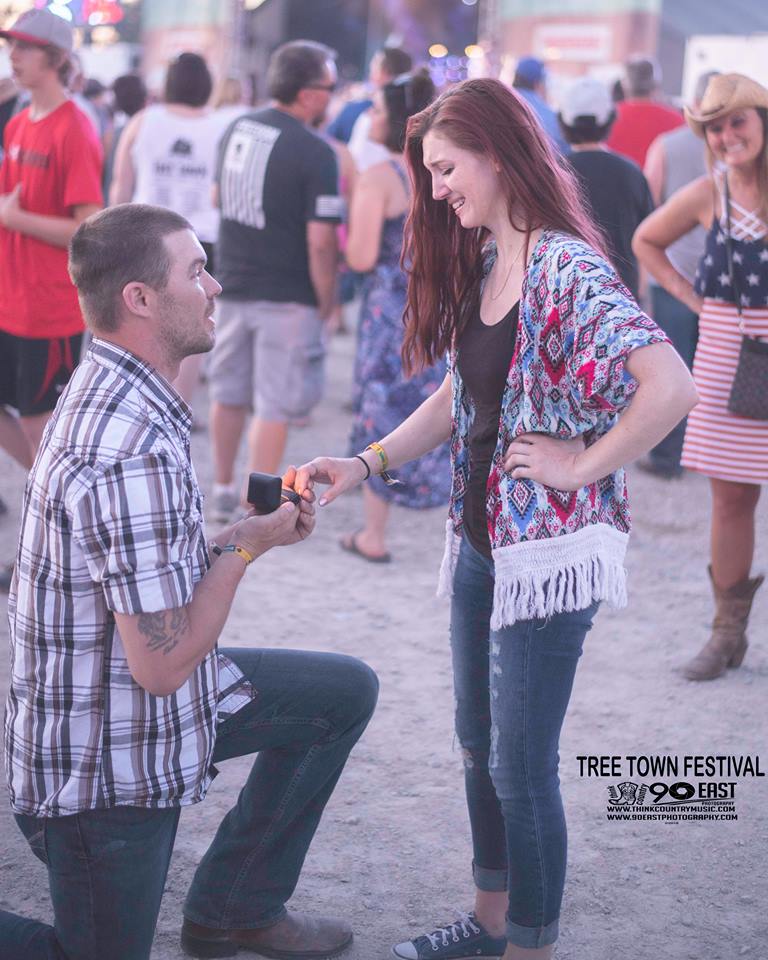 Photo used with the permission of Hope Billerbeck

I’ve been to a lot of concerts, and I’ve been to a few smaller music festivals but one that I attend on the regular is the CMA Music Festival in Nashville, Tennessee. When telling people at Tree Town Festival about CMA Fest, I’d get asked if it’s anything like Tree Town Festival. Honestly, no. The fact that there’s music and the artist lineup is top-notch entertainment, yes, those parts are the same. To be honest, I prefer that they stay different. Tree Town Festival really embodies what a small town can pull off. Not a lot of people know where Forest City, Iowa is. The very first year Tree Town Festival was held Brad Paisley stood on the stage and said he was in the middle of nowhere Iowa. The crowd went nuts to that and it’s something I have never forgotten. It’s true though, how often can you go see a show of that size with that big of entertainment in the middle of nowhere? The laid-back atmosphere makes it so welcoming that it reminds me of going to a friend’s house. When you show up your friend says, “make yourself at home”. That’s Tree Town Festival. Making people feel at home while having a good time and providing amazing entertainment to kick off the summer season. If you want to experience something not like any other music festival out there, get to Forest City, Iowa next Memorial Day weekend. Tickets are on sale already and Toby Keith has been announced as a performer for the 2019 Festival. Come as you are, go with the flow, and enjoy the show. It doesn’t get much better than that. 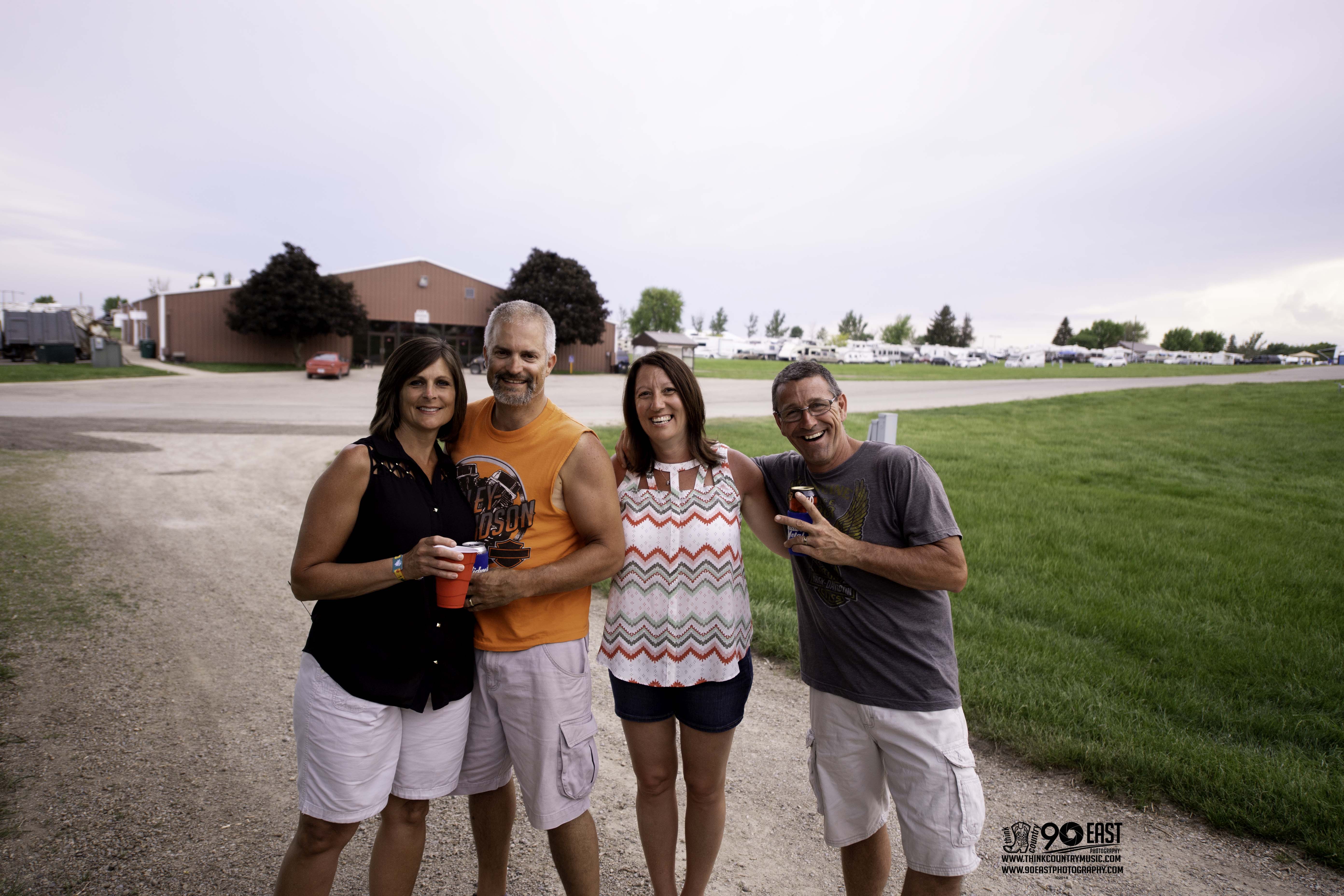 2SteelGirls Finally Get Real With Their New Full-Length Album ...

In Conversation with Songwriter Anthony Smith