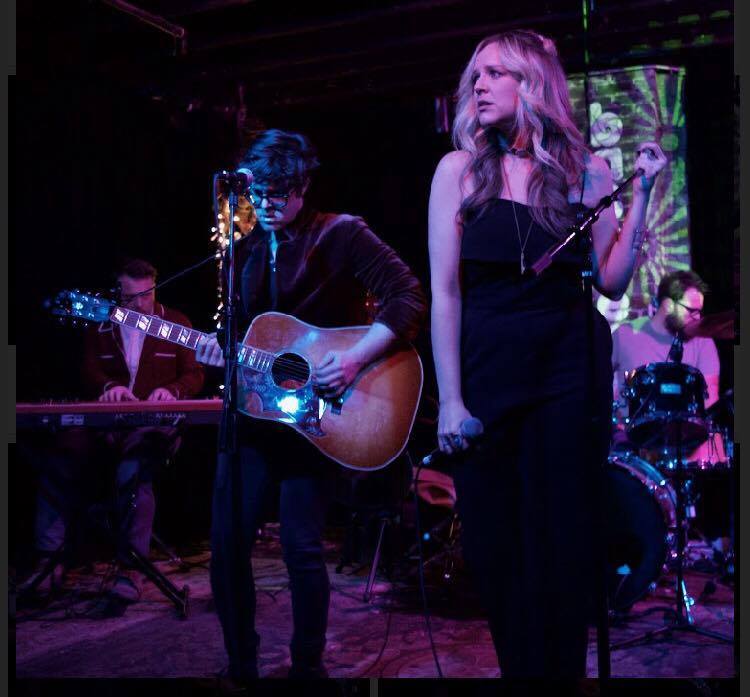 Is it a band? Is it a duo? That depends. Technically, there’s a band backing this “duo”, but I guess, first and foremost, they ARE a duo, and they have a pretty interesting story. Not one to review anything “cold”, I like to know a little bit before I walk in, so I read as much as I could prior to hitting The Basement, to see Towne play their gig.

This duo consists of Jon Decious and Steevie Steeves. Steeves takes on the bulk of the lead vocals, while the rest are picked up by Decious, who also plays guitar. Their harmonies would lend one to believe they’ve been singing together forever, but that isn’t the case, and that’s where that pretty interesting story comes in.
Jon Decious, a native of a small town in Kentucky, toured for nine years worldwide as the bassist with the punk rock band, The Pink Spiders. Steevie Steeves, also hailed from a small town in Pennsylvania, and calls everything from musical theater, classic rock, R&B and jazz her original wheelhouse. Clearly, these two musical souls came from very different backgrounds. 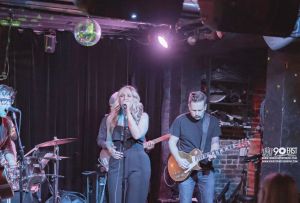 It was at Skip Ewing’s Horse and Writer Seminar in Wyoming that Decious and Steeves met and immediately discovered they connected musically. Then, if you believe in stars aligning, or other such universal communication, they also found out they were both residing behind the liquor store on 8th in Music City and had absolutely no idea. What were the chances? They only had to travel thousands of miles to realize this, and to also find out that despite their very contrasting musical backgrounds, they could probably create something very special. Along came Towne.

Towne, the name of the band, comes from the style of the music. According to Steeves, “We aren’t quite big city, and we aren’t really small town, we’re in the middle. We’re the Towne.” Fair enough. I was ready to listen to this band.
For those who have never been to Nashville’s venue, The Basement, I should probably quickly set the scene. One of the most popular live music venues, it is exactly what it calls itself. It’s a basement. It would likely remind you of a basement in an older city. Maybe one of those basements that you’d be hesitant to enter if it hadn’t been inhabited in some time. Thankfully, this one gets to see human life constantly, so it’s pretty safe, but it’s small and it’s loaded with memorabilia everywhere. Every surface, it seems, has something affixed to it. Stickers, posters, something. It’s your mother’s basement, only much cooler, because if the walls of this basement could talk, they would never shut up.

Towne took the stage with a backing band consisting of a bassist, keyboard player, drummer and a guitar player (in addition to Decious). Their drummer, Evan Hutchings, doubles as the producer of their EP, “Games We Play”. The duo, up front, immediately makes one wonder how this is going to work. They couldn’t look much different. Steeves, dressed all in black, with long flowing blonde hair, reminded me a bit of Miranda Lambert. Decious, on the other hand, in a reddish jacket and black horn rimmed glasses, looked like he might start playing something on the level of Buddy Holly or go the opposite direction, and play a Devo cover song. I was intrigued.
As they say, never judge a book by its cover. I didn’t get Miranda, and I certainly didn’t get a New Wave cover song either. The first song, entitled, “Runnin’ Into You”, and the first track off their EP, sets the tone for how completely measured this duo is when they play. They pay attention to one another. Neither one is off playing diva, letting the other one become lost. I liked that right away. Let’s call it “cohesiveness”. I can’t call this song a ballad, because it’s far too uptempo, but it definitely pulls at that “ballad center” of everyone’s brain. Yes, if you have a pulse you know exactly what I’m talking about here. The song was a good choice for an opener. Steeves, rocked a tambourine during this number and it was after they ended it, I made my decision that this was probably going to be a worthwhile show.
The next song they did, “Halo”, is not on the EP, but was a little bit mischievous, and in that, pretty delicious. Note to Towne, find a spot for this one on the next record.

Remember how I mentioned that this duo pays attention to one another? In their next number, they took that attentiveness, and put it on boost, with a little thing called “chemistry”. “Go To” smoulders. As good as the band behind them was, they seemed to have fallen away during this song. It was as though Steeves and Decious were the only two in the place, and they had just become acquainted and let that chemistry take over. This one hooked me in and sadly, it isn’t on the EP. Another note to Towne, record this somewhere please!
“Quit Them Cigarettes” is a breezy tune, a trip down memory lane, back when Matchbox Twenty was king of the radio dial and Chevy Chevettes weren’t buried in the dirt sub-basements of junkyards across America. Again, not on the EP, but I have to concede, an EP is only so long. Choices. Life is hard, isn’t it?
While Steeves is completely capable of handling lead vocals most of the time, and does so beautifully, it’s ironic that perhaps the most impressive song of the evening was “The Rest”, where Decious takes over the reins and sings lead.

The shared harmonies are incredibly perfect here, and Steeves was quick to point out that she was so grateful this song made it to the EP. If asked whether the EP is worth buying, I would say yes, even if it were just for this one track. This is songwriting at its best, and it actually might take the average listener a time or two to let this one sink in, but once it does, it’s guaranteed to become a “never skip on shuffle” tune.

Towne recently released a video for one of the songs on its EP, “The One I Love”. It’s been getting a lot of attention and that’s no surprise, because it’s very well done. The song is a haunting tale of being with someone when you’re in love with someone else. Steeves mentioned how the idea for the song came about. She carried it around on a napkin, moving it from wallet to wallet over time, until it eventually became a song, and then a video.

The last song of the night actually did bring out the Miranda that I thought I saw in the beginning. A sassy, upbeat, modern country-esque tune called “Hangups” was the best possible way to close a show. Towne lists its genre as a mix of country, rock, pop and folk, and after hearing this song, I can honestly say, that yes, I’m pretty sure we got a good dose of all of that, but not in a musically confused way. Blended together in such a way that makes me wish they would come up with a whole new genre name. This duo has something special, and they deserve to be recognized in a special way.