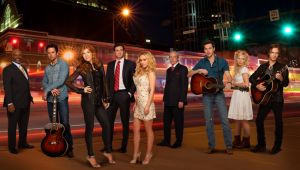 Currently in its fourth season, the hit US country music drama Nashville has drawn viewers from all over the world into its soap opera storylines, but what’s most loved about the show is the music. Featuring almost entirely original music all sung by the actors themselves, the show has shone a spotlight on Music City’s unsung heroes: the songwriters. Some of the cast of Nashville are currently out on tour in the US, and will bring the show to the UK in June. As preparation, here’s a rundown of the top 10 best songs from Nashville.

There have been a lot of radio-friendly songs on Nashville – that’s kind of the point – but I’m On It is definitely one of the best examples of tracks we could expect to hear from the genre’s real life heavy-hitters in 2016 (or 2015, when it was released). A mid-tempo driving song about how the narrator’s memory will keep haunting his ex-lover, it fits in perfectly with any modern country playlist.

Undermine was the third song we ever heard from Juliette Barnes, and it served as a major plot point for her character development, as she attempted to express a deeper and more authentic part of herself. It’s a great song, and was actually co-written by Kacey Musgraves and Trent Dabbs (member of the duo Sugar & The Hi-Lows, who toured with Kacey on her most recent UK tour).

8. Nothing In This World (Hayden Panettiere – Juliette Barnes)
Season 1

Following the death of her mother and her exploitative ex-lover, Juliette is left reeling and trying to deal with all her emotions in the aftermath. She turns to music to help her through, penning a highly emotional song that she debuts on the Bluebird Stage. Her performance takes us through the season one finale montage, as elsewhere Rayna and Deacon are fighting in that fateful drive that results in a crash. It’s a raw and hard-hitting song that was co-written by Kate York and Sarah Buxton.

Blind, while not featured on any of the soundtrack albums, is important because of how it re-framed Layla as a serious songwriter with some stories to tell, after her country pop past. Blind is raw and dark, and totally underrated.

6. Fade Into You (Clare Bowen & Sam Palladio – Scarlett O’Connor & Gunnar Scott)
Season 1
One of the first few tracks that we got from Scarlett and Gunnar, Fade Into You was a fan favourite from the beginning for its soulful tones and sultry lyrics. The fire between the two characters has not yet burned out in its fourth season, and is one of the defining highlights of the show.

After her affair with a married man led to her public fall from grace in the country music world, Juliette took to the Grand Ole Opry stage to perform her newly-written Don’t Put Dirt On My Grave Just Yet. The sassy country rock song tells listeners not to count her out yet – she’s got a few more things to say and do before that happens.

As Scarlett attempted to navigate life on the road with her solo recording contract, she was struggling to find a sound that worked for her. Rayna paired her with bad boy producer Liam McGuinness, who discovered her private poetry. He turned one of her poems (about her abusive mother) into an epic song that shows us another side to Scarlett. Fun fact: the track, written in real life by Lucy Schwartz, was actually the first song ever written specifically for the series. Since then they have penned a few more to aid certain storylines, but largely the music comes from the songwriters of Nashville and the songs they write from 9 to 5.

3. When The Right One Comes Along (Clare Bowen & Sam Palladio – Scarlett O’Connor & Gunnar Scott)
Season 1
Written by Striking Matches, When The Right One Comes Along came at a poignant time for Scarlett and Gunnar, as they really gelled in their songwriting and became significantly closer. It’s an absolutely beautiful love song, and continues to be one of the highlights of the entire show.

Also written by Striking Matches, I Ain’t Leavin’ Without Your Love is an incredibly catchy track and a great singalong. Gunnar, Avery and Zoey perform it together when they decide to form a band (ZAG), and it’s just such a fun group effort it’s guaranteed to put you in a good mood.

Of course it had to be this song, right? Written by Ashley Monroe and Sarah Siskind, the track first appears as a new song from the Conrad sisters, but later gets repurposed as a family performance at a military benefit with Rayna and Deacon providing harmonies. It’s a stellar song, filled with the kind of heart and soul that the show is rooted in, and a peace and gratitude that we sometimes wish Nashville had more of. The soap opera storylines are great, but at the end of the day, don’t we all just want them to be happy?