I went to the London version of C2C last year, but circumstances dictated that the Friday night line up at Glasgow was best for me this year. Initially when the line up was revealed, I was a little underwhelmed, but amazingly, the three artists I really wanted to see were on the same night – Midland, Margo Price & Emmylou Harris.

So it was that at 5.30 sharp, Midland ambled on to a probably quarter full SSC Hydro arena for the graveyard shift.  (There’s more about this later in this review). They didn’t disappoint. From the opening “Check Cashin’ Country” Mark, Cameron & Jess, together with their two back up band members, played a set of classic up to date country rock, with overtones of the Eagles, Poco, Byrds ect. Majoring on songs from their debut album, they played an 11 song, 45 minute set with a couple of surprises thrown in. The first was a cracking cover of Tom Petty’s “American Girl”, which rocked. The second was their version of Alabama’s “Dixieland Delight”.  They even threw in a quick excerpt from David Lee Murphy’s “Dust In The Bottle” for good measure. Other highlights for me were the last three songs they played – a trippy “Alcohol Adjustment”, “Make A Little”, & a triumphant “Drinkin’ Problem”.

These guys are the real deal. Anyone who hankers back to seventies country rock have new heroes who can carry the torch. It was just a pity there was so few people in the arena to see them. That said, the band received a really good hand from those there. They’re back in the UK in November. Tickets on sale soon!!

Lukas Nelson then sang a brief three song set on the Spotlight Stage. Initially the sound was terrible, but this was quickly sorted. On his final song “Just Outside of Austin”, which reminded me of Glen Campbell’s “Gentle On My Mind”, he sounded exactly like a younger version of his Dad. Played guitar just like him too. 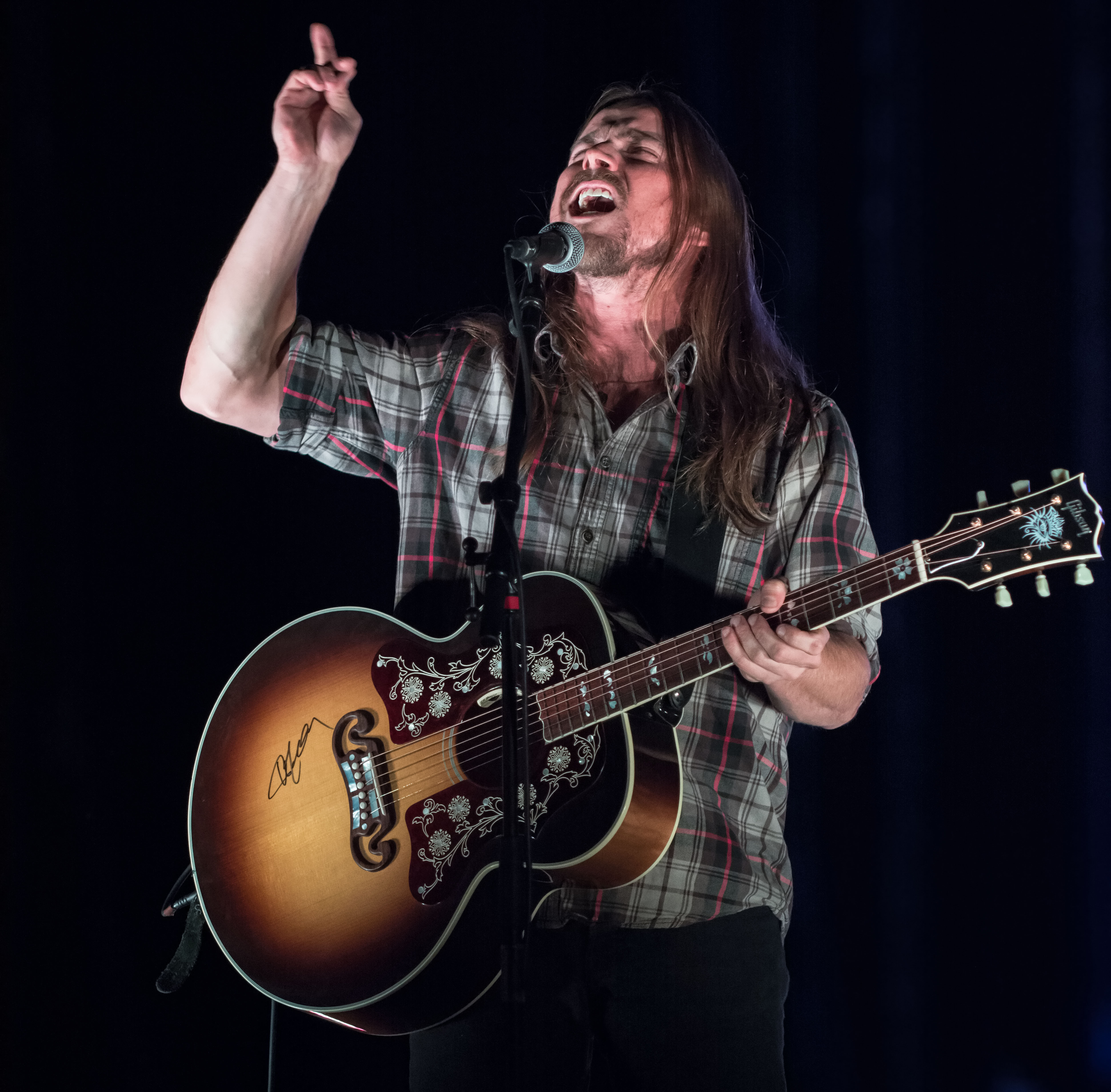 Margo Price opened up with “Don’t Say It”, & for the next hour or so, played some brilliant country music. Her classic country drinking number “Tennessee Song” is a lovely two stepper, “Since You Put Me Down” & “Wild Women” followed, & then came the first show stopper of the night – “Cocaine Cowboys”. On record, this is a powerful song, but it didn’t get anywhere near the power of the song live. Margo’s stage set up had two sets of drums, but only one drummer in her back up band. Half way through the song, she threw down her hat, sat at the drums & we were then treated to a 3 to 4 minute “drum duel” with Margo & her drummer keeping pace with each other. She sure could bash those drums & they were utilised brilliantly on this song. I’m sure though, that the staunch traditionalists were covering their ears in horror!!

Margo then moved onto piano & sang a beautiful version of “All American Made” complete with withering line “I wonder how the President gets any sleep at night” – brilliant.  Prior to another standout “Paper Cowboy”, she said  “Wanna hear some real country music?” Could this have been a dig at some of the other artists appearing at some of the other C2C

venues – it wouldn’t surprise me. My only quibble with her set was that instead of using one of her own songs to finish, she ended with a cover of “Proud Mary”. Good though it was, she has so many great songs that she could have used to end her set.  I hope she comes back to the UK soon, as she is a brilliant songwriter with a voice (& band) to match.

Ashley Campbell appeared on the Spotlight Stage playing banjo & guitar, backed by guitar & fiddle. She played a medley of songs “for my Dad” & played snippets of Glen’s most famous hits. She finished with her own song “Remembering”, which went down well with the growing crowd.

An hour long set from the legendary Emmylou Harris was never going to be enough, & so it proved here. I just hope that her set was recorded for posterity, as her voice, which can bring a man to tears, was on superb form. Aided by her tight little band the Red Dirt Boys, Emmylou spanned the years with a selection of classic country songs from her outstanding repertoire. I’m not sure what fans of Little Big Town & the present line up of Nashville “stars” would make of her, but the vast majority of this audience were with her all the way.

“Here I Am”, a beautiful haunting version of “Orphan Girl”, & “Red Dirt Girl” opened the set. Going back some years, she followed this with “Making Believe”, & “Wheels”, her nod to Gram Parsons, which made the chap sitting next to me wearing his Gram Parsons t-shirt very happy!! “Luxury Liner” followed, allowing the various Red Dirt Boys to kick out. A lovely version of Townes Van Zandt’s “Poncho & Lefty”, “Michaelangelo” & “Green Pastures” sounded beautiful with Emmylou’s soaring vocals sounding superb. A rocking “Born To Run” moved things along.

She took a breather to mention that she’s coming up to 71 years of age – wow, she sure sounds fantastic. She then sang her favourite song of the moment, Billy Joe Shavers “Old Five & Dimers Like Me”. She finished with “The Pearl”, a fitting end to brilliant set.

So far, so good. Three fantastic sets. Then came Little Big Town. Ohh dear. Whereas all three other performers had taken a low key entrance to the stage, LBT came with fanfares, a film projected to the back of the stage, & what seemed like an eternity to get going. When they finally made it on stage, they launched into “Rocket Man”, a lovely cover of Elton John’s song. A good start.

I must mention here that I saw LBT in Newcastle last year & thought they were ok but very “Las Vegas”. I was expecting a similar set, but to be fair to them, they changed things around (thankfully no cover of “Wonderwall” this time). All the hits were there though – “Pontoon”, “Happy People”, “Better Man”, “Rollin”, “When Someone Stops Loving You”, “Day Drinkin”, “Stay All Night” amongst the 20 odd song set. They were at all times very professional, (except when Karen forgot the words to “Better Man”, & when Jimi went flying when he tripped up going walkabout from the main stage to the Spotlight Stage during “Little White Church”).

My issue with LBT is that when they are good they are excellent, & when they are at their most bombastic they are simply aweful. The acoustic set on the Spotlight Stage was a case in point – their harmonies were superb on snippets from “Bring It On Home”, “Sober”, “You’re Side Of The Bed”, “When Doves Cry” & a medley of Don Williams songs. It’s when they become shouting, screaming, heavy metal LBT (too many times in this set to my mind), that they become a little pretentious & about as far away from country music as you can get – sorry.

As an example of this, on “Faster Gun”, another drum set was rolled out onto the stage for Jimi to have a go on. However, unlike Margo Price earlier who’s drumming really added to her song, this did absolutely nothing except make people think “wow, Jimi plays drums too”. To me it looked like a bit of an ego trip, as he hardly touched the drums at all. I wish they’d scale things down, pick a better set list & use their brilliant harmonies to the best effect. A personal view, but one which I think might have been shared by many in the arena, who left before the end.

The encores were the obvious “Girl Crush” & “Boondocks”, & then it was all over for the night. As I said, three of the best & a ho-hum.

According to the man in the Gram Parsons t-shirt, the smaller venue where the Glasgow C2C was held last year was full every night. The move from a 2,500 seater venue to a vast 13,000 one did it no favours. I hope that the weekend concerts were more heavily attended, as Friday’s number was disappointing. All the top tier was curtained off, I sat in a balcony seat & had the row to myself, there were row upon row of empty seats, & there were also many gaps in the seating on the floor. Whether this was because it was a Friday & people were at work late, the cost of tickets, or the lineup, I don’t know, but it made for an evening lacking in atmosphere. The organisers of C2C need to look at this for next year, as I can see that Glasgow will lose out if this is repeated at the weekend.

I believe that this is maybe what the organisers want – so that everything to be centred on London. I saw little or nothing on the internet/social media about what was going on in Glasgow or Dublin, hardly anything on the C2C app, or any real effort made to put more stuff on at the venue (there was a small selection of CD’s for sale, that’s all). I hope that there’s a bit of a rethink for next year. It would be a shame for the “poor relations” to miss out. Not everyone can/wants to travel to London. Rant over!!