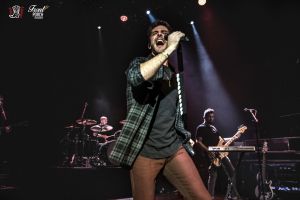 A rainy Sunday evening in Manchester was the setting for a sold out Thomas Rhett gig! The venue saw fans line the building and all the way up the street and around the corner too, it was refreshing to see (not the feel of the cold rain) everyone’s spirits high and excited for the evening of entertainment ahead of us.

7pm sharp,the doors opened and pretty quickly everyone filtered inside the building at the O2 Ritz, and what a great venue it is. A small yet ample space to display an intimate concert, no separated tickets either so on in you go and choose if you’d prefer to stand amongst the lively lot or go up stairs and overlook on the balconies both with very good view.

So, as the posters depicted 8pm start was the one and only Rhett Akins, Thomas Rhett’s father. Just Akins and his guitar took to the stage after a very casual and humble introduction by a member of Rhett’s team, Mr Akins introduced himself and Thomas Rhett’s father and introduced a song that he wrote and released called ‘That ain’t my truck’ which many sang a long to. 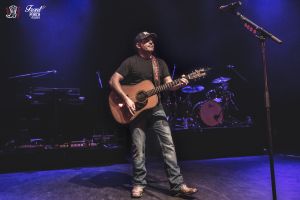 It was certainly a great change to your normal warm up, just one man, one guitar was perfect for this small gig!
He continued his set by talking about songs he has written for some well known artists including ‘When she says baby’ released by Jason Aldean and ‘Honey Bee’ released by Blake Shelton all of which he performed for a very receptive audience who were more than happy to join in and amplified the sound to another level!.
He continued with a few extra songs and thanked everyone for attending and gave a shout out to his son who was soon to follow, a proud father moment was clear.

Atkins vocal acoustic performance was undoubtably fantastic, and it was a great start to the evening for sure.
9pm and the lights dimmed and the band joined the stage… the fans went wild and with that the ‘Star of he show’ appeared… Oops no pun there.

It was in to ‘You make me wanna’ and Rhett knew how to work the crowd, everyone moving along to the catchy tune, the set continued to ‘Tangled Up’ then ‘Star of the Show’ to which, Rhett mentioned his father who was in on helping him write this chart topper this was on of my favourites for the evening it’s a song beautifully written and delivered with vocal excellence throughout.

‘T-Shirt’ and ‘You make me wanna’ got this already ecstatic crowd raising the roof, and creating the perfect concert environment.

With all the backing from the bands instruments it was stripped back to three stools and an acoustic mini break where Rhett described it as ‘one of the favourite parts of his show’ the first song he shared was ‘Beer with Jesus’ a fantastic song appreciated by fans who held up their phones and put on their lights and swayed as Rhett sang perfectly.

Rhett spoke about a recent event that was a highlight of his career, the CMA awards he said he wanted to sing a couple of songs that stood out to him there he performed a medley of Keith Urban then in to Chris Stapleton’s ‘Tennessee Whiskey’ and joked about another great song… ‘Die a happy man’ his own. Rhett shook things up a bit by covering ‘Friends in low places’ by Garth Brooks half way through the song he called on one person to sing with him, he asked around for someone who knew the words and up got a lady who he put his guitar on and the music started up and the lady sang the chorus and the audience were really good support! It made it a real fun experience for all.

Crash and burn was up last and was a great addition to the set, Rhett thanked the fans and walked off stage to which chanting and thumping of the feet began to call the boys back on stage for an encore they performed
‘Vacation’ off of the new album and then a song that Rhett made with Lee Brice ‘Parking lot Party’ for which, he called his dad out to help! This was a really great way to end there show and what a show it was, come back soon!