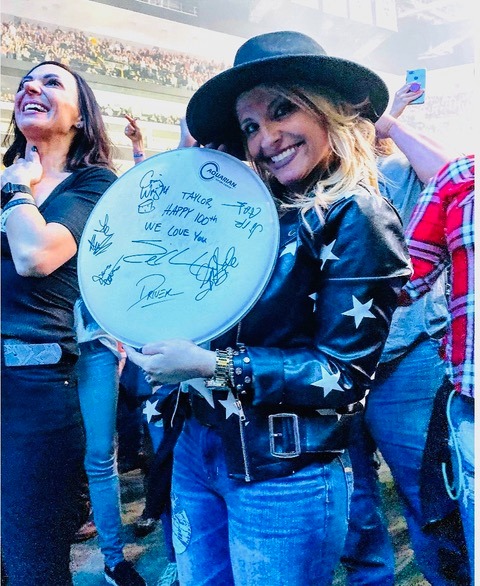 Taylor Hendrix was nominated to be our new Think Country Superfan by her long-time friend and fellow Eric Church fan Dave Pennington.

Taylor Hendrix is our Eric Church Superfan.  She comes to us from Hartselle, Alabama. Taylor is the mother of two children who share her love of Eric Church as does her husband, Mitch.  Beyond attending concerts, Taylor loves to travel, hike and to be in the great outdoors with her family, although at times her teenagers are not so much into hiking.  It’s hard to imagine that Taylor has any free time with the concerts and music festivals that she regularly attends.

When it comes to Eric Church, the term “Superfan” does not seem grand enough for Taylor. In November 2019, Taylor was sitting in the front row of her 100th Eric Church concert in Sacramento, California. It was the final night of his tour. Soon after in March 2020, was the beginning of the pandemic shutdown that changed life as we know it. With concerts suspended since then, Taylor has been waiting to fill a seat for her 101st Eric Church concert.

Taylor grew up in a house where country music was always playing. Her mom, a country music fan herself, filled the house with the music of Marty Robbins (her mom’s favorite), The Judds, Merle Haggard and Reba. Before Taylor was even a year old, her Mom and Dad  took her to her first concert, a taping of a show called Nashville Now on TNN. While at the taping, she ended up being held by Minnie Pearl. That was her first celebrity country music experience.  Yes, a very interesting way to start a concert going career. When she got a little older, she would convince her Mom and sister to take her to Diamond Rio, Clay Walker and Tracy Lawrence. When Taylor started earning her own money, her first concert was Tim McGraw, Faith Hill and Keith Urban on the  Soul2Soul Tour.

Very surprising for a superfan, Taylor hated her first Eric Church concert in 2008.  Taylor was a fan of his songs being played on the radio and wanted to see him live at a music festival in Huntsville, Alabama.  This was back in Eric’s early and wilder days.  After sitting through Eric’s set, Taylor decided that Eric’s music was not for her. She did not like his performance and did not feel a connection with him. Right after the concert in Huntsville, Taylor headed to The Grand Ole Opry, where, ironically, Eric was playing. This time as Taylor watched Eric she left with a whole new feeling. Now she was a fan of Eric Church and she could not wait to see him again.

CN: So Eric Church’s fan club is known as The Choir. With you being such a superfan, do you have another title, or is there another level of fans?

TH: Oh no, we are all just The Choir. There is an unofficial 100’s club. I think Keith Urban has the same thing. There are a bunch of us who have been to a 100 or more shows, so I’m kind of in that.

CN:  Is there one concert that you have gone to that stands out as your favorite?

TH: There is. For my own personal reasons, it was my 100th show in Sacramento.  My friend Jane gave me a sign that said “100 SHOWS, THANKS CHIEF, JO & ECB!” I held up the sign and Eric said, “I already know.”  He walked to the back of the stage and brought me a special drum head that was signed by the whole band. 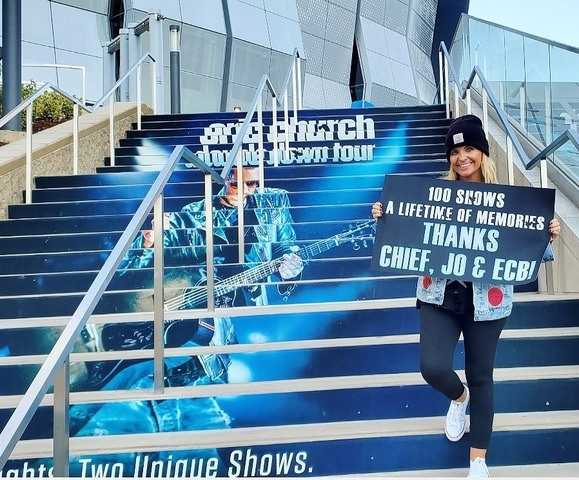 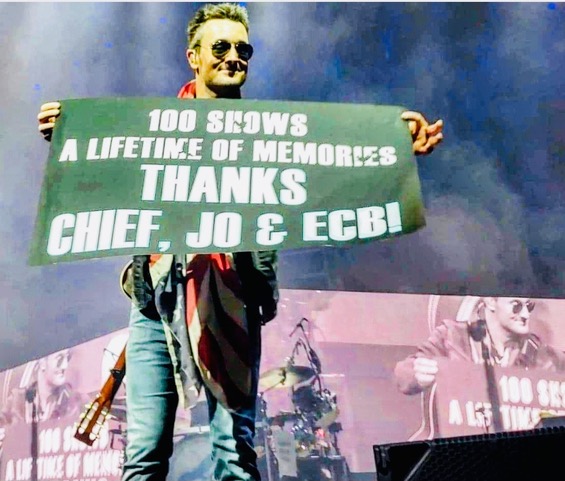 CN: How did he know?

TH: I don’t know, that’s one of the reasons why I love him. He has such a connection with his fans.  I had no idea he was going to do that. It’s been a great ride and I wanted to thank him for it. I still get goosebumps thinking about it.

CN: Do you collect memorabilia?  Do you have any special pieces?

TH; I do. I have it displayed in a corner of my living room. A couple of years ago,  there was a festival here. The radio station had a contest for a signed guitar. I never thought I would win and then the radio station called to tell me I won the guitar. I have it hanging on the wall. I have a friend who lives in Newfoundland.  She is a painter and took a picture that I took at the Opry right after the Route 91 Festival and made a painting of it. She sold copies to make money for the Route 91 Foundation. She sent me a copy of it and it’s on my wall. I have a few signed albums. Most of it I do not display, but someday I will set it up. From the Blood, Sweat and Beers Tour, when Eric played Jacksonville, as he was finishing up, he took his sunglasses off and he handed them to me. I have them on a shelf. 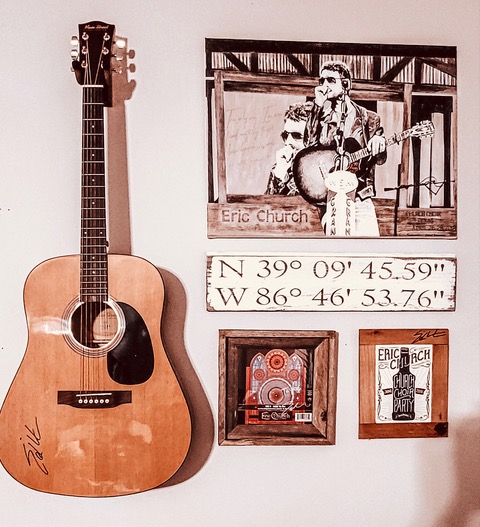 CN: How many times have you met Eric?

TH: Oh my gosh, I don’t know, I probably should have thought about that… I don’t know, probably 10 times or so. The best ones were not planned or meet and greet. When we were going to see him at the Nissan Stadium, we went there and slept outside the stadium. It was about midnight and sure enough here came Eric and some of his people. They came up with a bottle of Jack Daniels and hung out for about 45 minutes. He just stood around and talked with us. He didn’t have to do that but he took the time to.

CN: What is the longest/farthest distance you have traveled to see him?

TH: I have seen him in 27 states so far. The farthest away we have seen him is California. We have been to Connecticut and Massachusetts. I think the craziest thing that we have done is this;  he played back-to-back shows in Tuscaloosa, Alabama, the next night he played Orange Beach, and as soon as Orange Beach was over, we got in our cars and drove to Atlanta. We ran through the airport to catch a flight to Philadelphia to see him in Camden, New Jersey.  That’s the craziest thing that I have done.

CN: Did he see you and know that you had done that?

TH: He did. We had front row seats that night and Eric came up to us, shook our hands and said,  “Y’all travel more than I do.” It was fun. Who needs sleep when you are chasing Eric Church across the country?

CN: What do your friends think of your Eric Church Superfan status?

TH: The funny thing is most of my friends are also Eric fans.  That is where most of my friends lie. Once you start traveling and seeing the same people two or three times a month that’s who you talk to all the time and become friends with. It’s been tough this past year not seeing everybody. We have met so many incredible people because of Eric. 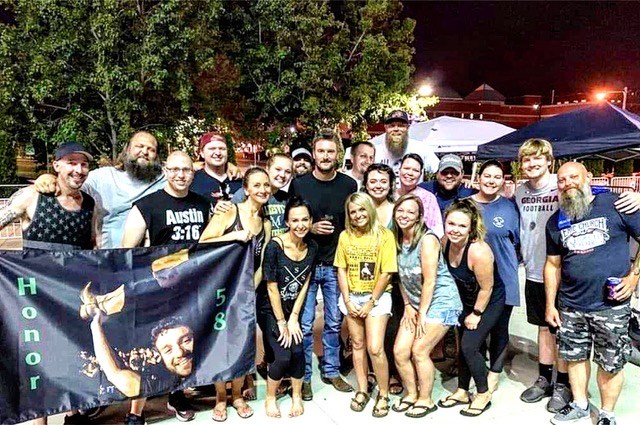 CN: With the new music coming out, what form do you buy it on?

TH: I much prefer the album. I think that’s what sounds best. It takes on a lot of different sounds. I think he wants it heard that way. Recently, I was up about three hours early waiting for the fan club presale of the new  album.  Every time something drops, it’s hard not to buy it. Once you start collecting the albums, you don’t want to stop. I get them all.  Why just get a couple?  I have had a lot of albums signed. I always try to buy at least two so I have a backup.

CN: I have to ask, were you at the Route 91 Music Festival in Las Vegas?

TH: I was not.  We planned to be there and we had tickets. There were about 15 of us that were going. All 15 of us ended up staying home for no reason. We just all ended up not going. Not going never happens. I struggled with it, knowing that I was supposed to be there and wasn’t. Afterwards, I was at the show Eric did at the Opry. You could see Eric’s pain while he played. It was healing being there. The Church Choir is a close knit family. We look out for each other, and us all being there was needed. 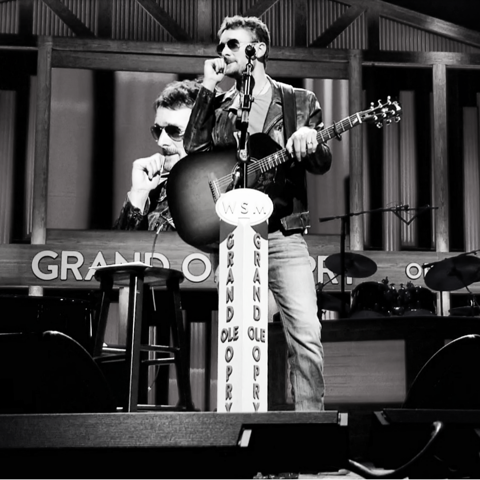 CN: We’re going to wrap it up with something fun called “One Grab”. Here is the scenario: You are running out of your house and your family and pets are all safe and with you. You can run back into the house to grab one thing…what do you grab?

TH: Honestly, it would probably be my signed drum head. I know that’s like a really terrible answer. but it holds so many memories.  It holds a hundred memories of shows all in that drum head.

CN: Thank you so much Taylor, this was a lot of fun. 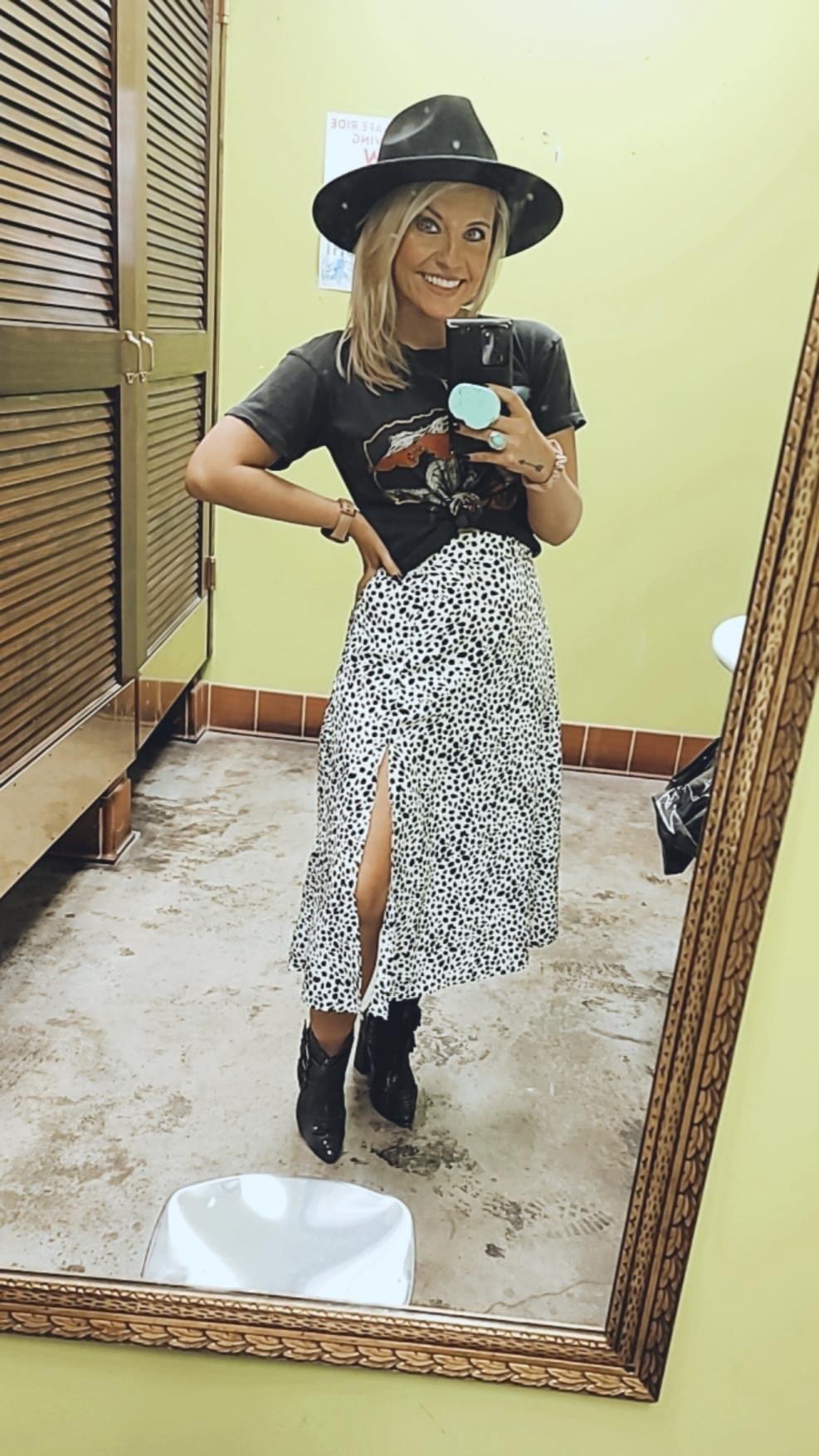