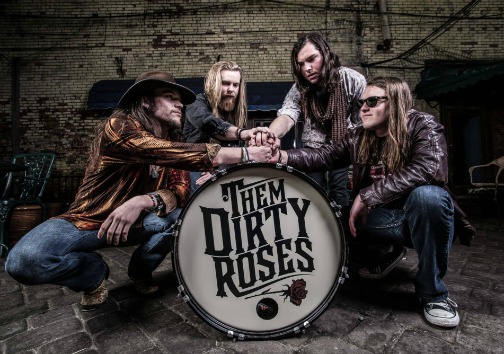 Them Dirty Roses released their album ‘Trouble’ on April 9 2016, a day after i saw them on stage at the Pepsi Spring Jam in Panama City Beach. The band may not be a name familiar to many in the UK, so let me introduce you – lead singer James Ford and drummer Frank Ford are brothers, with lead guitarist Andrew Davis and bassist Ben Crain completing the band.

I loved their energetic live set and was excited to check out their new 7 song record. It kicks off with my favourite song on there, ‘Songs About You’, which has an edgy guitar riff intro and a catchy chorus that makes me wish i was sitting on a porch in Southern USA drinking champagne and moonshine. Upbeat second track ‘Molly’ is another favourite, that has me singing along “Oh Molly, we’ve been walking on sunshine” every time i play it.

The band got their name after a situation while walking down Broadway in Nashville, in which one of their friends said: “I’ll give you $10, but I don’t want them dirty roses”. Although they’ve known each other for a long time, they came together and played their first show as Them Dirty Roses back in 2012.(http://www.gulfcoastjam.com/artist-spotlight-them-dirty-roses/)The biggest thing that stands out for me throughout the whole record is the guitar in each track is just incredible. ‘Back Home’ slows it down a little and showcases James’ vocals. Title track ‘Trouble’ is about finding yourself being swayed from doing the right thing. “I have trouble doing the right thing”. It’s been said before that the band have a unique sound, and I agree with this. I don’t think there’s anyone i’ve listened to recently that pulls off the southern roots rock and roll sound, and charm, like Them Dirty Roses do.

‘Grew Up In The Country’ really focuses on their small town Alabama roots. I love the way the whole album blends southern rock with a twang of country.

Them Dirty Roses have cited Chris Stapleton as someone they would love to collaborate with, and i think it would work really well. I’d love to hear that song!The album finishes with ‘Fix You’ and ‘Head On’, the latter being a duet with Kirstie Lovelady, which finishes off the album perfectly. Their music is definitely worth checking out, and their live show is even better. I also had the pleasure of meeting them when i was in Florida, and they are genuinely lovely guys too. I hope we get to see them head over to the UK soon!